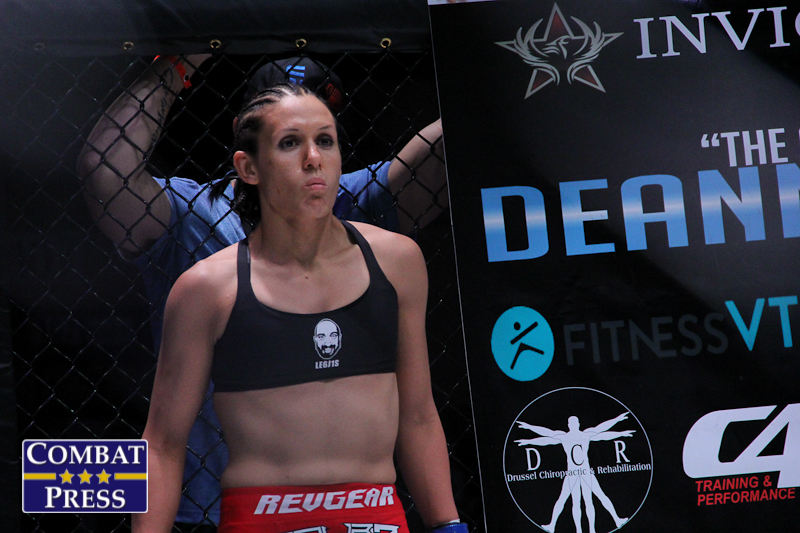 Her heart is heavy. It’s been scarred by the loss of her closest friend.

Invicta FC fighter DeAnna Bennett lost her father to cancer over the 2016 holidays. They shared a bond that was strengthened by their love of mixed martial arts. Her father provided her with a support system as strong as any that could exist, but now she brings his memory with her to the Invicta cage. It’s a cage she’ll return to this weekend after an extended absence. Now, she’s motivated to return to the form that led to an 8-0 start to her career.

“No matter what I wanted to do, he was always there to support me,” Bennett told Combat Press. “I could have the craziest ideas in the world, and he’d be like, ‘OK, just make sure you’re ready and do everything you can, and you’ll be great.’ It was the same with fighting. He completely supported me with doing it. He didn’t want to see his daughter get up there and get hurt or anything, but he knew it was something I wanted to pursue and so he supported me.

“There have been two people that have been up to every fight, amateur to pro, and he was one of them. Having him there meant the world to me. He would fly in, he’d get there just in time that the show would start, and he would usually have to leave the next morning, and it meant the world to me. He always made it a point, no matter how little time he had, to at least make it there, because it meant something to me just to have him there in the stands.”

Bennett’s father was exposed to MMA when she was just a teenager in high school. California has always been a hotbed for MMA, back to the earliest days of the sport. It was here that Bennett first came to learn about MMA.

“My dad was a retired San Jose police officer, so he used to always work the stand-bys at the Strikeforce shows there,” said Bennett. “He loved it. He would come home and tell me about it — ‘Oh, I saw this one female fight, Cris Cyborg, and she was crazy.’ He loved it, even before I got into it or even thought about getting into MMA. He loved it and would tell me about it, and he was so excited it.

“He never pressured me to get into it — it’s something I found my way into myself — but he was always my number-one supporter, because he had seen these fights before and he loved the sport.”

It was August 2016. It was just another routine day of working and training up until the phone rang. That’s when Bennett’s life would change drastically. The voice on the other end of the line delivered the heartbreaking news.

“I had just got done with work and I was driving up to Jeremy Horn’s gym, like normal, how I would always train. I was heading up there, and my sister called me [and] told me that my dad had gone in for a biopsy surgery because they found something in a CT scan and that there were complications,” Bennett explained. “They didn’t know what was going on, and so the very next day I took a flight to Michigan and was there when they told him the diagnosis, and it was… one of the worst days of my life, just being there and hearing the doctor saying he has glioblastoma multiforme — so, multiple brain tumors.”

When Bennett shares stories about her dad, there’s no missing the pain in her voice. She fights to retell the stories without breaking down. She reminisces about the times her father would be the one she’d turn to when she needed to get through tough times. The phone calls on days when training went sour.

Bennett’s strength through such a tough time is admirable. It’s aso another lasting legacy passed on through her father’s guidance.

“Everyone kinda hits rough times,” said Bennett. “Things don’t go according to plan. And the best advice he gave me was, ‘OK, well, what are you going to about it? Are you going to sulk? You can take a day and be sad, but then if you want anything to change, you have to do something about it. You have to get back in the gym, put in more work [and] make it into a better situation.’

“He encouraged me to get right back in there, in the gym, and train again. After my last fight, it was a lot of emotions between fighting and personal life and everything. He told me, ‘I know things are tough, but you have to keep going. Do you want to compete? Do you want to do this? Because if you do, you have to get in there and put the work in.’”

Bennett has put the work in. Now, the time to fight is just days away. Bennett hopes the match-up with Jodie Esquibel at Invicta FC 22 in Kansas City, Mo., will move her one step closer to a title shot. It’s an emotional process, but one she is determined to get through and enjoy. She has one more wish from her father to fulfill.

“The last words my dad ever said to me was ‘fight’ — him saying to fight,” said Bennett. “He loved watching me do it and he knew I loved it, so he wanted to support me with it. The last thing he wanted was for me to get in there and compete. That was his last wish for me.”

Her closest friend — her father — might be gone, but Bennett isn’t giving up. His influence and support lingers, and it will drive Bennett to overcome anyone put in her way.