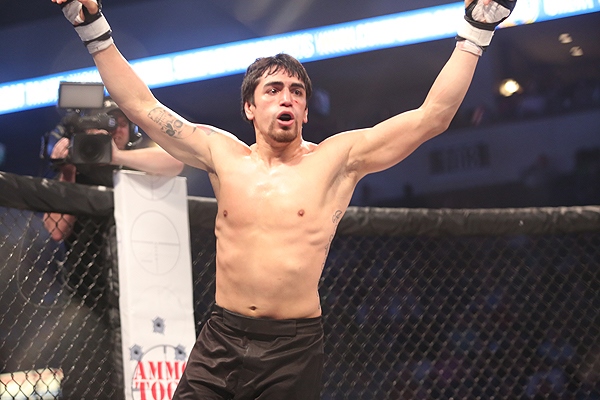 Usually when a friend tells you that you look like death, it’s not meant as a compliment. However, that may have been exactly what Kevin Aguilar’s manager meant when he shared that observation with Aguilar prior to his mixed martial arts debut in 2009.

“We were getting ready to go out to the ring, when they still had MMA fights in rings,” Aguilar told Combat Press. “My manager turns to me and says, ‘Kevin, you look like the embodiment of death.’ I said, ‘Really?’ And he showed me some pictures of myself and I said, ‘Cool! The Angel of Death.’”

The nickname stuck and was a culmination of a lifelong passion Aguilar held for the martial arts. He dreamed about competing while growing up in rural Texas. He played football and ran track in high school, but moving to the “big city” of Longview, Texas, just a couple hours’ drive east of the Dallas-Fort Worth area, finally gave Aguilar a chance to pursue his dream.

“I moved to Longview as MMA became popular, and I went into a store one day and the guy behind the counter was a MMA fighter,” said Aguilar. “He told me about a MMA gym that had just opened up in town, and it was exactly what I wanted to do. I realized I had a knack for it, and I wanted to pursue it.”

Aguilar received another taste of the big time early in his MMA career when, in only his second pro fight, he competed on the undercard of a Bellator MMA event in 2011. He took a first-round knockout victory over Matt Hunt.

“I was honored to be picked to fight by Bellator, and I was nervous to be on the big stage with all the big media there,” Aguilar said.

Another dose of the big show awaited Aguilar in 2013, when he faced UFC veteran Leonard Garcia in the Legacy Fighting Championship promotion. Aguilar was finished by Garcia in the first round, but he considered it an honor to fight Garcia.

“I have a lot of respect for Leonard,” Aguilar said. “He humbled me. It made me go back to basics and let me know that if I’m not on my toes, I can get finished.”

Aguilar took a little more than a year off following his loss to Garcia.

“I went back to the drawing board. I wanted to get better,” he said.

He did get better.

Aguilar has won three consecutive fights since the Garcia loss, all under the Legacy FC banner. He even captured the Legacy FC featherweight title with a split-decision victory over Tony Kelley last year.

“That fight took me into deep waters,” Aguilar said. “I had never gone five rounds before, and it let me know that I have the cardio and that I can take a shot and give a shot. It was a tough, bloody fight, and Tony Kelley wanted to win, but I wanted to win it a little more.”

Legacy FC officially merged with the Resurrection Fighting Alliance at the beginning of 2017 to create the Legacy Fighting Alliance. Aguilar remains on the roster of the new promotion and will face UFC vet Damon Jackson, whose record sits at 11-1, at LFA 4 on Friday, Feb. 17, for the inaugural LFA featherweight title. Aguilar and Jackson were supposed to fight each other previously, but Aguilar had to withdraw after suffering a back injury.

“They found [Jackson] a replacement opponent and he won and started talking a little smack about me, and saying that my back wasn’t really hurt,” Aguilar said. “But I’m going to show him 100 percent of Kevin Aguilar and show him that respect is earned, not given. It’s going to come down to who has the better skill and technique, and I want to put on a great show and I hope he does too.”

Aguilar is excited to compete for LFA after making Legacy FC his home for the last four years.

“It’s great that the shows are close to home in Texas,” he said. “The crew who work there are awesome and they treat fighters with respect. For them to call me to come fight for them is an honor, and I want to put on a show for them and don’t want to disappoint them. They want to help the sport grow with getting better fighters and competition. I have nothing but respect for this merger.”

Although Aguilar is happy in his remodeled home in LFA, he plans to take his career all the way to the top.

When he gets there, he has a dream opponent in mind: UFC lightweight champion Conor McGregor.

McGregor and the rest of the UFC roster better watch out. The Angel of Death is on his way.