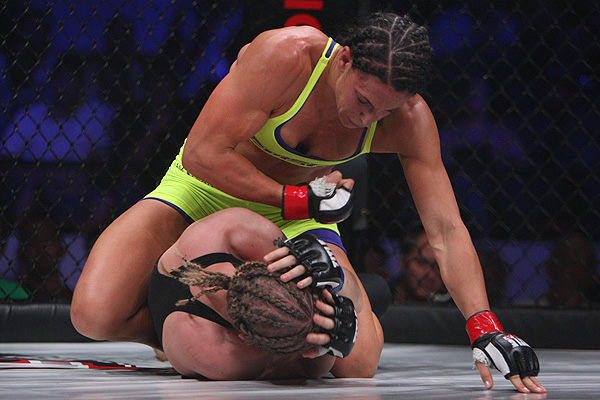 Bellator MMA is heading back to Oklahoma and the Winstar Casino in Thackerville for Bellator 174.

The main event of the evening takes place in the women’s featherweight division for the vacant title. Marloes Coenen has long been a staple of the women’s featherweight division and at one point held the Strikeforce bantamweight championship. She will look to bounce back from an upset loss to Alexis Dufresne when she meets Julia Budd, who is riding a seven-fight winning streak with her last three wins coming under the Bellator banner.

The co-headliner features one-time prospect Chris Honeycutt against former Bellator middleweight title challenger and UFC veteran Kendall Grove. Honeycutt is on a three-fight winning streak. His last win came over undefeated prospect Ben Reiter. Grove is coming off a loss in his last fight against Alexander Shlemenko and will look to use his fight with Honeycutt as a launchpad back into the title picture.

Fernando Gonzalez returns to action in the welterweight division against Brandon Girtz, and Joe Taimanglo will try to get back in the win column when he takes on Steve Garcia, Jr., in a bantamweight affair.

Marloes Coenen and Julia Budd headline the Bellator 174 card in a clash for the vacant women’s featherweight title. Can Budd keep up her long string of success, or will Coenen return to the top? In addition, is Bellator making a mistake by burying another women’s featherweight fight — Alexis Dufresne’s bout with Gabrielle Holloway — when that fight features a woman who just recently handed Coenen a loss?

This is a tough pick. Coenen has long been one of the best featherweights on the planet. Her fight against Dufresne left a lot to be desired, though. Her outings with Bellator have been some meatballs tossed right down the middle of the plate, and Dufresne should have been another easy victory to set Coenen up with a winning streak as she approached a shot at the title. Now, we’re in a completely different spot.

Coenen has not looked like the top featherweight she once was. The Dufresne fight shines a spotlight on her decline. Coenen’s grappling has won her many fights, but she couldn’t find a way past Dufresne. Budd is going to be a tough out, too.

Budd has been rather dominant in her Bellator run, albeit not really in the most exciting of ways. Budd’s only two career losses came against former UFC women’s bantamweight champ Ronda Rousey and current UFC bantamweight titleholder Amanda Nunes. Also, interesting to note, Budd holds a victory over current UFC featherweight champion Germaine de Randamie. That’s some serious competition, and Coenen just isn’t nearly at that level anymore.

Budd will use her size to pick apart Coenen from the outside and, if need be, to put Coenen on her back. It won’t be the most exciting of victories, but it’ll be a victory for Budd nonetheless.

With that in the rearview mirror, is it a mistake to bury Dufresne’s fight?

There isn’t a simple answer to that question.

Yes, it is, because Dufresne very clearly was the winner against Coenen and really made a comeback after her abysmal UFC run. Sure, the weight thing is an issue that will need to be addressed, but she won the fight. How does Bellator reward her for beating one of the big mainstays in the 145-pound women’s division? The company put her on the undercard and placed the fighter she beat on the main card, in the main event, fighting for the title. It makes zero sense to have Dufresne where she is based on merit.

Yet, the answer is also no, because Dufresne doesn’t sell like Coenen. Coenen is a recognizable name. People know her by reputation. She has fought on major cards before and has been built up by Bellator. There is zero promotion behind Dufresne. This is the world we live in, where the fighters with the most buzz edge the ones with the most merit for the rewarding spots. Coenen is clearly going to be the woman to draw the most attention, so it makes sense to have her in the main event and Dufresne on the undercard.

Bantamweight fighter Joe Taimanglo served up a setback to rising contender Darrion Caldwell in mid-2016 before losing the rematch late in the year. Welterweight Fernando Gonzalez came close to accomplishing a similar feat when he took Michael Page the distance before losing a split decision. Can either Taimanglo or Gonzalez become a fixture among the contender’s mix in their respective Bellator division?

Taimanglo was a pleasant surprise on his run through the bantamweight division. I didn’t pick him either time to beat Darrion Caldwell, but the first fight really showed that he can hang and be one of the best bantamweights on the Bellator roster.

Taimanglo already has impressive wins against Caldwell and UFC veteran Sirwan Kakai. With the win over Caldwell, Taimanglo made himself something of a staple in the division already. If Taimanglo wasn’t seen as a possible contender, Bellator would have written his win off as an anomaly instead of giving Caldwell a rematch.

Taimanglo has shown himself to be a well-rounded fighter. The first Caldwell fight was a demonstration of how tough Taimanglo was to pull out the win in the final round. The second fight didn’t go his way, but Caldwell has been an excellent prospect for some time and is a future champion for Bellator.

Meanwhile, Gonzalez was something of a journeyman before he went on a five-fight winning streak in Bellator. It was an incredible run against fighters he wasn’t expected to beat. However, Page did kind of end the hype train. Gonzalez was really gathering some steam. If he had been the guy to defeat Page, it would have been the cherry on top. He’d need to beat someone like Page to become a contender. He needs a signature win before we’re talking about him as part of any title mix. He came close against Page, but close doesn’t count in MMA.

Treston Thomison and Emmanuel Rivera. Thomison has looked good in his last couple of fights, winning both by submission. Rivera has fought a couple of times for Legacy and won his first four fights by knockout. Thomison is a good test for Rivera. Thomison has six fights for Bellator and has become something of a veteran for the promotion to throw at newcomers. Rivera, with his undefeated record, certainly fits the bill.