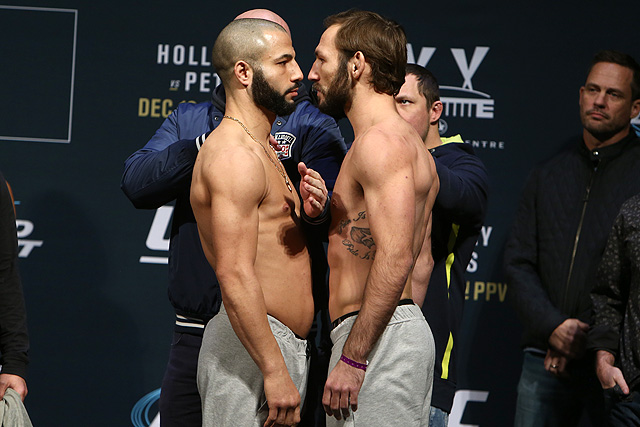 Knockout of the Year – Lando Vannata vs. John Makdessi (UFC 206)

Arguably the most exciting aspect of MMA, knockouts are a thing that fighters train for, fans pine for, and, yet, when it happens, a knockout still has people jumping out of their seats. 2016 was a year full of great knockouts. As always, there were exciting knockouts across all divisions of all promotions, but a few really stood out.

In early December, longtime veteran Gerald Harris came out of retirement to face the lesser-experienced Aaron Cobb at Legacy FC 63. Less than a minute into the first round, Cobb latched onto the front side of Harris with his legs around his waist, so Harris slammed his opponent into the mat, knocking him out. It was a great return for the vet after a three-year layoff, and a top-three contender for the best knockout of the year.

At UFC 201 in July, challenger Tyron Woodley entered the cage for the first time in 546 days to face then-champion Robbie Lawler for the coveted UFC welterweight title. Nobody knew what to expect when the two met, as Woodley’s time on the bench had many people expecting him to exhibit some ring rust. He proved the naysayers wrong. At 2:12 of the first round, Woodley blasted the champ in the face, sending him to the ground against the cage, and finished him with a flurry of strikes to capture the title. Again, another classic knockout for the year, but still not number one.

The best knockout of the year also came under the UFC banner when longtime vet John “The Bull” Makdessi met Lando Vannata at UFC 206 in early December. The young up-and-coming Jackson-Winkeljohn prospect came in confident and ready to press the action. At only 1:40 of the first round, as both fighters were exchanging strikes, Makdessi circled to his right as Vannata threw a nearly effortless walk-off wheel kick that caught Makdessi right on the button to take his first win inside the Octagon. It was so beautiful that it easily takes the cake as 2016’s best knockout.