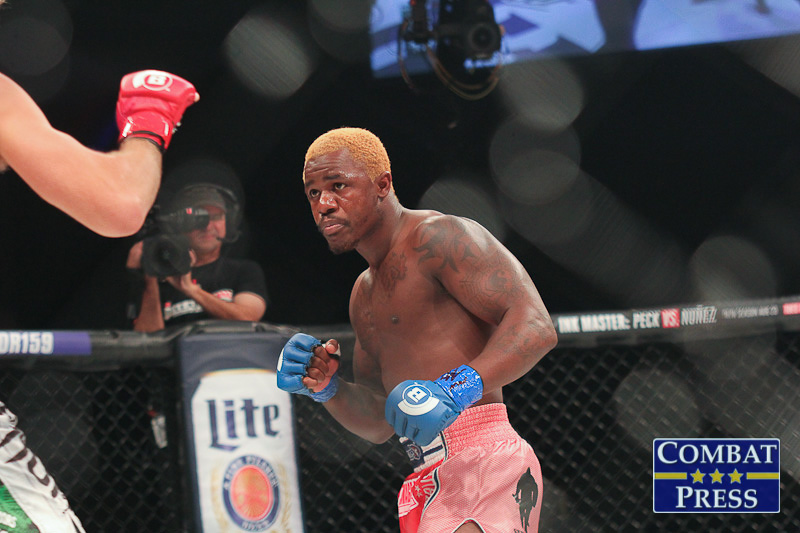 Bellator MMA packed in a bunch of stars for its last card, Bellator 170. Now, the promotion rides that wave into this weekend’s Bellator 171 event.

Bellator 171 takes place in Mulvane, Kan. at the Kansas Star Arena with a four-fight main card. The headliner features UFC veteran Melvin Guillard, who is out to bounce back from a loss when he goes up against rising welterweight Chidi Njokuani. In fact, Guillard will look to snap a three-fight skid in his first fight since a no-contest against David Rickels. Njokuani would like to extend his long winning streak and earn a chance to break into the upper echelon of Bellator’s welterweight division.

The co-headliner takes us to the lightweight division, where the aforementioned Rickels, a favorite with the local Kansas crowd, meets Aaron Derrow. Rickels will once again be on the top portion of the card in his backyard of Kansas. This also marks his first outing since the unfortunate no-contest call against Guillard. This will be the fourth co-main event spot for Rickels in his last five fights.

The Kansas crowd will also be treated to exciting prospect A.J. McKee, Jr., who will look to continue his unbeaten run when he faces Brandon Phillips. Meanwhile, women’s flyweight action will also take place on the main card when Jessica Middleton takes on Alice Yauger.

Bellator 171’s headliner between Melvin Guillard and Chidi Njokuani, which will be contested at a catchweight of 175 pounds, pits a veteran star against a man who is probably still best known for being the brother of a UFC veteran. That man, Njokuani, has been on an impressive run of seven victories, including three straight in the Bellator cage. Is this the fight that turns Njokuani into a Bellator title contender?

I’m a little hesitant to call him a real contender for the Bellator welterweight title. The division is as deep as they come in Bellator, and anybody would struggle to break into the ranks. What Chidi Njokuani has going for him is his flashy striking style that results in knockouts. Fans love to see big finishes, and his highlight reel could certainly draw in the eyeballs.

In Bellator, Njokuani hasn’t faced anybody that could boost him up as a possible title challenger. Andre Fialho, a knockout artist, is perhaps the biggest name on the list. Ricky Rainey, who holds a 4-2 record inside the Bellator cage and most recently defeated Gilbert Smith, might also be another noteworthy name. However, Rainey and Fialho aren’t the names you typically want to see as the biggest wins for a guy who is out to contend with the likes of Andrey Koreshkov and Douglas Lima.

Koreshkov is a huge mismatch for Njokuani. Koreshkov will most likely grind out Njokuani and neutralize the striking that makes him dangerous. Njokuani isn’t ready for that test, let alone one against Lima, the man who unseated Koreshkov as Bellator’s welterweight kingpin.

Guillard is a good start to increasing Njokuani’s level of opposition, but he isn’t the name he used to be. Njokuani simply needs to fight one of the top welterweights and get past them first before we talk about title contention. Njokuani will vanquish Guillard, probably by knockout, but then he needs to step up to the next tier of Bellator welterweights.

This card, which takes place just one week after Tito Ortiz and Chael Sonnen collided at Bellator 170, stands in stark contrast to its predecessor in terms of star power. It does feature David Rickels and A.J. McKee, Jr., but that’s about the extent of the “name” talent outside of the main event. Do Rickels and McKee come away with wins in their respective bouts? And are there any breakout stars to watch on the remainder of this card?

Both Rickels and McKee should come away with wins in their respective bouts.

McKee is a big, up-and-coming name for Bellator, and it’s hard to see the organization risking the potential he has to make an impact on the Bellator roster. McKee is perhaps the league’s biggest prospect and has looked great so far in his first six professional fights. His fight with Brandon Phillips will only help to elevate his status as a rising star.

Rickels is a really fun fighter to watch. The man just knows how to put on a great, entertaining fight for the fans. Rickels likes to add pressure and slug it out with his opponents. He is definitely one of the fan-favorites on the roster. Rickels really struggles with the top of Bellator’s lightweight division, but Derrow doesn’t exactly meet that criteria.

If we’re talking breakout stars outside of McKee, we’re going all the way to the undercard and into the heavyweight division. That’s where Tyrell Fortune resides. Fortune was one of the best collegiate wrestlers before making the transition to MMA. His transition to MMA put Fortune in a big spotlight as one of the best prospects not only in Bellator, a promotion that also signed another big-time collegiate wrestler in Ed Ruth, but in MMA as a whole. Heavyweight isn’t exactly a bustling department — even the UFC has trouble pinning down big names and prospects.

Fortune has a huge opportunity in Bellator to become the next big heavyweight. There are only a handful of guys in the heavyweight division that Bellator can really push, and it’s only a real handful if you count Muhammed “King Mo” Lawal and Quinton “Rampage” Jackson, who are true light heavyweights. Bellator’s heavyweight division needs a star, and that could very well be Fortune in another five or six fights.

Fortune’s wrestling is obviously top notch. If he can learn basic striking, both offensively and defensively, to help set up the takedowns or make his game slightly more two-dimensional, then he can be trouble for a lot of fighters. Fortune is only 26 years old and has a lot of time to put it all together.

Fortune’s fight against Will Johnson should be another good learning experience. At this stage, Fortune shouldn’t be rushed. He needs to be allowed the necessary time to develop. Fortune has an extremely high ceiling. He is certainly one to watch.

Jarod Trice is another one of the collegiate wrestlers Bellator snapped up. Trice was a three-time NCAA All-American at Central Michigan University. Like Fortune, Trice is another high-ceiling prospect who could be a potential big star for Bellator if he can get the basics of striking down and use those skills to complement his wrestling. Trice also has the luxury of fighting in the light heavyweight division, another rather shallow weight class for Bellator. This time, however, Trice will fight at the heavyweight level.

If Trice can succeed against Kevin Woltkamp, then it opens up two interesting paths with very little top talent in front of him. He can choose to remain at heavyweight, or he could return to light heavyweight. Regardless of the division he chooses, Trice can certainly succeed if he is afforded the time to grow into his own. Trice is only a year older than Fortune and has plenty of time left to develop into one of the better fighters on the roster and possibly even make a two-division run.

Outside of Rickels, McKee and Fortune, there isn’t really a compelling fight on this card. However, there is Gaston Reyno’s fight against Justin Overton. Reyno has a habit of finishing his opponent. All six of his victories came by either submission or knockout. Reyno’s last fight ended in a knockout victory over L.J. Hermreck in almost the closing minute of the fight. Reyno should pick up another finish against Overton.