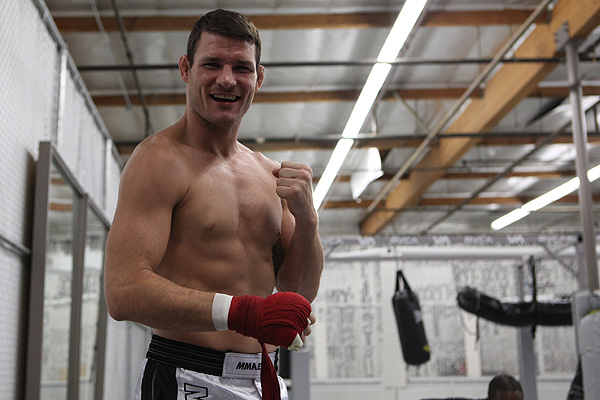 Michael Bisping has spent much of his career as the villain MMA fans love to hate. That role could be changing if an upcoming title defense against Yoel Romero comes to fruition.

Newer MMA fans will be surprised to know that Bisping was initially a fan-favorite of sorts when he won The Ultimate Fighter. One of the first international fighters to become a well-known name, Bisping had the personality to match his fighting skills. That fan support would quickly evaporate, though, through a series of events throughout his career.

A questionable split-decision win against Rashad Evans at UFC 78 brought some negative attention for Bisping. It was followed by an appearance by Bisping as a coach on The Ultimate Fighter.

It was on the reality series that we witnessed the rise of Bisping the villain. He had the deck stacked against him from the start, so it made sense for the Bisping to embrace the role of heel. He was the coach of Team UK, opposing a team of Americans coached by popular All-American Dan Henderson. Arrogant and loud, Bisping took every opportunity he could to get Henderson riled up. Of course, it failed, which only made Bisping look like even more of an annoyance to those that disliked him. Henderson eventually put the punctuation mark on Bisping with a big right hand that left the Brit out cold on the Octagon mat.

After a series of fights, Bisping would once again find himself among MMA’s most disliked fighters at UFC 127. Entering a showdown with Jorge Rivera, the two men engaged in quite a bit of trash talk that became very personal at times. This animosity boiled over when Bisping blatantly landed an illegal strike to Rivera during the contest. Bisping then headed straight for Rivera’s corner and spit in their direction.

While Bisping was among the most disliked fighters on the roster, he’d mainly failed to reach the middleweight elite. That all changed with the incredible run he’s been on since UFC 186. Now, the division is run by the guy nobody considered title material. He is more than happy to remind everyone how wrong they were.

Another fighter that’s on an incredible run is former Olympic medalist Yoel Romero. The Cuban fighter has left a path of destruction in his wake since joining the UFC’s ranks. A series of highlight-reel finishes propelled him up the rankings into contests with the best of the division. It’s one thing to win against elite competition, but it’s quite another to do what Romero has done. The way he handled the riddle known as Lyoto Machida, capping his performance off with a violent finish, was eye-opening for fans who hadn’t witnessed Romero’s talents in the cage. His victory over Ronaldo “Jacare” Souza was marred with controversy as fans argued who really won the fight. Still, a win over arguably the best grappler in the sport is nothing to scoff at.

Romero’s recent performance against Chris Weidman showcased just how far Romero has progressed as a fighter. He was having a fairly even contest with the former world champion until perfectly timing a flying knee to the side of Weidman’s head. Weidman had been finished before, but that was after an insane amount of punishment had been dished out by Luke Rockhold in their fight. This was sudden and violent, a trademark of Romero’s knockouts.

You’d think Romero would be heralded as the knight in shining armor, the hero to take down the arrogant undeserving champion. However, Romero’s standing among fans and his peers hasn’t matched the success he’s found inside the Octagon.

Much of this can be traced to what’s commonly referred to as “Stoolgate.” Heading into the third round against Tim Kennedy, Romero was literally saved by the bell in the second frame. He was in a world of trouble. Kennedy nearly finished the fight before the final round. Of course, what happened next is up for debate. Romero and his team claim they did nothing wrong, but it seemed clear the fighter was looking to cut a corner. Romero sat on his stool even after the minute rest-period ended, collecting precious extra seconds of recovery.

Romero’s win over Souza was a split decision, which means MMA fans will almost undoubtedly be divided. There were also a number of instances where Romero utilized a cage-grab to gain an advantage in a fight.

Even Romero’s win over Weidman was marred with controversy. Romero’s corner continually doused their fighter in water, and even Romero joined in, pouring water on top of his head and down his legs. The water, combined with his sweat, would obviously make it quite difficult for Weidman to secure a takedown. The excess water was wiped down, but once again the pause allowed Romero extra time to recover between rounds.

There’s also the fact that Romero’s status as a clean fighter has been called into question throughout his career. It’s not hard to see why, considering Romero’s age and impressive physique. He’s also shown incredible feats of athleticism that seem unfathomable. His drug-test failure earlier this year only validated those claims from his doubters. Even though Romero played the tainted-supplement excuse and receive a reduced suspension, the judgement was still passed.

We got our first glimpse of the pre-fight talk between Bisping and Romero during the Cuban’s post-fight interview with Joe Rogan. Talking to Bisping while the Englishman was on the Fox set, Romero certainly captivated MMA fans in typical Romero fashion. Even as Bisping made needle-injection motions and gave Romero the finger, Bisping enjoyed a chorus of cheers. Maybe it was the fact Romero was fresh off a win against the hometown boy Weidman, but it was strange to see Bisping on the receiving end of cheers from the fans. If a fight with Romero does materialize, Bisping will certainly have the crowd behind him, as well as seemingly the support of his fellow fighters.

If — and this is a big if — Bisping can put on an impressive performance against the surging contender, we could possibly witness one of the biggest turns in MMA history. You’d be hard pressed to find a large contingent of fans that would willingly cheer for the brash Bisping. Now, against a foe who has become a face of cutting corners in MMA, even Bisping himself might be surprised by the outpouring of support he’ll receive.