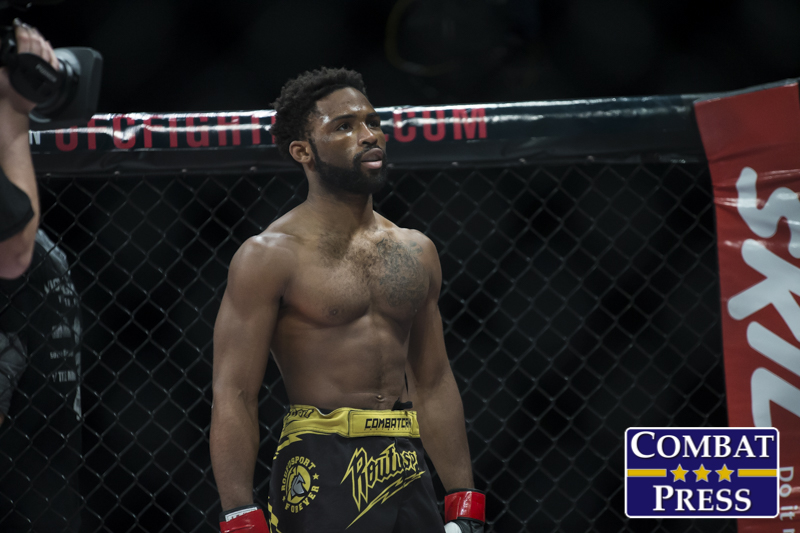 This week’s edition of Out of Obscurity comes a day earlier than usual, and with it comes the preview of a Wednesday evening event. Victory Fighting Championship has opted to host its 53rd event on the eve of the Thanksgiving holiday. The promotion ventures to Iowa for a card topped by a showdown between undefeated up-and-comer Raufeon Stots and veteran journeyman Jeff Curran.

The 27-year-old Stots posted a 6-1 mark as an amateur before turning pro in 2015 and reeling off six more victories. The Roufusport fighter even avenged his lone amateur defeat against Demetrius Wilson when he stopped Wilson via rear-naked choke in a Victory FC 47 fight. In addition to Roufusport, Stots has spent time at Miletich Fighting Systems and Premier Combat. He’s a two-time NCAA national wrestling champion who has finished two opponents with strikes and won two fights by way of submission. His last two stoppage victories came against seasoned veterans William Joplin and Charlie DuBray.

Curran will be competing for the 55th time as a professional. The 39-year-old has been around since the early days of MMA. He made his pro debut in 1998 in a losing effort, but within approximately four years, he had already racked up a 16-6-1 mark. It was at this point that he made his UFC debut in a loss to Matt Serra. “The Big Frog” has made subsequent appearances under the Pride, WEC, Strikeforce, Bellator, UFC and Resurrection Fighting Alliance banners. He challenged Urijah Faber for the WEC featherweight title, but suffered a submission loss in their fight. Curran has often come up short in those major leagues, with only a handful of wins to his name. Overall, though, the Team Curran fighter has registered 21 submission wins and 14 decision nods. He has only been stopped six times in his lengthy career.

Stots is a solid wrestler and striker, but he tends to lunge forward when throwing his strikes. This has allowed some of his opponents to kick his legs out from under him. While he’s quick to recover, someone who’s really on their game could use this to their advantage. Curran probably isn’t that man. He’s past his prime and never has been especially known for his striking repertoire. Curran will look for takedowns, but Stots has the youth and athleticism on his side and should be able to stuff his veteran opponent.

Curran is little more than a resume-building name at this point. He’s faced some true greats in his nearly two decades as a pro, but he has failed to find many wins in recent years. Curran has been out of action for nearly two years now, and he won just one out of his previous five outings. His experience and submission savvy make him a constant threat to Stots, even when Curran is on bottom, but it’s a threat Stots should be able to avoid.

Stots could use his wrestling to keep Curran on his feet. It’s a smart game plan for a young fighter who should hold a healthy advantage in the striking department to go along with an edge in height and a three-inch reach advantage. Stots, through superior wrestling, should neutralize all of Curran’s offensive assets and turn this into a sparring session that the younger fighter can easily win, be it through a knockout or on the scorecards.

Vartanyan, 25, debuted in 2011 and suffered a loss in his first fight. He rebounded to win 12 straight and advance to the finals of an ACB lightweight tournament before he was submitted by Ali Bagov. He outworked fellow prospect Frodo Khasbulaev to earn an ACB lightweight title shot against Abdul-Aziz Abdulvakhabov. Vartanyan came up short against Abdulvakhabov, but bounced back in his next fight against Márcio Breno. The Russian has scored six finishes via strikes and three submission victories. He has been stopped in each of his losses.

The 23-year-old Shabliy has been fighting as a professional for longer than his opponent. “Peresvet” got his start in 2010 and won his debut. He finished his first four opponents before suffering a loss to veteran competitor Mamour Fall. Another four stoppage wins followed and then he endured another defeat, this time at the hands of veteran Arsen Ubaiulaev. Shabliy turned around to avenge that loss in his very next fight. He added another six consecutive victories, all of which came by finish. Overall, he has eight wins by some form of knockout and seven submission wins. He has been submitted once and dropped one decision.

Despite a pair of losses on his record, Shabliy has been the more consistent fighter. He is a strong finisher who has dispatched 13 of his opponents in the first round. Vartanyan, while also a top Russian fighter, could be overwhelmed early by Shabliy’s aggressive approach. Of Shabliy’s last seven fights, only two have lasted beyond the two-minute mark. This one should be fun while it lasts, but it won’t last long.

How do you test the worth of a prospect who has gone undefeated through 18 contests? How about throwing him in against a UFC veteran? That’s the answer Zst has come up with for its 54th event, where undefeated prospect Go Kashiwazaki meets UFC vet Motonobu Tezuka in a clash of bantamweights.

After debuting with a fight that ended in a draw in 2005, Tezuka built a 19-4-4 record while fighting in a number of Japanese promotions, including Pancrase and Deep, to earn his way into the UFC. The Cobra Kai MMA Dojo export provided a tough opponent for UFCers Alex Caceres, who scored a split decision against the Japanese fighter, and Vaughan Lee, who earned a unanimous verdict in his fight with Tezuka. After his two Octagon losses, Tezuka departed the UFC and landed back in Japan. He has since gone on to compile a 8-6-2 mark over his 16 post-UFC outings. Most of Tezuka’s wins in that span came via stoppage, whereas his losses typically were the result of a judges’ decision. Overall, the 29-year-old has seen the scorecards 29 times. Meanwhile, he has recorded eight submission victories and four wins via strikes.

Kashiwazaki is a true prospect. He checks in at just 20 years old, and he’s already registered 18 fights with 16 wins. The K-Place fighter has been a fixture in Zst since he arrived on the scene in 2012. He scored his first six wins by armbar before fighting to a draw with Ken Kawamura. He used strikes to dispatch of his next two opponents. Kashiwazaki then ran into another stiff challenge that resulted in a draw against Takao Ueda. He’s won every fight since then, including two via strikes and five by choke submission. Along the way, he claimed and defended the Zst bantamweight crown. The youngster’s resume includes victories over such notables as Shooto Watanabe (twice) and Keisuke Fujiwara (for the title).

This could be the fight that lands the young Kashiwazaki in the UFC, assuming he can get past Tezuka in impressive fashion. That could be easier said than done. Kashiwazaki has fought to a draw with two rather mediocre opponents. He has topped the aforementioned Watanabe and Fujiwara, but Tezuka is easily the best fighter this kid has faced in his young career.

Tezuka is a tough scrapper who won’t go down easily. He has a habit of grinding fights out, regardless of a win or a loss. Kashiwazaki will have to prove himself in what should be a lengthy affair that goes the distance. Tezuka is going to make this a tough fight, and his experience might be the difference he needs to pull off a win over the young prospect.