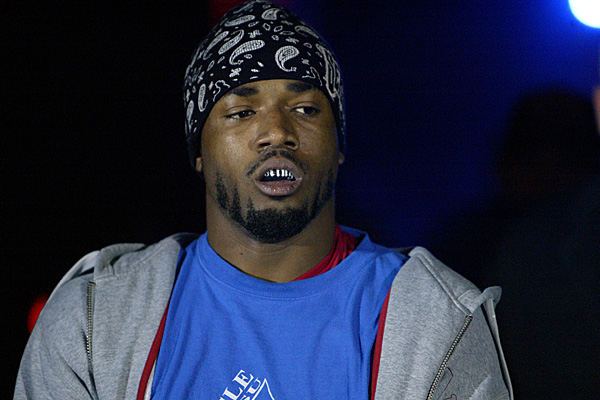 These are the injuries. All of them could have ended his career, but they didn’t.

UFC lightweight fighter Bobby Green has had to endure and overcome a lot on his way back to the Octagon. The fractured ankle led to his removal from a scheduled fight with Jim Miller. The torn quad — one that left roughly 70 percent of the muscle detached — kept him on the sidelines even longer. And when he was just about to make his return to the UFC, the third of these devastating injuries occurred.

“I was getting ready to fight Al Iaquinta and basically, sparring with a partner, bent it the wrong way and blew my knee out,” Green told Combat Press. “I had my doubts, like, ‘You’re done.’ When you can’t walk for a long time, going from one surgery to another, and trying to get your legs back, and my movement, it was very hard physically and mentally. But my doctors said I could come back from this surgery, so that was always my hope.”

Three surgeries in such a short span of a fighter’s life can understandably leave the fighter questioning whether they can continue their combat career. Green admittedly had his doubts, but there also came a renewed sense of focus and maturity in the lightweight contender while he was recovering.

“The injuries just made him reflect on his life,” said Green’s coach, Jake Behney, head instructor at Pinnacle MMA. “As his coach, this has been the most matured growth that I’ve seen in Bobby in the eight years I’ve been working with the guy. He’s just been more mature in life and more professional about his job and career, and that’s what I believe he’s learned from dealing with these injuries.

“When you’re idle and you can’t do something and now you’re not even mobile, all you have is just isolation. You evaluate every area of your life. Now you have people telling you that you can’t do this anymore. The mind plays so many tricks on yourself, and he just used that and people telling him he’s done as motivation this whole camp. Every practice has been to the best of his ability. He’s just changed.”

Green has been pushed like never before, getting in work with those that haven’t doubted him. These people have been key components to what he hopes is a successful comeback. Training partner Jamall Emmers, who fights the day before Green for the RFA lightweight championship, has been there every step of the way, getting in rounds with Green and further building on a brotherhood that exists within the California gym. And then, of course, there’s been his coach, Behney, who has built a strong relationship, almost a father-son type bond, that began when Green stepped foot in his gym.

“I feel like he’s a representation of loyalty,” Green said of Behney. “When I have been down, Jake has always been there to support me, motivate me and keep me going. I came in with a buddy to train one day at his gym, just going to support a friend, and I fell in love. I like how Jake deals with his fighters. He’s very in touch with his guys. He wants to know how you are. He wants to be there, and I’ve never had anyone who’s ever cared like that.”

The support has been felt and the love has been given, and now the fighter nicknamed “King” will seek to become the “comeback king” in a matter of days when he opens the UFC 199 pay-per-view card against Dustin Poirier. The devastating injuries have healed and Green is out to make a statement in the crowded lightweight division.

“I’m anxious to get back in and show my skills. I’ve been gone for so long, I feel like I’ve been on a vacation. And now everyone is like, ‘Who is this guy?’ So I’m looking forward to making a big splash back.”

Bobby would like to thank Mentom Eyewear, Venum, Asanti Wheels, OxyHealth for their awesome hyperbaric chambers, Active Life Chiropractic, MMA Gold Gym, Garden of Life Raw, CK Fight Life, SolRepublic Headphones for the best quality in audio, Jamall Emmers for helping throughout camp, and everyone else who has supported him throughout his comeback. Follow Green on Twitter: @BobbyKGreen
Advertisement