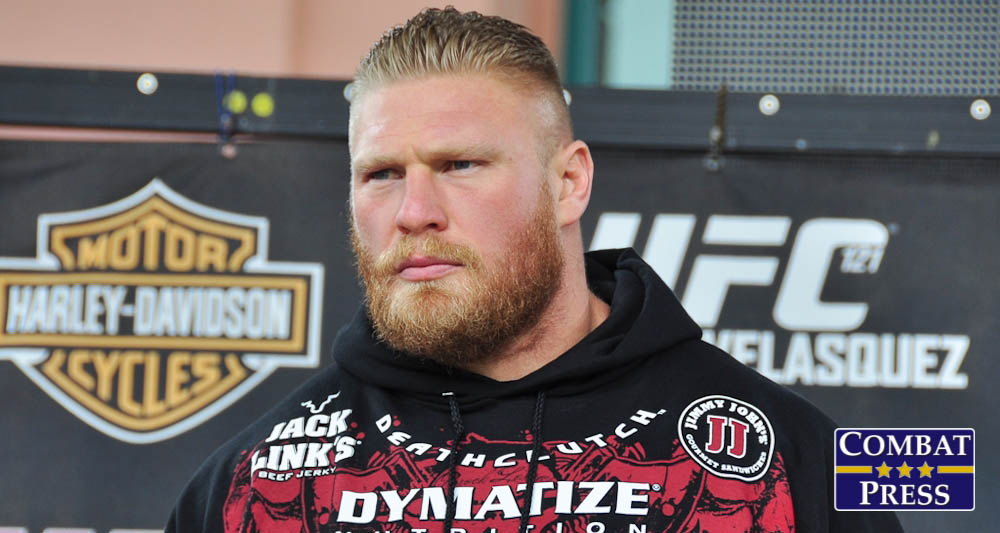 Brock Lesnar vs. Mark Hunt Should Determine the UFC Heavyweight No. 1 Contender

What could topple that beverage behemoth, you ask? What else? The UFC and the WWE, cross-promoting each other on their many platforms and raising the spectacle of live entertainment to a whole new level. Even if it would make a MMA purist’s head explode with rage, UFC fighters on Monday Night Raw or WWE superstars cageside at the next pay-per-view would do wonders for both professional wrestling and MMA.

How could this happen, you also ask? Again, it’s simple: make the fight between Brock Lesnar and Mark Hunt at UFC 200 into a fight for the No. 1 contender spot for the UFC heavyweight title.

The UFC and WWE are already halfway there. The WWE decided to loan Lesnar to the UFC for a one-off fight with Hunt after Lesnar expressed regret that he didn’t have one more fight with the UFC before re-signing with the WWE last year. Also, let’s not forget that former WWE wrestler CM Punk is (finally) going to make his UFC debut at UFC 203 in September.

So, beyond the fact that both Lesnar and Punk made their names in pro wrestling before transitioning to the UFC, the worlds of pro wrestling and MMA have been intertwined for quite some time. Pancrase, one of the earliest MMA promotions, was formed by a group of shoot-style pro wrestlers. Once upon a time, Ken Shamrock and Dan Severn graced the WWE ring while also boasting careers in the UFC. The ignorant masses who know next to nothing about MMA or pro wrestling also often confuse the UFC and WWE for each other.

UFC President Dana White and WWE CEO Vince McMahon are basically the same person, albeit with roughly a 30-year age difference. Both are visionary egomaniacs who purchased their respective organizations at a time when the organizations only had modest followings. Both White and McMahon built their companies into behemoths that became the biggest names in their respective genres by a country mile.

White and McMahon also both treat the majority of their talent as expendable assets, except for the ones who go out of their way to get into the good graces of their boss. Hell, there was even a time when McMahon allegedly called White and proposed a wrestling match between the two.

But enough about the similarities between White and McMahon. If Lesnar defeats Hunt at UFC 200, the cross-promotion with the WWE can go into overdrive. However, if Hunt defeats Lesnar, he is every bit as deserving of a title shot. It would be Hunt’s third victory in a row. If Hunt finishes Lesnar, it’ll be his third straight win via knockout.

There are other contenders in the UFC’s heavyweight division, including former champion Fabricio Werdum, Ben Rothwell and Junior dos Santos. But a knockout victory for Hunt over Lesnar in a highly anticipated fight, on the most anticipated card in UFC history, should catapult Hunt to the front of the line. Don’t write off Hunt, either. Lesnar hasn’t fought in five years and, as we saw in his last two fights against Cain Velasquez and Alistair Overeem, he can’t exactly take a punch. It is fair, however, to wonder if Lesnar would have fared better had he not suffered from diverticulitis.

But just like learning how it was possible for Jon Snow to come back from the dead (spoiler alert), there are some things we’ll just never know. Lesnar is under contract to the WWE, so it’s all but certain his fight against Hunt at UFC 200 is a one-time thing before Lesnar goes back to being paid handsomely to work 10 days a year for the WWE.

But what if the UFC and WWE managed to reach an agreement to let Lesnar keep fighting for the UFC while wrestling for the WWE? Imagine if Lesnar appeared on Monday Night Raw with the UFC heavyweight title and simultaneously held the WWE world heavyweight title. That’s the kind of mainstream publicity that doesn’t come along every day. Simply put, a Lesnar victory at UFC 200, if it’s followed up on correctly, is a win-win situation for all parties involved, both in the Octagon and in the squared circle.