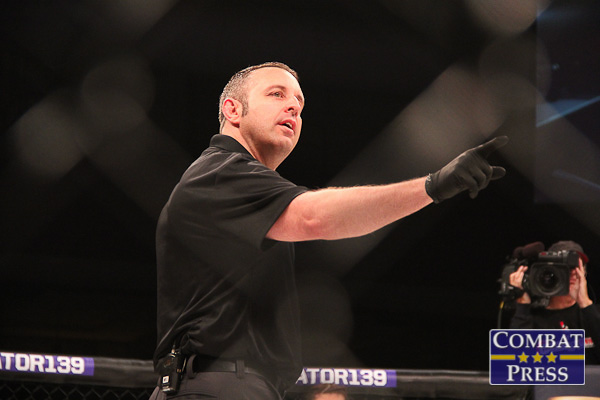 To say there was controversy surrounding Bellator 155 is an understatement. The evening was a series of strange events with none more mind-blowing than the headlining bout and its outcome. However, one of the judges cageside believes this uproar is overblown and misguided.

Rob Hinds is an official who has seen his fair share of fights. A seasoned referee and judge, Hinds was cageside for the anticipated Bellator 155 main event showdown between the promotion’s middleweight champion Rafael Carvalho and challenger Melvin Manhoef. The fight was expected to feature a number of powerful strikes from both men. Manhoef in particular is seemingly never in a boring fight. However, a pedestrian start turned into a bout that was more a staring contest than a fight. Was this fight the worst Hinds has had to judge in his career?

“I thought back, and yes,” Hinds told Combat Press. “Especially for a five-round fight. In my best memory, that’s one of the fights I’d like to do over again the least.”

Manhoef, normally an ultra-aggressive fighter, came out very conservative in the opening round. Carvalho respected Manhoef’s power and kept his distance. The opening round had only a single strike scored, courtesy of Manhoef.

CompuStrike, Bellator’s real-time stats provider, didn’t mince words when it came to the numbers and how the fight turned out.

It’s over. @MelvinManhoef finishes with a 40-29 edge in strikes landed, 11-3 in power landed @BellatorMMA #Bellator155

I guess 0.6 power strikes landed per round was enough to win a fight?

All 3 judges gave Carvalho round 1. He didn’t land a strike. @BellatorMMA

Hinds doesn’t believe the backlash is warranted given how the fight played out.

“It’s blown out of proportion more than any of us officials or commission people thought it’d be,” Hinds said. “As lackluster of a fight that it was and how little we had to assess in that fight, I found it extremely weird that people were that angry over it.”

The end result had Carvalho’s hand raised despite the champ being on the losing end of nearly every statistical category. There were multiple instances when referee “Big” John McCarthy warned both fighters about inactivity along with a number of fouls from Carvalho.

“John knows the procedure and when to do it,” Hinds said of McCarthy. “He’s never shaken by anything. At those times you have to trust someone like John to know what he’s doing and why he’s doing it. John always does a great job; he’s one of the greatest. There are definitely glaring mistakes that referees and judges make, but there was no mistake on John’s part.”

Some fans felt a point deduction should’ve occurred on more than one occasion. Yet, McCarthy gave multiple warnings and even dropped an F-bomb on live television. Had a point deduction occurred, it might’ve given the edge to Manhoef on the scorecards or, at the least, made the fight a draw.

“You can tell when someone is being careless,” Hinds said of deeming a foul to be intentional. “Like earlier in the night with Augusto Sakai’s bout. He had a kick that came right up the middle. He’s not a technical kicker to begin with and to throw from that angle, it doesn’t look good. It’s really hard to honestly pin someone down for something you’d call intentional or malicious.”

Even if Carvalho managed to avoid getting a point deducted, many thought Manhoef had done enough to take a decision victory. Looking at the numbers, it’s easy to see why. However, as Hinds explained, there’s more to a fight than just the numbers.

“We don’t judge fights. We judge round by round,” Hinds said. “All the damage [Manhoef] did was mostly in the second round and the fifth round. The other three rounds were lackluster with not a lot to go on. The only round we saw different was round four.”

Perhaps it was Hinds’ viewpoint which might’ve swayed his position on that pivotal round. After discussing with one of the other judges, Hinds admitted there were things that escaped the viewpoints of both men sitting cageside.

“Mike Bell was sitting directly on the other side of the cage,” Hinds said. “We talked after the event. He saw things that I didn’t see and I saw things he didn’t have the best angle on. We were quite surprised there was that much controversy over the decision instead of people being upset at the fight not being very good.”

Almost immediately after the decision was read, Bellator’s commentators Sean Grande and Jimmy Smith voiced their displeasure on live TV. Smith in particular didn’t sugarcoat his feelings on the matter.

“When I watched it back, all they talked about was Melvin Manhoef,” Hinds said. “When you listen to the commentary, it’s directed to Manhoef. Obviously, when there’s a split decision or something like that with them being upset by it, it definitely gets the fan base riled up. Definitely the way [they] handled it was unprofessional and a shame for them to deal with it that way.”

It isn’t new ground for the veteran official to be in the middle of a tough situation. He’s seen plenty of controversy in his day and believes it’s a case of misguided anger. Regardless of where Hinds believes fans’ frustration should be placed, it’s clear the anger is being directed toward the cageside judges.

“The graphic that Bellator showed for the judging criteria was completely wrong,” Hinds said. “When you’re not educating the public and using your opinion more than facts, you’re going to create a lot of dissension, outrage and complaints about things most people don’t have the facts on.”

It’s a night that everyone involved would rather forget. Luckily for Bellator, the Dynamite 2 card is fast approaching. Given the close nature of the fight, a rematch would seem to be inevitable, but it’ll be a tough sell for the promotion. Hopefully, the judges that are cageside at the rematch have an easier time than Mr. Hinds.