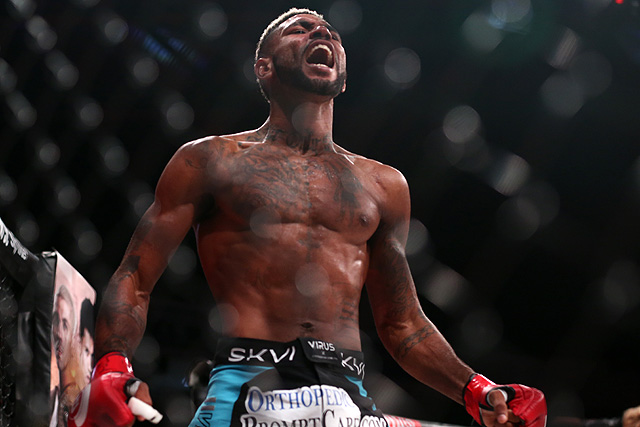 Earlier this year, Bellator MMA, along with the support of Viacom, continued its embarkment on a series of “power moves” to close the distance with its rival, the UFC, and to quiet those who refer to the company as “the other guys.”

These moves began with the pursuit of free agents. Last year, it with Phil Davis. More recently, it has been Benson Henderson and Matt Mitrione.

Henderson, a former UFC lightweight champion and decorated fighter in two divisions, was a big initial step for Bellator head Scott Coker and his regime. Henderson decided to test free agency, an occurrence that is becoming more frequent as fighters attempt to find out their true worth. It’s also an occurrence that was previously unheard of in MMA. A UFC fighter had, up to this point, almost always re-signed with the promotion. It was a safe move in an industry where cash isn’t exactly flowing into a fighter’s pocket.

Henderson is 32 years old, though, and we are in wait-and-see mode to determine if the MMA Lab fighter is still in his prime. In his promotional debut, Henderson suffered a loss to Andrey Koreshkov. Henderson’s setback was devastating for Bellator. The prized free agent lost his first Bellator fight and brought in subpar viewership. It was not exactly the scenario Coker and company had in mind.

Will Henderson bounce back? It’s safe to presume that he will. But how long will he be a top competitor? That’s anyone’s guess. Factor in the growing lightweight and welterweight divisions and the young, hungry prospects, and the probability of Henderson achieving the championship isn’t so certain.

Many people underestimated the talent Bellator has on its roster already. Many people expected Henderson to waltz in and win gold. Not so fast.

Mitrione was the second well-known UFC athlete to make his way to Bellator this year. Mitrione, like Henderson, had fought out his contract and saw greener pastures on Spike TV. He was a fringe top-15 heavyweight in the UFC, so it’s reasonable to think he would bring more viewership to Bellator’s shows. But again, that’s what we expected with Henderson, but it didn’t happen.

Mitrione is also in a more precarious situation than Henderson. He’s in a volatile division where one punch can send him face-planted on the canvas. If you’re expecting him to run through Carl Seumanutafa at Bellator Dynamite 2 on June 24 in St. Louis, then you’re overlooking a tough Samoan with a granite chin and freakish power. What’s also working against Mitrione is the style utilized by many of Bellator’s heavyweights. Tony Johnson. Bobby Lashley. Justin Wren. These guys are grapplers. Will they be favored against Mitrione? No, but they are opponents that should not be dismissed. Their wrestling credentials make them a true threat to Mitrione.

Who could possibly be a better investment than two former UFC fighters that bring brand value with them? The answer is simple.

Both fighters have recently re-signed to long-term contracts with Bellator. They are young fighters and have showcased an ability to bring along not just excitement in their fights, but dominance at times. They are fighters under less pressure to go out and win in dominant fashion, as casual fans have ignorantly expected with Mitrione and Henderson.

Sanchez is on a three-fight winning streak. Each of his fights has brought a level of excitement. His fights against Henry Corrales and Daniel Pineda can be seen as arguably “Fight of the Night” for their respective shows. Sanchez is seemingly a fight or two from a title. There’s a real possibility that he captures the gold, too, once he gets a crack at it.

The same is true of Caldwell, who is the No.1 contender in the bantamweight division. In his fights with Bellator, he has not taken much significant damage, if any. This is not an exaggeration. Look at his past fights with Joe Warren, Shawn Bunch and Rafael Silva. He has managed to defeat the opposition in dominant fashion and not get hit. This ability to minimize the amount of damage taken can lead to a lengthy career. And Caldwell, at only 28 years old, has just entered his prime. If his fight against Warren is any indicator, Caldwell has the ability to play wrecking shop with the top talent at bantamweight and become the champion, maybe as soon as this year.

The best investment one can make is in homegrown options. Sanchez and Caldwell represent this type of investment for Bellator. These fighters were not plucked from the UFC. They came up through Bellator’s own ranks. They were re-signed at an expense, but we’re not talking well into the six figures with incentive upon incentive. Furthermore, they might just have a better shot at winning gold and drawing in the fans.