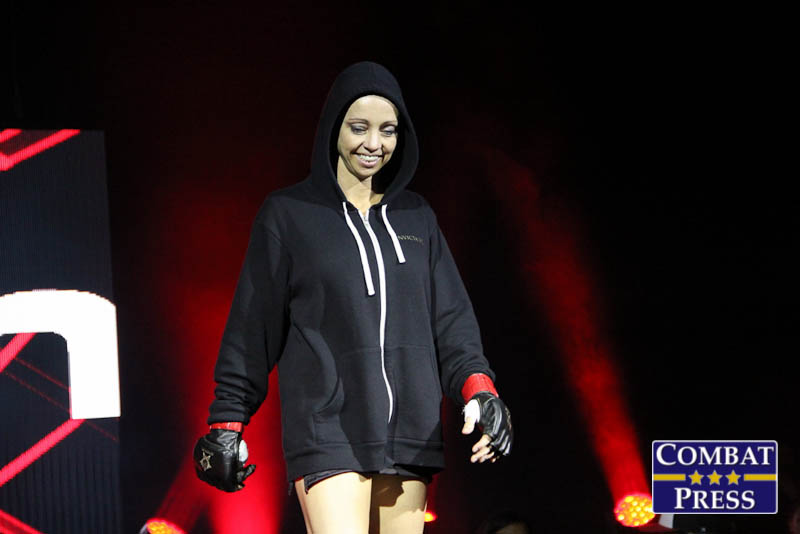 On the one hand, if you fail to plan, then you plan to fail. Yet, on the other hand, the best-laid plans… So what’s a person to do? Plan A, Plan B, et cetera? The Marines have a saying — “SNAFU” — and if you don’t know what it means, then please go thank a Marine for his or her service and then kindly ask them. Basically, you have to be ready for things to go south, because that’s the way of the world.

Shannon Sinn is no man, and she is definitely no mouse either. Yet she, too, has had plans go awry. Take, for instance, her decision to quit her full-time job toward the end of November. She did it so she could dedicate herself to being a full-time fighter. She took a leap of faith to be able to compete at the highest level.

“I dove right into training hard,” Sinn told Combat Press. “I knew I needed to put more time into training, but it was a big decision for me. I got the call from Invicta to fight on the card on Jan. 16 and almost immediately got hurt. It was so scary. Here I was, sitting around — it sucked.

“I had never been injured enough to pull out of a fight before, and here I was, full-time in fighting. But I feel like I am better off now for it. I did a lot of mental training and reading. I took the time to better myself and to look at other aspects of my life. My ribs and sternum were so sore. It was a very painful injury. I couldn’t get out of bed without gearing myself up for the ordeal. I was constantly afraid of coughing or sneezing.”

After competing in track and field at Idaho State, it was hard for Sinn to just go to the gym and lift weights and run a treadmill to stay in shape. Her then-husband went to a sambo gym and told her she would love it. She came for the cardio and stayed for the grappling. After helping the only other female that trained there at the time prepare for fights, Sinn decided to try her hand at it. As an amateur MMA fighter, she went 5-1.

Fellow Colorado fighter Maureen Riordon and Sinn also trained at the same gym for a while, but there was a falling out and Sinn decided to leave. After that, local promoters talked about setting up a grudge match, but it never came to fruition. That is, until they both made it to Invicta FC. On April 24, 2015, the 1-2 Sinn stood across the cage from the 0-1 Riordon. It was a fight with a lot of emotional buildup for both fighters.

The phrase “war of attrition” is what comes to mind when watching that fight. Neither fighter wanted to give up any ground to the other and therefore neither fighter was willing to take a risk.

“I was so glad to have that fight done and over with,” said Sinn, who was supposed to fight Riordon again, but the rematch was scrapped when Riordon hit the scales 7.8 pounds heavy. “Of course, I was prepared to fight her again at GLORY 24, so the weight issue really sucked. But for the fight at Invicta, well, there was a lot of added pressure.

“We disliked each other and couldn’t ignore it. I am not proud of that fight, even though I got the unanimous decision. I did enough to win and that’s about it. I didn’t perform the way I wanted to. And the thing is, I didn’t even want to dislike her.

“The downtime of my injury has had me thinking it’s time to let it go. I am a different person, and I am sure she is, too. I hope one day we can be cordial — I wouldn’t be opposed — and I don’t want to waste time hating someone for stupid reasons. We haven’t been face to face since GLORY. She was mad at the decision and I was mad at her… It’s just time to let it go.

“I’ve been following her, ummm… adventure with Chris [Trammel] when he was sick in Thailand. My heart went out to her. She was there taking care of him and being separated from her kids. It’s a wake-up call for everyone. There are a lot more valuable things than petty BS, and I am glad they are both home.”

“I am not sure how feasible it would be to plan for some downtime when out of training camp,” said Sinn. “I mean, if we don’t fight, we don’t get paid. I remember when Brandon Thatch had to pull out of a fight due to injuries. He said, ‘This happened for a reason. Now I get to dig in and fix other things.’ So that is how I look at it.

“If there were a way to schedule in breaks, it would be good to work on the mind and let the body rest. Fight camp isn’t really about learning anyway. You’re not learning new techniques in camp. I actually think that if you go from fight camp to fight camp, you can get stagnant as a fighter. You gain experience that can’t be gotten in the gym, but there is so much more than that in learning to be a better fighter.”

Sinn plans on becoming the best in her weight class. And to be the best, you’ve got to beat the best. Her next test comes in the form of hard-hitting Christine Stanley, a strong fighter with a record of 4-1. Stanley’s only loss comes from former The Ultimate Fighter contestant Justine Kish. “Knuckles” has secured all four of her wins via strikes.

“This is going to be an excellent fight,” said Sinn. “I am so excited to fight her. She has hands. I know what she has to offer. I am sure she is better now than what I’ve seen before, but so am I. I’ve been in the cage with tough girls. ‘KGB’ [Andrea Lee] is tough. Alice Yauger was a champion boxer and hit hard — she had hands of steel. So I am going to get in there and throw down with [Stanley], and if that doesn’t work, well, I’ve got more tools. Jiu-jitsu is always there for me, but I’ve just never used it in fights. I expect her to come in hard. It’s going to be a really good fight.”

You can have an idea in your head and work toward those goals. Originally, this feature on Sinn was going to talk about balance and how important it is for a fighter to find it out of the cage as well as in. But that didn’t go so well. Hopefully you agree that this is the right way to tell Sinn’s story. She didn’t plan on getting where she is by taking the route she did, and yet here she is, fighting for the world’s premier women’s organization. She was flexible and able to adjust her plans to make her goals happen. This flexibility is paramount to success in all facets of life. Sinn is showing that she can adjust, tweak and grow with the best of them.