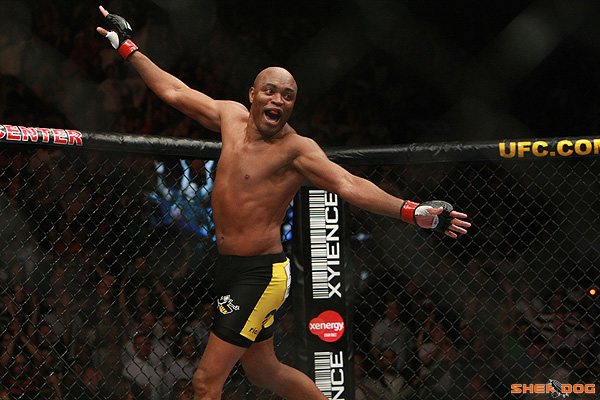 As if the list of guys calling out Conor McGregor wasn’t long enough, we can now add arguably the most dominant fighter of all time into the mix. During a recent media day promoting his UFC 198 fight with Uriah Hall in May, Anderson Silva decided to throw his name into the McGregor sweepstakes down the line, saying it would provide “a big challenge.”

Naturally the internet wasn’t going to let that type of quote go to waste. Within minutes, fans were coming out in droves, both in favor and in opposition of the bout. It’s not surprising that so many fans have an opinion on a potentially humongous fight, even though the odds of it actually taking place seem slim to none at this point. However, it’s worth noting that it’s likely that none of this speculation would even exist if it wasn’t for last month’s UFC 196 card.

Despite the MMA gods doing virtually everything in their power to shut the event down, UFC 196 ended up being one of the most memorable cards in UFC history. Originally set to go down in February with a heavyweight title fight as the headliner, the event was postponed a month when both champion Fabricio Werdum and challenger Cain Velasquez were forced to pull out with injuries. The champion vs. champion fight between Rafael dos Anjos and Conor McGregor scheduled for the next month had its name switched from UFC 197 to 196, but when dos Anjos was injured less than two weeks out, the card ran into trouble again.

The UFC was put in a tough spot for the second time in as many months. In order to make things work, the company was forced to think outside of the box. After exploring some options for McGregor, the promotion settled on a match-up against Nate Diaz in the welterweight division, a full weight class higher than where Diaz usually competes and a good 25 pounds above McGregor’s usual fighting weight. Booking this fight was uncharacteristic of the UFC for several reasons, namely that it’s become exceedingly rare to see a UFC champion compete in a non-title bout. Having that champion compete two weight classes above normal and against a top-10 opponent on short notice? That was pretty much unheard of.

Yet, even with barely a week to promote the bout, McGregor vs. Diaz quickly became one of the most anticipated fights in recent memory and ended up producing one of the best pay-per-view buy rates that the UFC has seen over the last few years. It turns out that when the fighters are McGregor and Diaz, the fans didn’t care about the belt or the size difference. They just wanted to see two of the most popular fighters on the roster come to blows. That worked out great for the UFC this time around, but it’s also bound to have gotten the attention of Silva and some other big-name fighters looking for a payday.

The list of guys calling out McGregor has been a mile long for a while now, but after proving he’s willing to fight at whatever weight it takes if it means a good payday, the number of potential superfights for McGregor has only grown. While guys in other weight classes — Anthony Pettis, B.J. Penn and Donald Cerrone, to name a few — had been tied to McGregor over the course of the last year, McGregor taking his last fight at 170 pounds opened the door for Silva and even a few other challengers that weren’t really on the radar. Names like Georges St-Pierre and Nick Diaz that floated around in the past with little substance suddenly seem more plausible. Even someone like Silva in a fight closer to 185 pounds doesn’t seem farfetched anymore.

Under normal circumstances, a fighter as popular and as willing to fight anyone as McGregor is would be a best-case scenario for the UFC. The company would be able to book McGregor against guys like Nick Diaz, Silva and St-Pierre in rapid succession. It seems like a promoter’s dream. But as long as the “Notorious” one is holding onto his featherweight title, McGregor getting called out by guys in five different weight classes is going to become more of a headache than it’s worth, and it will almost certainly end up putting a stranglehold on the 145-pound title scene. Instead of defending his featherweight strap this summer, McGregor will rematch Nate Diaz at UFC 200, leaving Frankie Edgar and José Aldo left to fight over an interim belt that shouldn’t exist in the first place.

The McGregor situation is quickly becoming a case of relevant fights vs. money fights, and while the UFC just had some serious success with the latter, the promotion and its fighters would be wise to remember that they’ve built their success on the former. Throwing the casual fans a bone and providing a big-money fight regardless of the rankings every once in a while is both smart and necessary. But when it comes down to it, those aren’t the fans that spend hours upon hours watching fights each month and ordering every event without hesitation. Giving McGregor superfights will make some money, but it will also end up making an entire division irrelevant. That’s a huge insult to both the fans that put the time in to watch every card and the fighters who are essentially fighting for second place in the division.

When McGregor took the fight against Nate Diaz at welterweight to save UFC 196, it was the right thing to do. But McGregor can’t make this a trend and still expect to be a champion. If the Irishman wants to vacate his belt and start fighting in a bunch of different weight classes for a paycheck, that’s his prerogative. However, he shouldn’t be allowed to hold his division hostage while taking superfights, and the UFC shouldn’t allow him to take more than one fight in between title bouts, if any at all. McGregor’s the biggest thing going in MMA and has earned the right to be called a champion, but part of being a champion is actually defending the championship. If McGregor isn’t going to do that, what’s the point of him wearing the belt at all?