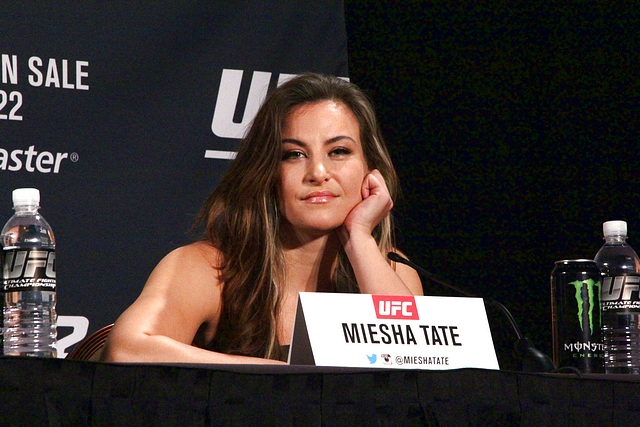 A certain little somebody returned to say, HELLO!

Host Jason Kelly (@JayKellyMMA) was joined by Amy Barton (@amesbelle) to give a casual fan’s point of view on UFC 196 and what lies ahead for the UFC, on this episode of Rear-Naked Choke Radio.

Barton played a key role at MMADieHards.com in it’s heyday, handling social media and hosting Punch Drunk Radio and MMA Beatdown. While her involvement in mixed martial arts may not be what it once was, she still keeps on eye on the fighters and events that rock headlines.

Barton and Kelly talked Nate Diaz’s victory over Conor McGregor at UFC 196 and where each fighter’s road ahead will take them, along with newly crowned women’s bantamweight champion Miesha Tate and her first title defense against Ronda Rousey. Aside from the main event and co-main event competitors from UFC 196, Barton also spoke on the combatants she cared for from the event, such as Jim Miller.

There’s never any shortage on predictions about who fights who next, how hypothetical match ups will play out, or what the UFC will do next. So, Barton and Kelly gave theirs, for whatever it’s worth.

With UFC 200 coming up in July, potential fights on the card were discussed. The current and former podcast hosts also played UFC matchmaker and talked about the future foes for UFC 196’s winners and losers, as well as other fighters they want to see in the cage as soon as possible.

Barton getting back into podcasting in the MMA realm is something Kelly and her former listeners would love to hear, so she wasn’t getting off the hook without talking about her future plans. She did not fully commit, but did mention what might be in store for her, and her co-hosts Alex Donno and Mike Fester.