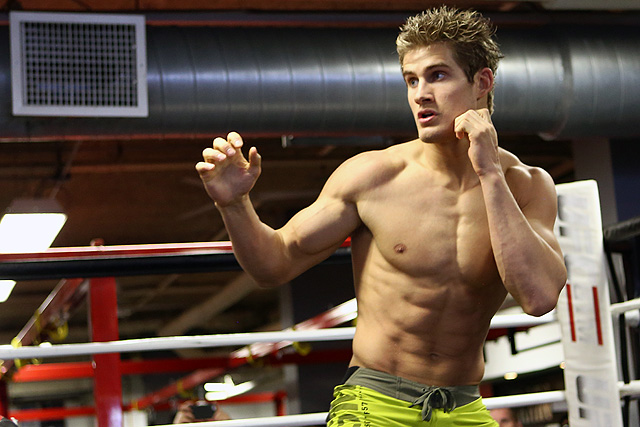 Super No More: Is the Hatred of Sage Northcutt Warranted?

Spoiler alert: Sage Northcutt is going to be OK. Like, really OK. According to the pillar of internet research, Wikipedia, the kid is a petroleum-engineering major at Texas A&M. So even if this whole fighting thing doesn’t work out — and for the record, it’s working out, given that he’s the highest-paid 19-year-old in the history of the sport — he’s got a backup plan. Oh, and nevermind the fact that he looks like a model.

So, this isn’t really about “Super Sage,” is it? It’s about you. What are you really mad about? Let’s figure that out, and see how we can move forward and appreciate Northcutt for what he is, and not what you want to make him.

So, what are the criticisms about this kid?

He’s cocky. I’ve always had a problem with this one. There is a guy you work with at a call center who’s cocky. He’s the guy you should hate. He’s the guy who hasn’t really done anything that warrants his cocky demeanor. Northcutt, meanwhile, is 19 years old and makes 40 grand to show and 40 to win. He’s 2-1 in the UFC. He was handpicked by UFC President Dana White to be the first featured fighter on White’s new show, Lookin’ for a Fight. He’s in great shape. He’s good looking. He has money and fame. So, tell me why he shouldn’t be a little cocky. Also, the stuff Northcutt does at open workouts and after fights are the things you do in other martial arts, so you don’t really know if he’s paying homage to this part of his training or just showing off.

He doesn’t deserve the money. This is a classic hater line aimed at someone who does something the hater can’t do. Quick business lesson, fellas. Your worth is determined by what someone is willing to pay. The market determines your worth. Zuffa looked at everything Northcutt brought to the table and said this is the number we have to give this guy to ensure he doesn’t sign with anyone else. It’s as simple as that. Not a penny more. Zuffa is not in the business of doing favors, and it didn’t give Northcutt the money because it liked him. It’s a simple equation for the UFC: We give him this money, he signs with us and we make more money off of him. It’s the same thing the UFC did with Conor McGregor, Ronda Rousey, Jon Jones and every other star fighter.

He’s too nice/corny. Guys, if this is something you hate, we are in trouble as a society. I know we live in a society now where it’s cool to like the anti-hero. We want our heroes flawed and giving the middle finger to society. I’m sure you like Nick Diaz and think he would like you. Guess what? He probably wouldn’t. Northcutt is a nice, polite kid. This is a good thing. He is someone you would want your kid to be. He’s someone you would want your daughter to date. He’s the UFC’s version of Tim Tebow. He may be corny, but he’s a young guy from a small town and all this is a lot to take in. He seems authentic, though, and that’s more than you can say for a lot of fighters out there.

“The Tap.” Or, in other words, he’s soft. First, let’s start by talking about anyone who puts themselves in a cage for a living against God knows who, prepared to do God knows what. This person is not soft. The reality of Northcutt’s fight against Bryan Barberena was that Northcutt was sick. He had strep. If you don’t think that will affect the way someone will fight, then you’ve never had strep. I understand the “outrage” over how poor the submission was, but, again, you don’t know what he felt. This is not to take anything away from Barberena, but the fight has to be taken with a grain of salt.

The true explanation for a lot of the sentiment toward Northcutt is the love/hate relationship fans have with the UFC and Dana White. Fans have issue with some of the things White and, more specifically, the UFC does. They don’t like the Reebok deal. They don’t like the saturated calendar of events. They want to be heard, but the UFC just continues to do its own thing. However, what the fans can do, is blast the “chosen ones.” The fighters the UFC has reached down from the heavens and given its blessing and full support to. Those fighters who have been anointed as the next big thing. The fans can hate them. In doing so, they enact some sort of revenge on the UFC by proxy. They don’t have the guts to hate Dana, so they hate what he loves. The fans want White to love them and continue his relationship with them, so they project their anger elsewhere.

I understand the logic, but in the future let’s leave kids like Northcutt alone. He’s a good kid who represents what’s good about this sport. He should be a role model to your kids. He shouldn’t be the subject of your ire.