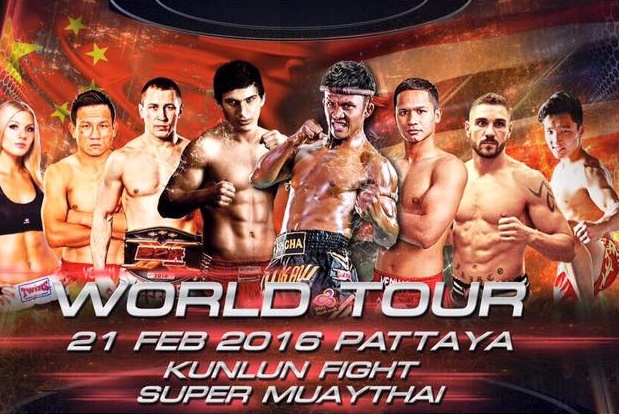 Buakaw will take on three men in one fight. That’s not a typo, and this is not the first time the promotion has done this type of fight — and it is not the first time this type of exhibition has happened in Thailand, or the world for that matter. The exhibition is presumably meant to give Buakaw time to develop his MMA skill set, as it was announced, after his last win at Kunlun Fight 36, that he will fight against Yi Long in a rematch, this time under MMA rules, at the end of 2016. Buakaw has been training jiu-jitsu and working on his wrestling in the cage his gym recently purchased in the past few months.

Entertainment and future excitement aside, the rest of the fight card is a mix of former champions, top contenders and young talent looking to break out. The lineup features two four-man, one-night tournaments that will kick off the extensive 2016 70-kilogram tournament, dubbed the “Clash of Titans.”

Zuev couldn’t repeat his success from the previous year in 2015. He was given a break in the 2014 tournament when he replaced the injured Mustapha Haida, who had defeated him in the previous round. Zuev knocked out Thai fighter Aikpracha Meenayothin in the second round of their semifinal bout. Zuev met Victor Zagbe in the finals in a fight he won on points to become the champion. Zuev garnered much attention from the Chinese fans after the tournament win, skyrocketing his status so early into his career. His road to the tournament crown in 2015 wasn’t easy; one could even say it was quite difficult. He faced Yodsanklai Fairtex, one of the best 70-kilogram fighters in the world, in a superfight where he was outclassed by the superior technician. Zuev lost against Yodsanklai, but he was already given an invite into the final 16 of the 64-man 2015 70-Kilogram World MAX tournament due to his title win the year before. Zuev fought Nagbe in a rematch of the 2014 final in his quarterfinal match-up, and Nagbe got his revenge after an extension round.

Risco had mixed results throughout the year, winning big fights against two-time K-1 MAX champion Andy Souwer and William Diender while losing to Combat Press “Fighter of the Year” Sittichai Sitsongpeenong and Anatoly Moiseev. Risco lost in the quarterfinals of the 70-kilogram tournament to Sittichai at Kunlun Fight 31, but he started another winning streak shortly after, defeating European circuit veteran Diender and Swiss kickboxer Christophe Pruvost. Risco’s streak was ended last month when he lost a decision to the undefeated Moiseev at Kunlun Fight 37 in Sanya, China.

Benzad is a 12-time Iranian kickboxing national champion making a drop to 70 kilograms to compete in the 2016 Clash of Titans tournament. Benzad, 23, has racked up 55 wins in 65 career fights. He last appeared in the promotion opposite Chinese kickboxer Nuerla Mulali in the semifinals of the four-man 75-kilogram tournament held at Kunlun Fight 34 in November. Benzad lost the fight to the eventual tournament winner, giving way for an opportunity for redemption in his move down in weight and entry into the tournament. Benzad will face 20-year-old Chinese kickboxer Lei.

Lei has earned 12 victories in 20 career bouts. He recently fought another Iranian kickboxer when he entered the 2015 Topking World Series 16-man tournament as a replacement fighter for Jimmy Vienot. Lei defeated Saeid Chahardouli by decision at Topking World Series TK 7, moving on to the final four in December. Lei was matched with Russian fighter Khayal Dzhaniev in one of the semifinal bouts, but the fight would not end in his favor. Lei was bullied by the much stronger fighter and was dropped early into the fight with a right hand. Dzhaniev put an end to the fight with a big right hand while Lei was looking to get out of danger. The winner of this fight might come out hungry heading into the tournament final, in which they will surely be the underdog.

Russia meets Japan when the 22-year-old Dzhaniev takes on Miyakoshi in one of the semifinal matches. Dzhaniev is probably most known for his big win over Buakaw at the Topking World Series TK 4 last year. The bloody brawl went back and forth until the bitter end. Dzhaniev shocked many fans around the world when his hand was raised against the heavily favored Buakaw. Dzhaniev defeated Eddie Paci and the aforementioned Lei on his way to the Topking World Series 16-man tournament final opposite Dmitry Varets.

The 26-year-old Japanese Muay Thai fighter Miyakoshi spent much of the past five years fighting in Thailand and Japan, two countries known for their storied Muay Thai tradition. This fight should end in exciting fashion, as both men like to get to work early.

Pongthong is a Thai fighter who has spent the past few years fighting his way through the Khmer boxing ranks in Cambodia. Pongthong, 28, fought many of the top Khmer boxers in the world, including Roeung Sophon, Pich Seyha and Keo Rumchong. He had mixed results in his venture, but he showed his toughness, grit and will to win on many occasions. Pongthong returns to Thailand to welcome Chinese kickboxer Zhuangwei.

The 20-year-old Zhuangwei has just begun his kickboxing career on the backing of an extensive Wushu and Sanda background. Zhuangwei finished in the top three in international Wushu competition in 2011 and won multiple regional titles in Sanda and kickboxing in the following years. The man coming out of this match-up may be battered and beaten when they make their way to the final.

The tournament reserve bout features Denmark’s Mohammed El-Mir taking on Russia’s Vladimir Shuliak. El-Mir won the World Muay Thai Council and WKN European titles before entering the GLORY ring against K-1 Max champion Albert Kraus at the first event in Stockholm in 2012. El-Mir lost the bout, but he has since improved his record to 112 victories with just 21 defeats fighting in Europe and Asia. El-Mir is coming off a win over UK fighter Mark Skeer at the Chaweng Boxing stadium just three weeks ago.

“Hummer” Shuliak has fought all over Thailand over the past few years, running his record up to 60 wins and nine defeats. He last appeared in Kunlun in a win against Chinese fighter Zhao Yan in September. Shuliak has found much success in Thailand under full Muay Thai rules, and his transition to kickboxing rules should be an interesting storyline to watch.

The fight card will also feature three MMA fights. A fourth MMA bout was scheduled for the card, but ONE Championship fighter Alateng Burigede had to pull out of his scheduled contest with budding multiple combat-sport prospect Rafael Fiziev. AKA Thailand fighter Salim Mukhidinov, 22, takes on 25-year-old Russian kickboxer Evgeniy “Bad Boy” Ryazanov. Mukhidinov has won four straight since dropping his professional debut at Full Metal Dojo 6 just six months ago. Ryazanov won his last two fights to finish off 2015 with four wins and just one defeat.

Exciting Ukrainian fighter Svetlana Gotsyk has won two straight fights, finishing both of her opponents with strikes less than 60 seconds into the first round. Gotsyk lost to Bellator flyweight Lena Ovchynnikova in her second bout of the 2014 IMMAF event in Ukraine. She will take on 24-year-old Zhang Weili, a veteran of the long-running Chinese MMA promotion CKF. Weili began training Sanda at the age of 12. She continued her training to fulfill her warrior spirit, taking up Brazilian Jiu-Jitsu in 2012 and switching her focus to MMA shortly thereafter. Weili has eight career wins to only three defeats.

Chinese fighter Alateng Heili has put in his rounds in some of the top promotions in Asia, recently taking a step up in competition in both ONE Championship and Road Fighting Championships. Heili, 24, earned big wins over ONE veterans Jessie Rafaols and Stephen Langdown in 2015. Heili won three of his past four bouts, dropping a decision to former Road FC flyweight champion Nam Jin Jo in his only loss. Heili takes on Hawaiian fighter Kana “The One Man Riot” Hyatt. Hyatt had ups and downs in his almost 11-year MMA career. He fought his way through the King of the Cage ranks before moving on to fight on the regional scene in California. Hyatt would have somewhat of a late career resurgence, winning the Pandemonium flyweight title when he became the first man to defeat UFC fighter Cub Swanson’s brother, Seth Swanson. Hyatt defended his belt once before entering the Vale Tudo Japan 57-kilogram eight-man tournament. Hyatt won his first-round match in a slugfest with Freddy Arteaga before losing in the semifinals to eventual tournament winner Hiromasa Ogikubo. Hyatt has won just one fight in his past four, losing to top Japanese fighters Yusaku Nakamura and Ryota Matsune.

Kunlun Fight 38 can be watched live on Workpointe TV at 7 a.m. ET on Sunday.