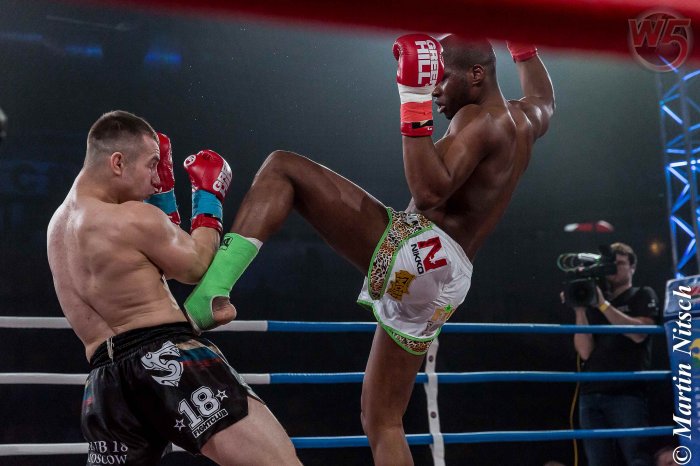 In a year with so many spectacular knockouts in the world of kickboxing, one punch or one kick could earn the top spot for 2015. The best finish of the year didn’t happen in one of the world’s major promotions, but during a 71-kilogram tournament in the Russian promotion W5 Grand Prix.

Chris Ngimbi moved to the Netherlands when he was 11 years old, fleeing Congo, his country of origin, due to civil war. The move opened the door for Ngimbi to play soccer and eventually try kickboxing. Ngimbi fought in both Europe and North America during his ascension to the top level of the kickboxing world. He defeated top fighters Chahid Oulad El Hadj, Marco Piqué and Warren Stevelmans on his way toward earning a spot in the K-1 MAX tournament, the most prestigious lightweight tournament in the world at the time. Ngimbi won the It’s Showtime 70-kilogram title when he took a unanimous decision over Murat Direkçi. Ngimbi lost close decisions to Robin van Roosmalen and Grégory Choplin before finally qualifying for the K-1 MAX World Grand Prix with a win over Longern Superpro Samui. Qualifying is as far as Ngimbi would get, as he lost in the quarterfinals to eventual tournament runner-up Artur Kyshenko. Ngimbi had mixed results over the next few years, losing to Jiao Fukai in the 2014 Kunlun Fight 70-kilogram tournament and budding prospect Enriko Gogokhia in April 2015.

Ngimbi entered the W5 16-man, 71-kilogram grand prix as one of the tournament’s favorites, just months after losing back-to-back fights. He was joined by other talented fighters like Cosmo Alexandre and Artem Pashporin in the tournament field. Ngimbi won his opening bout with an early knockdown and injury to his opponent, Valentin Ribalko. Ngimbi capitalized on a mistake that injured Ribalko and he made his opponent pay by kicking his injured right arm over and over again until Ribalko could no longer continue.

Ngimbi faced 24-year-old Russian Ilia Usachev in his next tournament bout on that same night. Ngimbi and Usachev were cautious in the first round, feeling out the range and patiently looking for the strike that could advance them in the tournament. Usachev picked up the aggression, countering Ngimbi’s strikes and landing his own left hooks to the body. Ngimbi noticed the pattern of Usachev dipping his head to the left to throw his right hand counter. This is where the end began. Ngimbi read the right hand counter off of his own left hand feint. Usachev threw his right hand and dipped his head off the center line and to the left, just as Ngimbi expected. Ngimbi put his left arm in the way of his opponent’s right hand and briefly grabbed the back of the head of his Russian foe. Ngimbi simultaneously pulled down his opponent’s head while shooting his right knee just under the chin of Usachev. The high knee strike was perfectly placed, right on the button. Usachev crashed stiff into the ropes, unable to answer the count and continue the fight. The win was the African Warriors’s 46th career victory and the Combat Press 2015 “Knockout of the Year.”

In addition to watching the brutal finish above, it would be well worth your time to search for footage of the other finalists below. It was a great year for kickboxing and finishes.