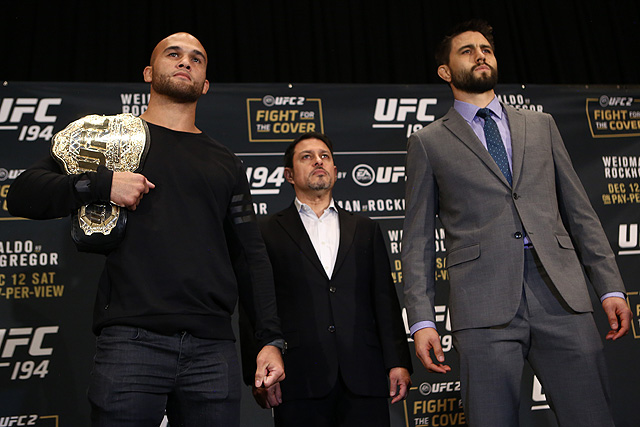 On Saturday, Jan. 2, the UFC hosted UFC 195: Lawler vs. Condit from the MGM Grand Garden Arena in Las Vegas.

In the night’s main event, UFC welterweight champion Robbie Lawler put his belt on the line against former interim champion Carlos Condit. Lawler retained his title in July with a stunning, fifth-round finish of Canadian Rory MacDonald at UFC 189. It marked Lawler’s fourth straight win and first title defense. Condit, meanwhile, returned from a lengthy injury absence in May to stop former title challenger Thiago Alves at UFC Fight Night 67. The New Mexico-based fighter looked to earn back-to-back wins for the first time since losing his interim title in late 2012.

The co-main event of the evening also featured a former champion as heavyweight Andrei Arlovski took on hard-charging Stipe Miocic. The bout may have decided the next title challenger.

The night’s main event was everything that fans expected as Robbie Lawler and Carlos Condit went to war for five rounds. Lawler pushed the action early, backing Condit against the cage. Condit fired off a variety of kicks to establish his range and swing control in his favor. He dropped an off-balance Lawler midway through the round and began scoring with combos. Round two saw Condit land with combo after combo, but Lawler responded with a gorgeous right hook counter that sent Condit crashing to the canvas. He couldn’t finish, but clearly claimed the round. The third frame was the swing point of the fight as Condit continued to land with volume, but Lawler landed heavy counter shots. Condit took over in round four, battering the champion with punch after punch and controlling the range with his kicks. Lawler went for broke in the final stanza and the pair produced one of the most thrilling rounds in recent memory. Lawler connected with vicious shots along the cage, clearly rocking Condit. Despite the onslaught, Condit never went down and fired back. The wild battle went to the scorecards where two of the judges gave the nod to Lawler, who retained his welterweight title.

Heavyweight Stipe Miocic needed less than a minute to dispatch of former champion Andrei Arlovski with punches. Miocic landed a right hand behind the ear of Arlovski that rocked him. Miocic smelled blood and flurried with more punches. Another right-left combo sent Arlovski crashing to the canvas. Referee Herb Dean pulled Miocic off Arlovski just 54 seconds into the contest.

Highly touted strikers Albert Tumenov and Lorenz Larkin put on a technical clinic in their three-round war. Tumenov’s boxing prowess was on display early as he countered ever kick from Larkin with a straight right hand. He then switched his attack to Larkin’s body, peppering the liver with hooks. The Muay Thai stylist Larkin delivered a steady diet of kicks to the lead leg of Tumenov and as the fight progressed, they took their toll. Tumenov was limping badly and switching stances in the final round, but Larkin could not find a finish. Tumenov’s early work was enough to convince two of the three judges to give him the win on the scorecards.

For two rounds, it appeared as if TUF winner Diego Brandao would take victory from Brian Ortega, but Ortega’s Brazilian Jiu-Jitsu turned the tide in round three. Brandao attacked with heavy strikes on the feet in the opening round. His aggression overcame the length of Ortega. When the fight did hit the mat, Brandao was quick to stand up and avoid Ortega’s dangerous guard. Down two rounds, Ortega went on the offensive in round three. He attacked the neck of Brandao with an anaconda, but then moved to a mounted guillotine. Brandao defended, so Ortega allowed Brandao into his guard and secured a triangle choke that forced Brandao to tap.

Lightweight Abel Trujillo snapped a two-fight skid with a first-round guillotine choke finish of Tony Sims. Sims peppered Trujillo with right hands early and often, prompting Trujillo to look for a takedown. Sims stayed upright, but shot for a takedown of his own. He left his neck exposed and Trujillo locked onto the fight-finishing submission.

After more than two years away from the Octagon, former title challenger Michael McDonald survived a tough opening round to submit Japanese veteran Masanori Kanehara via rear-naked choke. Kanehara took McDonald down early and staved off a guillotine choke. Kanehara controlled the first round from the top. The second round started the same way and Kanehara moved to mount. The Japanese fighter looked for an arm-triangle, but McDonald powered free and took Kanehara’s back. He locked in a deep rear-naked choke and coerced the tap from Kanehara.

Despite fighting on short notice, newcomer Alex Morono claimed a split decision over veteran Kyle Noke. The pair traded strikes in the first round with Noke landing leg kicks at will. A right hand from Morono cause blood to pour from Noke’s nose. Round two saw Noke’s nose bleed badly, but he controlled the action. He briefly took Morono’s back after mounting him. Morono escaped with heel hook attempt, but spent a good portion of the round on his back. The final stanza swung in Morono’s favor as he outworked Noke and nearly finished the fight with an armbar. Two of the judges rewarded Morono for his efforts.

Returning from a lengthy injury layoff, strawweight Justine Kish got a questionable decision win over Nina Ansaroff. Kish was extremely aggressive to start the fight, barreling forward wildly. That allowed Ansaroff to pepper her with counter punches. It was more of the same in round two, but Kish earned a head-and-arm throw with a minute left in the round. Both fighters slowed in round three, but Kish earned a late takedown, moved to mount and then took Ansaroff’s back. Ansaroff scrambled to the top position, but it wasn’t enough as the judges inexplicably gave the decision to Kish.

Kicking off the televised portion of the prelims, Drew Dober took a decision win over fellow lightweight Scott Holtzman. Despite Dober’s striking accolades, he used well-timed takedowns to repeatedly put Holtzman on his back in the opening round. Holtzman swung the momentum back in his favor in the middle stanza, getting the better of the wrestling exchanges. In round three, Dober opened up with his striking and opened up a nasty cut on Holtzman. The bloody, back-and-forth affair ended with Dober’s name being read as the winner.

In a fight that lived up to its billing, lightweights Dustin Poirier and Joseph Duffy put on a show. The pair battered each other with punches early. Duffy scored with angles, but Poirier was able to get inside and land uppercuts. A takedown from Poirier swung the round in his favor and he delivered a huge elbow. Poirier’s nose bled badly in round two, but he took the fight to the ground once again and battered his Irish foe from the top. Duffy’s left was completely swollen shut in round three as he found himself on his back yet again. A late triangle attempt from Duffy was not enough, as Poirier claimed the lopsided decision win.

Japan’s Michinori Tanaka edged former title challenger Joe Soto via split decision after three rounds of back-and-forth action. Tanaka scored with a takedown early, but Soto threatened with a gogoplata from his back. Tanaka escaped and scored with strikes. Round two was similar, but Soto opted for a guillotine attempt, which Tanaka also escaped. Soto’s active guard took its toll on Tanaka in the third, as Soto clearly took the round. It wasn’t however, as two of the three judges rewarded Tanaka on the scorecards.

Welterweight Sheldon Westcott secured the first UFC win of 2016, stopping Edgar Garcia by TKO in the first round. Garcia scored with a right hand, but Westcott changed levels and took the fight to the mat. He quickly moved to Garcia’s back and began delivering a steady stream of punches. After dozens of unanswered strikes, the referee stepped in to halt the action.