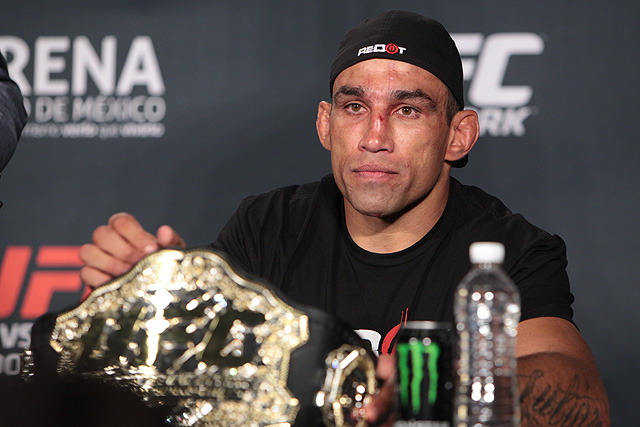 The UFC Must Get a Handle on the Heavyweight Division

How does the old saying go? The bigger they are, the harder they fall?

I love a good cliché as much as the next bloke, and that one in particular can certainly apply to the current state of the UFC’s heavyweight division. A single day went by after Cain Velasquez announced he had to pull out of his heavyweight title fight against Fabricio Werdum at UFC 196 next month due to injury. A single day went by before Werdum, himself, said he was also pulling out of the fight to address nagging injuries of his own.

Who was cheated the most from this double whammy, besides the UFC itself? Presumed No. 1 contender Stipe Miocic, that’s who.

Miocic was originally named as Velasquez’s replacement. However, because Werdum withdrew from the bout as well, Miocic suddenly finds himself without a fight. With the UFC not able to salvage a heavyweight main event, it announced it was moving UFC 196 itself to Fox Sports 1 instead of keeping it on pay-per-view. Which is a great move for the company — and a major boon to cash-strapped fans — but it’s still a bad move for the fight-less Miocic.

With Velasquez and Werdum out for an undetermined amount of time, the question remains centered on who will fight for the heavyweight title. Will an interim title be created again? If so, one must assume that Miocic would fill one of the slots in a hypothetical bout. Who would he face?

A possibility that was bandied about to replace the scrapped Werdum/Velasquez bout was to have Miocic fight either Josh Barnett or Ben Rothwell. The two are currently scheduled to fight at UFC’s next Fox card on Jan. 30. However, both fighters expressed a willingness to step in at UFC 196. It’s amazing what the promise of a title shot will do, isn’t it?

However, the UFC decided to keep Barnett and Rothwell on Saturday’s Fox card. So, should the victor be on the short list of title challengers? Yes.

Rothwell is riding a three-fight winning streak, with first-round finishes in his last two outings. Barnett is 2-1 since rejoining the UFC in 2013 and is coming off a dominant unanimous decision victory over Roy Nelson last year. Barnett’s popularity from his time in Pride and Strikeforce has also carried over into his second stint with the UFC.

The only other fighter who could lay claim to a heavyweight title shot is Alistair Overeem. However, after his second-round TKO victory over Junior dos Santos late last year, Overeem exercised his right to become a free agent and is seemingly going to shop his services a little longer. If the UFC didn’t dangle the promise of a title shot to Overeem in hopes of getting him to re-sign quickly, one has to wonder why.

Velasquez’s injury history is well documented, so who knows if the rematch no one really asked for with Werdum will actually happen. Miocic proved his worth as a No. 1 contender with his first-round knockout of Andrei Arlovski earlier this month, ending Arlovski’s six-fight winning streak. But as we’ve seen, the UFC seemingly hands out title shots like party favors to the first person who asks. Just because Miocic looks like the No. 1 contender now doesn’t mean he will be a week from now, a month from now, and so on.

If Rothwell and Barnett tear the house down on Saturday’s Fox card, or if one of them achieves a devastating finish over the other, then to the victor might go the spoils. Which means Miocic, who’s been on the unlucky end of canceled fights and similar circumstances before, might find himself on the outside looking in once again.

So, to take a line from the great Eminem: Will a real UFC heavyweight title contender please stand up?