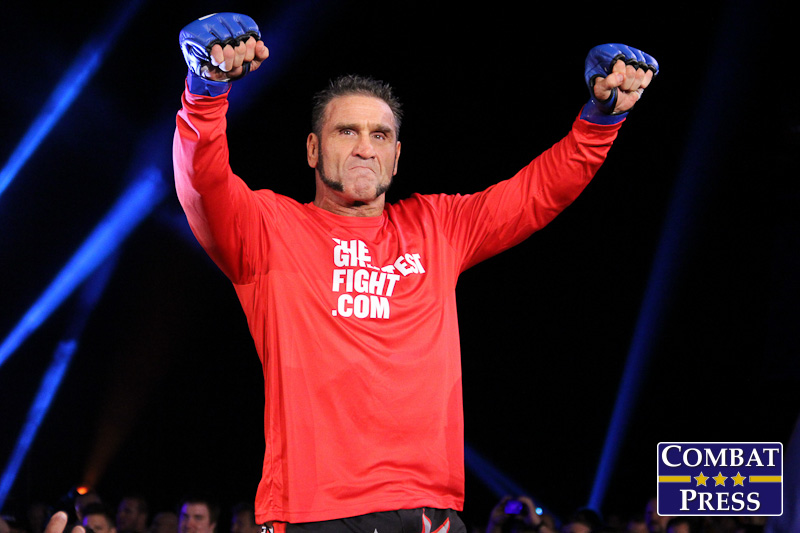 Is the UFC Being Swayed By Bellator MMA’s Actions?

Is the UFC’s decision to allow Conor McGregor to have the chance to hold two simultaneous belts just a timing opportunity or is it a subtle retaliation toward Bellator’s “freak-show” fights?

When Bellator MMA’s reins were handed to new company head Scott Coker, fans and pundits wondered what direction the organization would go. A year and a half later, these questions have been answered. Bellator has come under criticism lately for its “freak-show” fights. There was last year’s clash between Kimbo Slice and Ken Shamrock. This year’s list of upcoming Bellator fights includes a scrap between ancient veterans Shamrock and Royce Gracie. There’s also Kimbo Slice again, now set to meet Dada 5000, who carries a damn sledgehammer in the fight posters. Coker is well aware that these are fights that hold no real relevance in the division, but simply exist to draw in fans. And guess what? It’s working.

When Slice fought Shamrock, they received top billing over Patricio “Pitbull” Freire, the reigning featherweight champion of the time, and his title defense against Daniel Weichel. More people watched Pitbull fight than had ever watched before, and it was all because of the main event. Backlash or not, Coker is taking Bellator in a strange, but prosperous direction.

So, what is the UFC going to do to counter this? Take it up one notch, of course.

At UFC 194, the aforementioned McGregor was finally able to silence a lot of doubters — most of the world, really, sans the Irish crowd — when he dethroned nearly unbeatable former UFC featherweight champion José Aldo in just 13 seconds to capture the title. McGregor’s meteoric rise had finally turned into a dream come true. But McGregor wasn’t done. He won a title, but he wanted another, this time in the lightweight division.

When the UFC came to Orlando, just a week after McGregor claimed the title, many fans were clamoring for a showdown between Donald “Cowboy” Cerrone and McGregor to really settle the animosity that had been brewing for months. Insert UFC lightweight champ Rafael dos Anjos, who was able to not only defend his belt against Cerrone, but do so in devastating fashion by crumbling the Cowboy in just over a minute. Many fans thought surely the UFC wouldn’t want to match up McGregor and dos Anjos. Just a few weeks later, though, they got their answer.

UFC 197 was officially announced this week, and it will feature a “champion vs. champion” bout between dos Anjos and McGregor. The real question will come when the dust has settled on the night of March 5. Surely the UFC will not let McGregor hold two belts simultaneously, right? The company would have him vacate the featherweight crown if he were victorious, right? Wrong.

I feel that the UFC By allowing McGregor to have the chance to hold both belts now, the UFC is clearly taking a direct shot at Bellator’s obscure match-ups. It’ the UFC’s way of saying it can do one better. It’s not a foreign concept to McGregor, either. He previously held both the featherweight and lightweight titles under the Cage Warriors banner prior to signing with the UFC. In the modern age, only one person has held two titles simultaneously at the very highest levels of the sport, and that’s World Series of Fighting middleweight and light heavyweight champion David Branch.

In reality, McGregor is the star the UFC so desperately needs. Jon Jones. Anderson Silva. Ronda Rousey. They have all fallen, one way or another. Granted, the return of Jones is looming, and he has his own chance at holding two belts. If Jones comes back anywhere near as good as he was when he left, he won’t stop at just holding the light heavyweight title. In all honesty, who wouldn’t want to see Jones against Fabricio Werdum or Cain Velasquez? Only time will tell. But I digress…

So, really, could the UFC just be trying to market McGregor as much as it can while the rest of the promotion’s stars recover from their downfalls? Yes. And somewhere in this line of reasoning, it all points right back to Bellator.

Who knows, maybe McGregor won’t be able to be the first person in UFC history to capture two belts at the same time — and in record time, too. Maybe he won’t be able to defeat dos Anjos. However, stranger things have happened. Regardless of whether or not you agree with the UFC’s decision to book McGregor in a lightweight title fight, you better believe that people will be watching for the chance that history could be made by McGregor. Again.