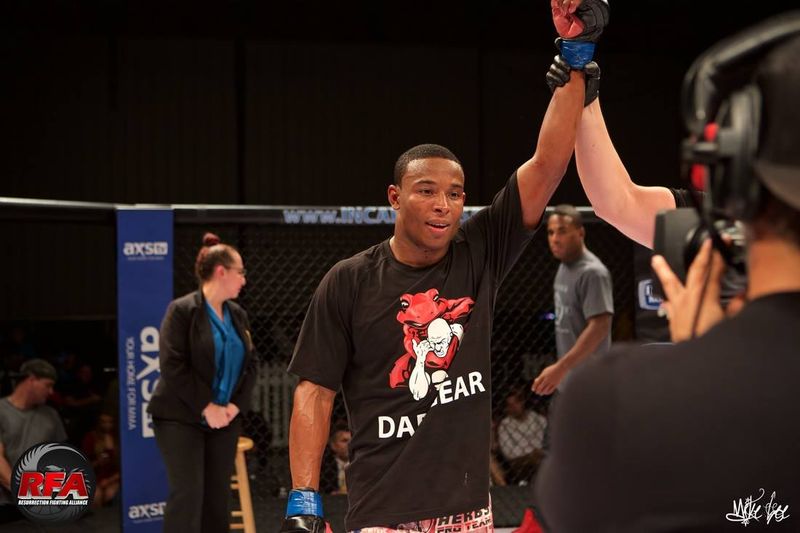 It’s business. At the end of the day, that’s what it is. Professional MMA fighters know this, and many of us watching at home know it too.

One moment, a fighter has everything, including a roster spot for the largest MMA organization in the world. The next moment, it’s all gone. Injuries, poor performances and clashes with executives are the just three of the cruel, yet common reasons fighters can’t take what they have for granted.

Resurrection Fighting Alliance welterweight Joe Merritt understands. Merritt, fighting on short notice, made his UFC debut at UFC Fight Night 70: Machida vs. Romero. It didn’t matter if ample time to prepare wasn’t given, Merritt wasn’t going to turn down the opportunity. Can you blame him? As an athlete, he had to seize the chance to succeed. Success tastes sweeter when obstacles are stacked against you.

The evening didn’t go as Merritt envisioned. He ended up losing a unanimous decision to Alex Oliveira, struggling to fend off the grappling attack of the Brazilian. Those close to him knew he was capable of more and were eager to see how he would do on a full camp in his second UFC fight. But plans change. It’s a business. Merritt was released from his contract and signed back with the RFA. Now, after dusting himself off from the June 27 defea, which is his only career loss, Merritt finds himself in the co-headliner of RFA 33 against another Brazilian, Felipe Fogolin.

“I don’t even know who the hell he is,” Merritt told Combat Press. “I don’t watch film. They’re all black belts. They all do the same thing — boring. No disrespect, but they’re all boring. Every Brazilian I’ve looked at, it’s boring, except for Anderson Silva and José Aldo. At the end of the day, I call a spade a spade. The majority of them don’t wanna fight. They’re like Royce Gracie and those good ol’ days guys. The game has evolved. It’s time to bring excitement to the people and have a good show.

Outside of the cage, Merritt models and acts. He’s a self-proclaimed “triple threat.” In this ever-alarming landscape of MMA where men and women sacrifice their bodies for what sometimes amounts to scraps, a full-time fighter is rare to come by. Still, when it caught wind that Merritt modeled, people were quick to question whether he had any talent.

“I didn’t get in and read everything. I just know one of my teammates brought an article from a media outlet,” said Merritt. “They were just going off on me — ‘Oh, man, this guy and this, that and the other, blah, blah, blah…’ But I stepped back and smiled like, man, the media is criticizing the hell out of me. Like, give me an opportunity to display some of my skills. But hey, they’re entitled to their own opinion. All that criticism stuff, it’s in one ear and out the other. Look, I’m just trying to put smiles on people’s faces and have fun.”

On Friday, Merritt has the opportunity to put smiles on faces and show the UFC that releasing him was a bad decision. It’s nothing personal. It’s just business.