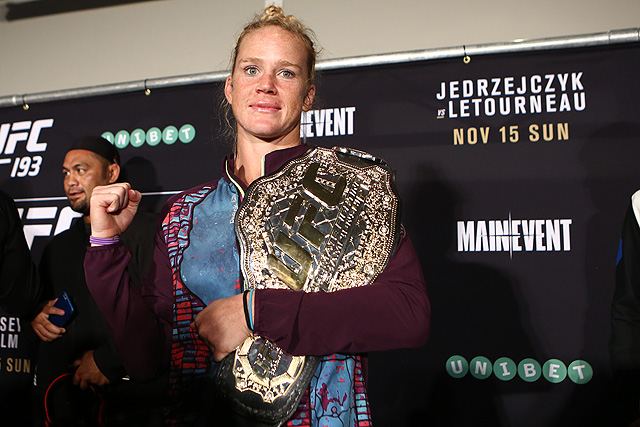 Time and time again, athletes reach a certain point where everything stops. Whether age becomes a factor or increased pressure to be better, something always happens. Most recently, at UFC 193, the unthinkable occurred. Long-reigning, dominant UFC women’s bantamweight champion Ronda Rousey was completely outmatched and knocked out by Holly Holm. It was a fight that Holm had little chance of winning on paper, as evidenced by her UFC tenure up to this point. However, as we all tried to grasp what had just happened, Holm had her hand raised and the title belt fastened around her waist.

Here’s a question to ponder in the aftermath of Holm’s upset victory: Did Holm coast through her first couple of Octagon appearances and purposely struggle against lesser opponents to prepare for her moment to shock the world?

Just think about it.

There was her debut against Raquel Pennington at UFC 184. Holm, a highly decorated boxer and a skilled kickboxer, won a split decision in a fight where many touted her as the easy favorite.

Her next bout came against Marion Reneau at UFC Fight Night: Mir vs. Duffee. Holm ended up taking the unanimous decision over the 38-year-old Reneau.

Yet, in those wins, Holm did not look like a top-10 bantamweight, let alone a title contender. So how did Holm, in less than four months’ time, go from barely entertaining fans to shocking the world? Only one thing comes to mind: Brilliant coaching.

If you were to ask the top 10 women’s bantamweight contenders to put aside personal vendettas against Rousey and pick a winner between Rousey and Holm, most of them would point to Rousey to take the win. They saw the champion taking Holm down, exposing her weaknesses and adding another arm to her ever-growing collection.

Holm knew that Rousey would be watching tape of her well before she ever came to the UFC. Holm even fought on the same card as Rousey at UFC 184 and did not impress Rousey or the fans in attendance.

If my theory is correct, Greg Jackson should be put in jail for being a criminal mastermind. Jackson and his co-conspirator, striking coach Mike Winkeljohn, have been in this game for a long time. They, dare I say it, created the light heavyweight wrecking ball known as Jon Jones. They have the knowledge and experience to fine-tune a good athlete into a champion. So, with Holm fighting in the same weight class as Rousey, it took a little extra planning.

They as coaches knew Rousey and her camp would analyze every single one of Holm’s fights. She would analyze all of Holm’s movement and striking. Everything. So, how do you prepare for someone who already knows what you are going to do? You bluff.

Holm put on a striking clinic against a formerly invincible Rousey. The decorated boxer made it into the second round with a woman who had only been out of the first round one time in her career. It might sound absolutely crazy, but at the same time, maybe John Dodson just lost his nickname. Why? Well, because if my theory is right, Holly Holm is the new “Magician.”