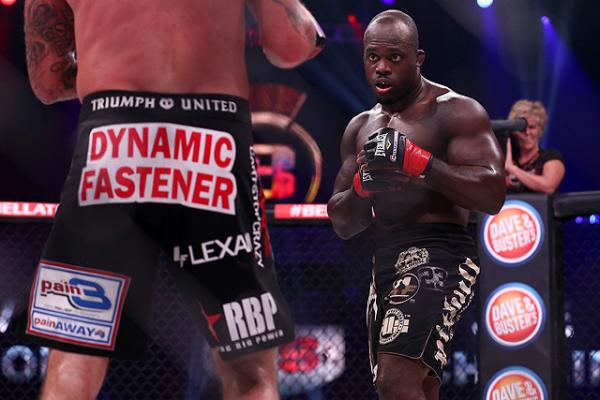 If you’re a fan of quick and potentially violent knockouts, you’re probably looking forward to Bellator 146 this Friday. It’s a good bet you will see two of the most violent knockout artists decide who goes to sleep.

Everyone still remembers Hisaki Kato’s emphatic statement in his Bellator debut in June. Kato delivered a devastating first-round knockout of Joe Schilling with a Superman punch. It was replayed on an endless loop, including on ESPN. You know who else remembers that punch? Kato’s upcoming opponent, Melvin Manhoef.

“I thought he had a great performance,” Manhoef told Combat Press. “He took [Schilling] down with that Superman punch. It was a great win for him.”

Kato is a seeker of the knockout and compiled a 4-1 record prior to his Bellator debut with each fight ending in a knockout or TKO. Manhoef, who has 27 finishes via strikes in MMA action and 27 more wins via strikes in kickboxing competition, is no stranger to decisive finishes either. He has stepped in the cage or ring with some of the most well-known names in mixed martial arts, including Mark Hunt, Gegard Mousasi, Tim Kennedy, Robbie Lawler and Paulo Filho.

Unfortunately, Manhoef was knocked out in his last two Bellator fights against Schilling and Alexander Shlemenko. However, Shlemenko’s victory over Manhoef was changed to a no-contest when it was revealed after the fight that Shlemenko tested positive for elevated testosterone levels.

Fans couldn’t be blamed for worrying about Manhoef’s health after he suffered back-to-back knockouts.

“I’m ready to go and have the green light,” Manhoef said. “There’s nothing to worry about.”

Manhoef didn’t do any training for the first two to three months before gradually getting back into his routine.

“My health’s good. I’ve been fine,” he said. “I took six months off to recover and it went very well.”

Manhoef’s fight against Kato this Friday will be his fourth in Bellator. Manhoef has traveled the world to ply his trade in MMA.

“The stand-up part is more popular abroad through K-1 and in Europe, but it’s getting bigger in the USA,” Manhoef said.

Bellator is helping to promote the new Rizin Fighting Federation in Japan, which will hold its first card on New Year’s Eve and will feature stars such as Fedor Emelianenko and Muhammed “King Mo” Lawal, who will represent Bellator in an eight-man light heavyweight tournament. If Manhoef received permission from Bellator, he’d love to be a part of this new promotion.

“I love Japan. It’s where I started my career,” Manhoef said.

For now, his focus is solely on facing Kato this Friday at Bellator 146 and putting on an exciting performance for fans.

“I always come to fight,” Manhoef said. “There’s no time to blink or get a coffee or beer. I give my all to fighting.”