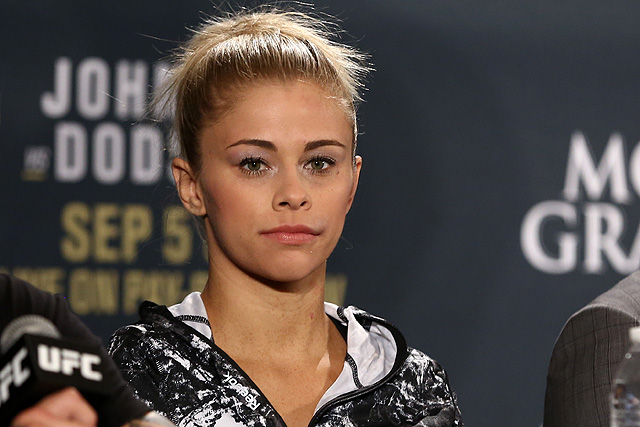 Will Paige VanZant’s Rise Come to a Halt Against Joanne Calderwood?

Paige VanZant has quickly become one of the fastest rising stars in MMA. Few fighters have become a household name amongst fight fans as quickly as VanZant, who sits just a win away from vaulting into title contention while simultaneously having her popularity grow to the point that she’s been called the next Ronda Rousey. Thus far, VanZant has validated all of the hype with a trio of impressive wins in the Octagon.

Coming off a dominant win over Alex Chambers at UFC 191 in September, it was clear that “12 Gauge” was in need of a high-quality opponent in order to prove her worth as a top contender to the 115-pound crown. The UFC met that demand and then some, throwing VanZant a sizable test in the form of Joanne Calderwood and making the bout the main event of a Dec. 9 UFC Fight Pass card to boot.

Even though VanZant is already being viewed as a potential future champion in the UFC’s strawweight division, the 21-year-old Team Alpha Male product has looked far from unbeatable in her Octagon career thus far. This upcoming fight with Calderwood should answer a lot of questions people have about VanZant’s validity as a title threat.

There’s no denying that there’s been a lot to like about VanZant through three UFC fights. “12 Gauge” proved she could brawl in her UFC debut, putting on a barnburner with Kailin Curran in a “Fight of the Night”-winning performance that ended in a third-round TKO victory for VanZant. She showed off her technical skills in her next bout, completely shutting down veteran Felice Herrig en route to a dominant decision win on Fox earlier this year. VanZant’s submission victory over Chambers last month was equally impressive. Utilizing a strong grappling game and unique strength in the clinch, VanZant has been giving every one of her opponents fits with her pace and tenacity. She’s found a recipe for success thus far. Whether VanZant can put that strategy to good use against a superior striker like Calderwood will go a long way toward proving she’s legit.

However, while VanZant has been relatively dominant against her opposition so far, Calderwood is a very different opponent than VanZant’s previous Octagon foes. VanZant has been able to basically rush all of her UFC opponents and get her hands on them quickly, primarily because none of them had the striking ability to make “12 Gauge” pay if she decided to put herself in a bit of danger in order to grab the clinch or shoot for a takedown. That plan of attack may not be as effective against the Scottish Muay Thai champion Calderwood, who is going to look to counter VanZant’s aggressiveness with offense of her own.

Calderwood is far and away the best striker that VanZant has fought in her MMA career, and that’s the facet of VanZant’s game we’ve seen the least. While VanZant has looked decent when trading shots, her ability to hang with “JoJo” in the striking department could easily be what decides the bout, especially if she starts to get outclassed. VanZant is improving on the feet, but she’s still miles behind a lifetime striker like Calderwood at this point in her career.

Even though fans are treating this fight as an opportunity to check out VanZant’s striking, whether or not that actually happens will land on Calderwood. As good as the Scot is on the feet, she’s had a ton of trouble when she’s ended up on the mat in her career. Calderwood suffered a shocking upset defeat at the hands of Maryna Moroz just two fights ago when the Ukrainian upstart locked in an early armbar, and she also suffered an unofficial loss to Rose Namajunas on The Ultimate Fighter 20 last year when Namajunas locked in a kimura.

Calderwood is incredibly good if she can find her range and start unloading combinations on the feet, but her mat game and takedown defense have proved to be flawed. If VanZant can take advantage of these weaknesses in Calderwood’s game, it could lead to a short night for “JoJo.” Furthermore, Calderwood hasn’t shown any sort of finishing ability on the feet as of late, so it seems like this fight is tailor-made for VanZant to grind out her opponent and pick up a win, even if she has to eat a few punches in the process.

There’s a good chance that VanZant will be a little more calculated and pick her spots against Calderwood instead of going for broke right out of the gate, but the combination of “12 Gauge’s” relentlessness and cardio is going to be a lot for Calderwood to handle. As long as VanZant doesn’t become overly aggressive and start rushing headfirst into combinations, it’s hard to envision her losing this fight. Calderwood has finished her opponent in less than half of her wins, and none of the women she’s put away have anywhere near the toughness or brawling ability that VanZant possesses.

Calderwood may represent a step up in competition for the UFC’s next female star, but it’s a step up that VanZant is ready to take. Calderwood may be extremely proficient in the areas where VanZant needs to improve, but the best way to shut down a striker’s offense is to give them absolutely no space. “12 Gauge” might be the best in the division at doing just that. VanZant should pass her first major test with flying colors, and if she keeps improving at the rate she has thus far in her Octagon career, it won’t be long before one of the promotion’s fastest rising stars has UFC gold in her sights.