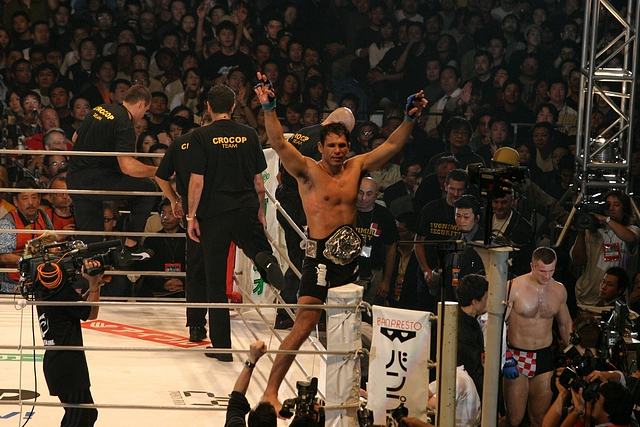 Over the course of this multi-part series, we will take a look back at the greatest upsets, comebacks and victories of Brazilian legend Antonio Rodrigo Nogueira’s 16-year MMA career. In part one, we revisited Nogueira’s second Pride bout, in which the Brazilian topped Mark Coleman. In part two, we’ll follow Nogueira’s rise to championship status.

Nogueira’s next fight was for the inaugural Pride FC heavyweight championship at Pride 17: Championship Chaos.

It was Nov. 3, 2001. Heath Herring was 18-6, coming off a victory over UFC heavyweight tournament champion Mark Kerr and ready to be the second man to dethrone Nogueira (Dan Henderson had been the first, handing Nogueira a split decision loss under the RINGS banner).

Herring pushed the fight immediately, looking to force an exchange in the center of the ring, causing Nogueira to shoot a double-leg takedown and taking a knee to the face for his efforts. The takedown would begin a sequence of grappling exchanges that would lead to what would become one of the best heavyweight fights in Pride history.

The relentless submission attempts came one after another. Herring muscled his way out of kimura and triangle attempts with sheer brute strength. A stand-up from Herring followed a failed triangle attempt. The men exchanged punches in the corner, a sequence that has found its way to MMA highlight reels everywhere. Nogueira landed the cleaner punches before the fight headed back to the floor. Nogueira looked to control the wrists of Herring throughout the bout and sought to launch his legs up for his patented triangle. While Herring was able to reverse and escape out of the multitude of submission attempts, Nogueira was able to control the bout standing and on the mat. The decision victory earned Nogueira the Pride heavyweight title.

Nogueira locked up another triangle submission in his next bout, putting the tough Enson Inoue to sleep six minutes into their bout. Inoue fought his way out of the early submission attempts, but Nogueira didn’t give him any space.

Nogueira next fought under the UFO Legend banner against light heavyweight King of Pancrase Sanae Kikuta. Nogueira outmatched the smaller Japanese fighter, knocking him out in the second round with a right straight as he caught Kikuta’s right kick with his left hand.

The size contrast would flip in his next bout, a battle with super heavyweight prospect Bob Sapp that we’ll look at in part three of this multi-part Nogueira career retrospective.