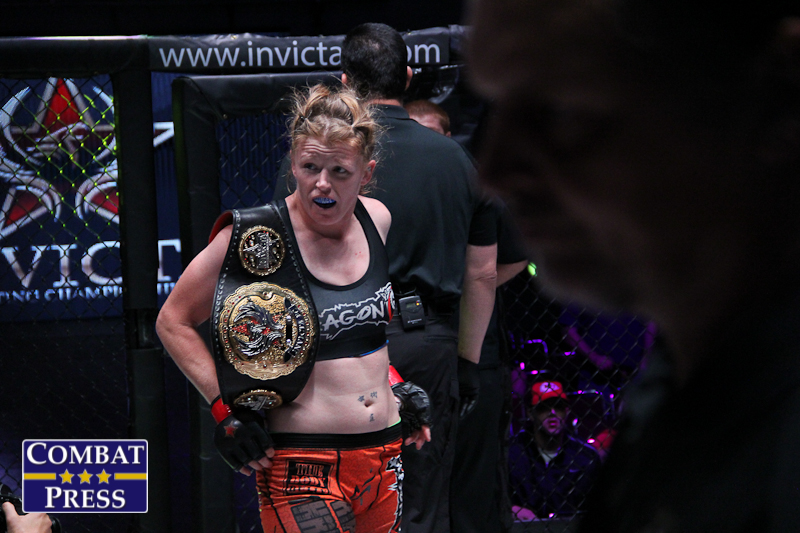 Invicta FC 14: What’s Next For the Winners?

Invicta FC 14 is in the books. As the norm with Invicta events, it was a night of entertaining fights that showcased the present and the future. Ten ladies walked out with their hands raised, and all 10 will need a new opponent for their next fight. Julie Kedzie has done a great job as matchmaker, but I’m here to help make her life a little easier. Here are the match-ups that we should see for the Invicta FC 14 winners.

During the Invicta FC 14 post-fight press conference, company head Shannon Knapp announced that Cyborg will drop down to 140 pounds for a fight in November. She also seemed to allude to a match-up between Evinger, who defeated Pannie Kianzad by way of TKO in the Invicta FC 14 headliner, and Cyborg. Evinger seems to be on board. Evinger is a promoter’s dream fighter. She’ll fight anyone, anywhere, anytime. Many have been vocal about Cyborg’s recent competition. In Evinger, the Brazilian would face a fighter who is one of the best in the world and will be no slouch.

Yes, Bennett, who edged Katja Kankaanpää on the scorecards at Invicta FC 14, recently dropped to strawweight and has competed in the lower weight class for her past two fights. However, the best DeAnna Bennett in the cage right now is the one who fights at 125 pounds. Bennett, with wins over Michelle Ould and Jennifer Maia under the Invicta banner, was well on her way to earning a title shot at flyweight. There should be no issue with her getting an immediate title shot by moving back to flyweight. A match-up of Bennett against Honchak or Porto would be great for the promotion.

Modafferi’s career resurgence is about as good a story as you can find in women’s MMA. Since making the move to Syndicate and working with coach John Wood, the veteran, who stopped Mariana Morais via strikes at Invicta FC 14, has been winning fights and doing so impressively. Her only recent loss came to Porto in a No.1 contender’s fight to determine a challenger for the flyweight title, but Porto missed weight for the bout. Modafferi-Porto would be a rare trilogy fight, so it would be fun to see that promoted. Whomever Modafferi ends up fighting, one more win should get her a title shot.

“KGB” put on a great performance in her submission win over Rachael Ostovich, showing improved grappling to go along with already well-versed striking. Lee will compete for Legacy FC in her next outing, but when Invicta welcomes her back, she should be paired with fellow Invicta FC 14 combatant Aspen Ladd. It wouldn’t be a bad match-up between Lee, who is still just a four-fight veteran, and Ladd, who is undefeated through just two pro bouts.

Dandois was successful in her move back up to featherweight. Her submission victory over Megan Anderson immediately puts Dandois on a short list of contenders in the shallow division. Van Duin is coming off a loss to Cyborg at Invicta FC 13 and is looking to get back in the cage as soon as possible. You never know, Dandois could already be looking at a title shot if she can beat Van Duin.

Jacobson came out the victor after a thrilling fight against Jamie Moyle that earned the ladies “Fight of the Night” honors. Jacobson is inching ever so close to a title shot, and a matchup against Eggink would prove if she’s ready for the big step up. Eggink has been out of competition since becoming a mother, but she has made it clear that she will be fighting again.

This match-up has fireworks written all over it. Frey, who topped Liz McCarthy on the scorecards at Invicta FC 14, has continued to impress. Her boxing is about as technical as that of anyone in the division. By pitting Frey against Brazilian Jiu-Jitsu ace and former Invicta atomweight champion Tiburcio, we can see how far Frey has evolved as a martial artist. She would be tested on the mat and enter the fight as the underdog — slight underdog, as she is by no means heavily overmatched — but if she pulled off a win, Invicta FC will have unearthed another star.

Aldrich and Kortmann were originally scheduled to face off at Invicta FC 14, but Kortmann was pulled due to visa issues. Aldrich went on to defeat Rosa Acevedo via first-round knockout. So, let’s try the original pairing again. Kortmann is a third-degree black belt in judo, and the fight would be an interesting contrast in styles. Let’s just hope Kortmann, or whomever Aldrich faces next, stays away from cat singlets.

We already touched upon this match-up earlier. Ladd looked impressive at Invicta FC 14 en route to a victory. She neutralized a good boxer in Amanda Bobby Cooper and was able to finish the fight on the ground via armbar. Ladd is an undefeated rising prospect that shouldn’t be overlooked moving forward. Lee is another emerging star in the flyweight division, making this a showdown between two fighters who could be the future of Invicta’s 125-pound weight class.

Though Spencer’s win — and professional debut — against Rachel Wiley came at lightweight, she has stated that moving forward she will be competing at featherweight. Leibrock just made her professional debut at Invicta FC 13 with a quick finish over Marina Shafir. A battle of promising young fighters would be good for the shallow featherweight division.