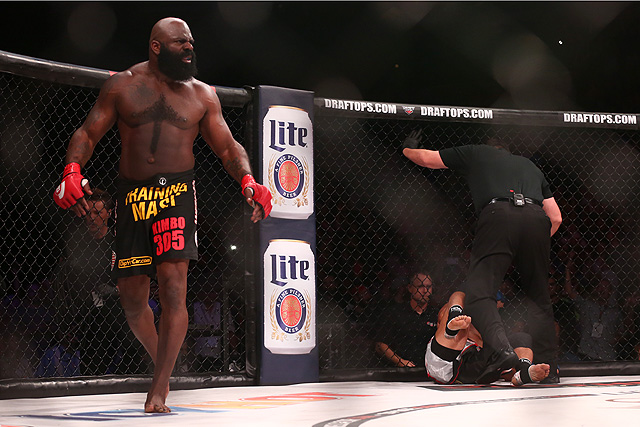 Kevin “Kimbo Slice” Ferguson emerged victorious at Bellator 138. With questions surrounding his MMA career moving forward, Slice made it clear that he’s heading to the top.

Slice entered Bellator 138 as the main focus of pre-fight chatter among MMA fans and analysts. It was his first time competing in MMA since 2010 and his first combat-sports appearance since a boxing match in 2013.

The former YouTube sensation faced off against a man he was originally supposed to meet in 2008 — MMA legend Ken Shamrock. The backstory of their failed 2008 clash was highlighted numerous times heading into Bellator 138, leading to some intense verbal sparring sessions.

Shamrock and Slice clearly had no love lost heading into the event, but Slice has seemingly put this rivalry behind him.

“I have no disrespect towards Ken,” Slice told Combat Press. “We fought, and whether it was a win or a loss, it would’ve been over for me.”

Shamrock had Slice in trouble early with a rear-naked choke that looked all but locked in. It appeared as though the much-hyped main event would be over before it even began.

Slice managed to survive the choke attempt and get to his feet.

“At American Top Team, I’ve been put to sleep three times,” Slice revealed. “The last time, I got pissed off, cursed at my coach, left, came back the next day with an attitude and was ready to roll again. Tonight, to be put in this situation, I’ve been here before, you know. So I knew I was going to get out of this.”

Slice was able to rebound from the rough start and would end up flooring Shamrock with a right hand. Referee John McCarthy stepped in to halt the bout and award Slice the first-round victory.

Despite his modest MMA record, Slice is without a doubt one of the biggest stars in MMA in terms of fan support. He appeals to the casual fans who want to see the man from YouTube in a cage and to the hardcore MMA fans who tune in to see him lose.

With the level of viewers Slice brings in, Bellator President Scott Coker is no doubt going to look to get Slice in another Bellator main event quickly. However, what kind of fight and level of opponent he faces is something that remains to be seen.

“Of course I want big-money fights,” Slice said. “But big-money fights leading up to a title. Being a senior fighter, you have to be both smart and wise about who you fight. You don’t want to just fight anybody in a meaningless fight. It has to make dollars, so it can make sense.”

With Coker at the helm, fans can expect a fan-friendly pairing for Slice’s next fight. If Coker’s time in Strikeforce has taught us anything, it’s that while he may not always put on the best fights in terms of rankings, he generally delivers when it comes to pleasing a wide array of audience members.

Slice immediately became the biggest star in the promotion upon signing a contract, which all but guarantees him another high-profile fight down the road. And if the man himself has anything to say about it, the fight could have title implications.