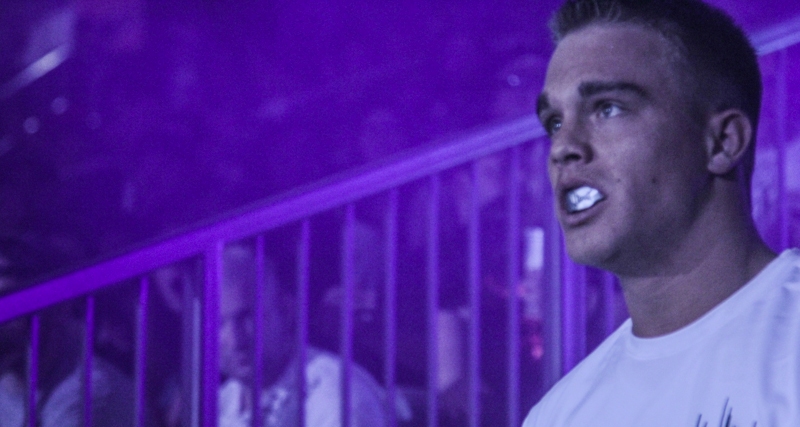 “Life is really simple, but we insist on making it complicated.” – Confucius

Troy Nawrocki, a self-proclaimed ‘good ol’ boy’ from Bellevue, Neb., insists that’s just not the case with his life.

Nawrocki began wrestling in high school and had a knack for it. Not long after he finished high school, the sport of MMA came calling. On just a week’s notice, Nawrocki not only fought, but won via first-round rear-naked choke.

“When I graduated, a guy asked if I wanted to fight the next weekend, so I did,” recalled Nawrocki. “I’ve loved MMA ever since.”

After that short-notice amateur debut, Nawrocki went on to win five in a row before tasting defeat for the first time in 2013. He returned to his winning ways before competing in the VFC cage at Harrah’s in September of 2014. That night, the highly anticipated outdoor event was hit with freezing cold temperatures and the slippery canvas barred Nawrocki from implementing his game plan.

“It was 38 degrees when I stepped in the cage and I definitely didn’t feel as comfortable as I usually am with the way the mat was that night,” explained the fighter.

Nawrocki lost via first-round submission that chilly night. Following the bout, he found himself in need of knee surgery which has kept him out of competition for nearly one year. Now, he’s ready to get back to business.

“I feel strong and just as good as before my injury.”

Nawrocki has worked hard to earn a 7-2 record as an amateur. Training out of Premier Combat Center in Omaha, Neb., the young prospect feels his coaches and team have prepared him for anything. UFC veteran and Premier Combat Center’s MMA coach, Ryan Jensen, says Nawrocki is undoubtedly talented and committed to his craft.

“Troy has been putting in the hard work. He comes in and gives his best effort every time; his skills have continued to grow tremendously,” said Jensen of Nawrocki.

Nawrocki is confident with his fight camp thus far, crediting Jensen, as well as his Muay Thai and boxing coaches, Kurt Podany and Jose Campos, whom he claims are the best in the business.

In addition to his success in MMA, Nawrocki has also thrived as a firefighter. Currently employed at Fort Calhoun Nuclear Power Station, he has high career aspirations and is currently seeking employment with Omaha Fire Department. Along with his personal career goals, Nawrocki is also setting his sights high with his MMA career — but he’s not in a big hurry.

“I would obviously love to be in the UFC or some other big MMA promotion,” said Nawrocki. “I would love to make a second career out of it.

Much like his approach to life, Nawrocki keeps his preparation for MMA simple. And he’s ready to show it on June 6.

“If you’re going to fight, you can’t half ass it,” he proclaimed. “It’s all or nothing.”