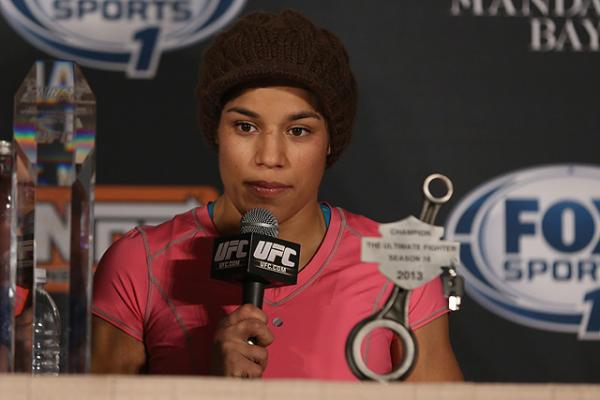 While the MMA world enters a revolving cycle of discussion surrounding Ronda Rousey and a trio of women who could take her throne, there’s another challenger who is flying under the radar in her return to the Octagon.

Last year, Julianna Peña, winner of The Ultimate Fighter 18, endured what can only be described as a devastating knee injury. Just hearing about the injury itself is enough to make anyone reach for their knee. She underwent successful surgery after tearing a hamstring, her anterior cruciate ligament, her medial collateral ligament, her lateral collateral ligament and her meniscus. Peña’s return, which is set to take place at UFC Fight Night 63 this Saturday, is something of a journey in itself.

Almost immediately after news broke that Peña had injured her knee, UFC President Dana White commented on the injury through his Twitter. White held nothing back as he threw Peña’s teammates and gym under the bus. Although White proclaimed that Peña would be on the shelf for two years, the fighter is making a quick turnaround in a little over a year. She appears to be in great shape leading up to her bout with Milana Dudieva.

Peña is a name that’s often forgotten in discussions of the top contenders in the UFC’s women’s bantamweight division. It’s understandable considering she’s been out of action since November 2013 and, in the meantime, the UFC has built up a pair of contenders within the division. Rousey’s next opponent, Bethe Correia, has done a masterful job of utilizing verbal jabs to secure her spot opposite the champ in the Octagon, and Holly Holm is perhaps the most accomplished competitor in the division outside of Rousey. The talk of Cristiane “Cyborg” Justino facing Rousey won’t go away quietly either.

But the fact that few people are talking about Peña may be a blessing in disguise for the returning fighter. She’s slid in the rankings a bit due to the inactivity, but she could easily leapfrog a number of women ranked ahead of her. There are a handful of ladies that have already lost to Rousey either in Strikeforce or the UFC, and if Miesha Tate defeats Jessica Eye in June, that would clear another contender out of Peña’s way.

Even with the optimism of Peña returning to a division desperately in need of new challengers at the top, there’s still the real fact that she’s not ready for Rousey at this moment. There’s no doubt Peña is a talented fighter. She went out and shocked viewers by taking out Rousey’s top pick (and universal favorite) Shayna Baszler in the first fight of TUF 18. She then avenged a previous loss to Sarah Moras by claiming a submission win and ran through Jessica Rakoczy in the finale. Although still a raw prospect, Peña clearly has room to grow into a credible challenger down the road.

Despite how fans felt about Peña on TUF 18, her name was front and center for millions of people to see. Not every fighter gets that type of exposure while climbing the ranks of UFC Fight Pass preliminary contests. Peña is friends with the aforementioned Tate, who could provide a stamp of approval if the UFC pushes Peña up the ranks. Peña also has a fan-friendly style of moving forward that combines submission attacks with powerful ground-and-pound. And, of course, it doesn’t hurt that she can look good with the cameras on.

UFC Fight Night 63 has the featherweight division under the microscope with Chad Mendes and Ricardo Lamas throwing down in the main event. But fans who may have forgotten about Peña could be in for a nice reminder prior to the featherweights throwing down. Dudieva has a nice record to her credit, along with some nifty submission victories, but she also holds losses via TKO and tapout. It’ll be a good test for Peña in her first fight since late 2013. Even though Dudieva doesn’t have the name recognition of an established Octagon veteran, don’t be surprised if Peña, with a victory, begins to creep into the conversation of top prospects to keep an eye on.