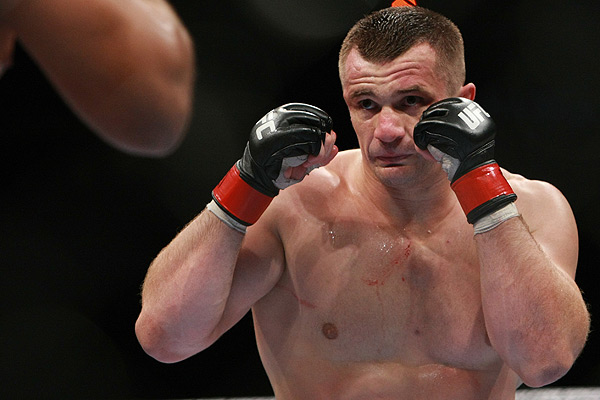 In the night’s main event, former title challenger Gabriel Gonzaga clashed with former Pride superstar Mirko “Cro Cop” Filipović for a second time. The pair met in 2007 with the Brazilian Gonzaga knocking out Cro Cop with his own weapon, the head kick. Since then, both fighters exited the promotion and returned. Gonzaga had gone 4-3 in his second stint with the organization, with all four wins coming by finish. Croatia’s Filipović had found success in both MMA and kickboxing, earning him another opportunity in the Octagon.

The co-main event featured a pair of light heavyweights known for finishes as Poland’s Jan Blachowicz met England’s Jimi Manuwa. Blachowicz erased Ilir Latifi in under two minutes in his promotional debut in October. Manuwa looked to rebound from the first loss of his career, as he fell to Alexander Gustafsson last March.

In a rematch many years in the making, Mirko “Cro Cop” Filipovic exacted revenge on Brazilian Gabriel Gonzaga with a third-round TKO. Gonzaga used his takedown game and top control to dominate the fight through two rounds. Cro Cop barely generated any offense in the first two rounds, just missing a head kick. Gonzaga opened up a large cut over the left eye of Cro Cop with an elbow. However, the fight turned in round three as Cro Cop landed multiple standing elbows to rock the Brazilian. He followed Gonzaga to the mat and finished him with strikes from inside the guard.

The night’s co-main event wasn’t the fireworks that many expected. British light heavyweight Jimi Manuwa claimed a hard-fought decision over Poland’s Jan Blachowicz. The pair spent a large portion of the fight in the clinch, with Manuwa controlling the action. Blachowicz used his jab well, but Manuwa constantly marched forward and used his knees in the clinch. The pair went for broke in the final moments of the bout, with Manuwa wrapping up the win on the scorecards.

It was a grueling, 15-minute affair, but Polish welterweight Pawel Pawlak took home a decision win over Sheldon Westcott. Westcott controlled the opening round with a smothering clinch game along the cage. The Canadian tried to employ the same strategy in round two, but Pawlak was too strong, taking advantage of an exhausted Westcott. Round three was all Pawlak, as he tossed Westcott to the mat and controlled him from the top until the final bell.

In her Octagon debut, Ukranian Maryna Moroz stunned the strawweight division, submitting Joanne Calderwood with an armbar in just 90 seconds. Moroz was the aggressor on the feet, backing Calderwood up against the fence. As the fight found its way to the mat, Moroz quickly locked onto Calderwood’s arm and coerced a tap.

Newcomer Bartosz Fabinski became the first Polish fighter to earn a win at the event, dominating South Africa’s Garreth McLellan by unanimous decision. Fabinski’s takedowns were the story throughout, as he repeatedly but McLellan on his back. McLellan had no answer and spent the vast majority of the fight on his back.

Brazilian Sergio Moraes returned from a lengthy layoff and picked up his third straight win, topping newcomer Mickael Lebout on the scorecards. The first round was largely a feeling-out process, but Moraes sealed the round with a late takedown. Lebout controlled the range in round two to even things up, but Moraes used a takedown and his world-class grappling to lock up the win in the final frame.

Returning to featherweight, Yaotzin Meza used superior wrestling and top control to defeat Poland’s Damian Stasiak. The first round saw both fighters have strong moments, but it was Stasiak that finished the round on top. Meza turned the tide back in his favor in the middle stanza, controlling the Pole from top position and nearly earning an arm-triangle choke. Round three was more of the same as Meza cruised to the decision win.

American heavyweight Anthony Hamilton outlasted Poland’s Daniel Omielanczuk to claim a unanimous decision win. Hamilton powered forward at the opening bell, clipping Omielanczuk with a right hand and landing in his guard. He battered the Pole with body shots. Omielanczuk turned the tide in round two, scoring a takedown of his own. Hamilton dug deep and outworked Omielanczuk in the clinch to claim the final round and the fight.

In a battle of debuting strawweights, Russia’s Aleksandra Albu submitted Poland’s Izabela Badurek in round two with a guillotine choke. Albu landed with combinations on the feet, but Badurek turned the fight into a grinding affair from the clinch. In the second round, Albu opened up with her hands, forcing Badurek to shoot for a takedown. Albu latched onto Badurek’s neck and quickly forced a tap.

Scotland’s Stevie Ray was successful in his UFC debut, stopping Poland’s Marcin Bandel by second-round TKO. Bandel looked to get Ray to the canvas, frequently pulling guard and looking for leg locks. Ray never panicked and nearly finished the fight with an arm-triangle. In round two, Bandel pulled Ray straight into mount and Ray unloaded with heavy shots that forced the referee to intervene.

French featherweight Taylor Lapilus showcased an excellent use of range and strong takedown defense, claiming a unanimous decision win over China’s Rocky Lee. Lee worked hard to get the fight to the mat throughout, but Lapilus kept the fight upright and scored with repeated combinations.