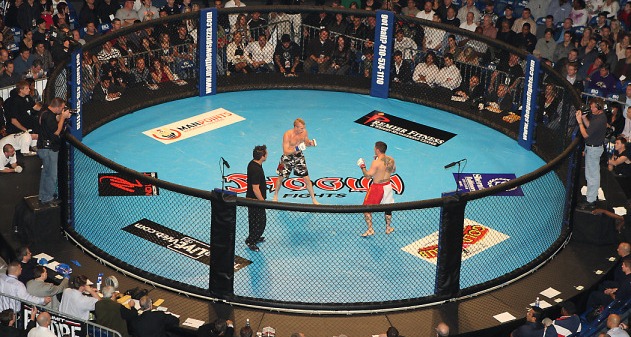 Although we’re still a year and a half away from the next presidential election, Royal Farms Arena in Baltimore, Md., will hold an inauguration of its own this Saturday, April 18.

The 12th edition of Shogun Fights will feature the biannual fight card’s first-ever title affair. Shogun’s first welterweight champion will be crowned when Micah Terrill takes on Cole Presley. That fight will headline this Saturday’s card, which features 11 additional fights. Here’s a look at the entire lineup.

Micah Terrill and Cole Presley, a pair of Shogun Fights veterans, square off for the promotion’s first title belt. The pair has a combined 10 appearances with the promotion and they are well-known by local MMA fans. Both guys love to scrap, rarely letting their fights go to a decision. Fans should expect a fast-paced, entertaining bout that will go into the championship rounds.

Presley rides a two-fight winning streak into this title bout, but Terrill’s striking will be the difference. An entertaining brawl will commence, with both guys leaving nothing to chance. Terrill will come out on top.

Vaja Iormaghvili is a Shogun Fights veteran who has fought under the promotion’s banner three times. Unfortunately, he’s lost twice. Jon Delbrugge is a regional MMA veteran who has fought six times in the last two years. He is tough and savvy, with all of his victories coming via finish. He’ll find the same outcome here.

Robert Sullivan is riding a two-fight winning streak and previously secured a victory in Bellator in 2013. Jon Vinyard suffered a TKO loss in his second MMA fight at Shogun Fights XI last year, and I like the rough and tumble Sullivan to make that two in a row for Vinyard.

Francisco Isata won his last fight at Shogun Fights XI, and he even boasts an appearance with the World Series of Fighting. The armbar is his preferred method of submission, and he will use it here against Mahmoud Rashid to pick up his fifth victory.

James “Binky” Jones is a local legend in the Maryland mixed martial arts scene. He’s a Baltimore native and a mentor to the local youth. Jones hemmed and hawed about coming back to Shogun Fights following his victory there last year, but after soliciting the opinion of those in attendance, he decided to give it one more shot. Now, he’ll fight Chris Cain. If this is Binky’s last fight, it would only be fitting for him to go out on top.

Dan Root is a cult favorite at Shogun Fights due to his multiple submission victories for Team Ground Control in Baltimore. Elder Ramos is as tough as they come. He fought six times in 2014. Unfortunately, that mileage will catch up with him and allow Root to notch another submission victory on his belt.

Rob Watley is enjoying the momentum of two consecutive wins, including a TKO victory at Shogun Fights XI last year. He’ll make it three in a row when he stops Daniel Chacon.

This will be the second professional bout in the careers of Mike Otwell and Trevor Thompson. Otwell is coming off a victory, whereas Thompson sustained a loss in his previous outing. Thompson was the victim of a first-round submission in his pro debut, and he will unfortunately suffer a similar fate here.

Besides sporting one of the coolest first names ever, Ratioender Melo also sports a two-fight winning streak in Shogun Fights. In Melo’s most recent fight, which took place at Shogun Fights XI last year, he scored a TKO victory. This will be Alvin Mercer’s Shogun Fights debut. He boasts a three-fight win streak of his own. This should be a fast-paced, exciting featherweight match-up. Mercer will score his fourth consecutive knockout.

Kevin Chung enjoyed a unanimous decision victory in his lone MMA fight. Josh Trainor is a former champion fighting out of Pennsylvania. Trainor’s experience will give him the edge he needs to prevail over the eager newcomer.

Jesse Stirn is 4-1 and hasn’t fought since 2013. His last scheduled bout, slated for 2014, was canceled. Adken Torchia’s last fight suffered similar unusual circumstances when it was ruled a no-contest. Both guys are unknowns on the Shogun Fights scene. Stirn, a Ground Control Baltimore fighter, will capitalize on his home-field advantage and score the finish.