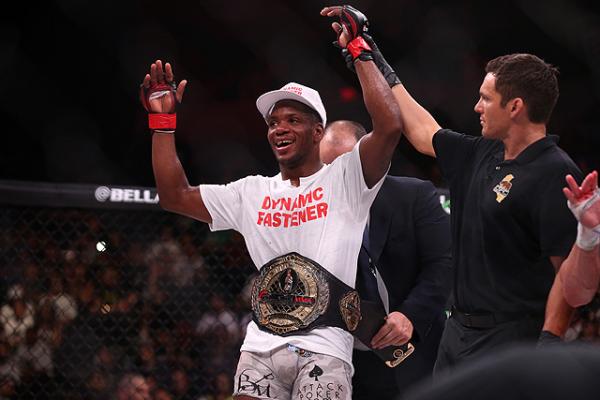 Bellator makes its lone appearance in April when it heads to the Bren Events Center in Irvine, Calif., for Bellator 136. The card, overall, is very interesting. It’s certainly stronger from head-to-toe than Bellator 135. There are some great match-ups on the prelims featuring Bellator veterans instead of the typical newcomers. The card is ultimately headlined by a title fight and another bout that could lead to a possible contender for that same crown.

After the debacle that made Tito Ortiz’s fight against Stephan Bonnar the main event over the lightweight title fight, it’s encouraging to see Bellator give top billing to the lightweight championship affair this time around. “Ill” Will Brooks, who claimed the vacant crown in November with a TKO finish of Michael Chandler, makes his return to the cage to face a fresh face in Dave Jansen. Jansen is finally getting to cash in his lightweight tournament victory after what seems like forever. Brooks seeks to really cement himself as the best 155-pound fighter on Bellator’s roster with the first title defense of his undisputed belt.

Joe Schilling makes his highly anticipated return to MMA after a short time off following his insane knockout victory over Melvin Manhoef at Bellator 131. Schilling takes on Rafael Carvalho, who will certainly play ball with the kickboxer.

The card also features a possible top contender fight in the lightweight division, as young stars Marcin Held and Alexander Sarnavskiy lock horns in what should be a great battle of submission artists. A heavyweight bout rounds out the main card and features Russia’s own Alexander Volkov against Tony Johnson.

Will Brooks returns to the cage to finally face somebody not named Michael Chandler. Dave Jansen gets the call to be that man.

Brooks has been amazing in his last two fights against Chandler. I certainly didn’t pick him the first time, and I instantly regretted the choice after he was able to steal a split decision victory over the former champion. In his second fight with Chandler, Brooks was impressive in his ability to control the fight very effectively. Eventually, his efforts led to the scariest knockout I have ever seen. The finish left Chandler out on the feet with no idea where he was. Brooks has a ton of potential to be the most dominant champion Bellator has ever had. The one knock on the champ could be his inability to stop takedowns in his first fight with Chandler.

Jansen is a strong grappler who has 10 submissions on his record. The scary part about the title challenger isn’t the fact that he is a strong wrestler who can submit you, but the fact that he has yet to be finished in 22 fights — no submission losses and no knockouts. Both of Jansen’s losses came in the WEC against Ricardo Lamas, one of the better current featherweights in the UFC, and Kamal Shalorus.

Neither fighter is likely to score the finish in this fight. Jansen isn’t as strong of a wrestler as Chandler, but he has five rounds in which to work for takedowns and could find some success. It seems kind of inevitable, but we will hear a couple of familiar words when it comes time for the decision to be read to the crowd: “And, still the lightweight champion of the world, ‘Ill’ Will Brooks.”

This is a fight between Marcin Held and Alexander Sarnavskiy is one to watch. Both fighters are possibly up for a title shot against the winner of the main event. Furthermore, they are very exciting finishers, specifically in the submission department.

Held had trouble in the past in getting over the hump and beating top fighters. However, that seems to have changed. He was able to take a decision over Patricky Freire in his last fight to close out a Bellator tournament win, and he is now perfect through his last five Bellator appearances. Held is very adept on the ground, where he has earned 11 submission victories. He is very tricky and dangerous on the ground. His submissions can come from almost anywhere — toe holds, armbars, chokes. You name it and Held has probably pulled it off inside the cage.

Held is only 23 years old, but he already has 23 total fights in his career. He has been in the cage with some of the best fighters Bellator has to offer. The Polish fighter dropped a decision to current lightweight title challenger Dave Jensen at Bellator 93. He has also fought former Bellator champ Michael Chandler and defeated veterans Ryan Healy and Rich Clementi.

Sarnavskiy is going to be a willing opponent when it comes to grappling, which could lead to some interesting scrambles and submission attempts. If you thought Eduardo Dantas and Joe Warren had fun on the ground and ended up in some awkward positions, well, Sarnavskiy and Held might outdo them.

The 26-year-old Sarnavskiy has 18 submission victories, including his last win in Bellator where he choked out Dakota Cochrane in the first round. The difference between the two fighters comes primarily in the striking department. Sarnavskiy has power and a striking arsenal that has allowed him to earn eight knockout victories. It isn’t like Held is completely powerless, though. Just ask the aforementioned Healy, who was knocked out by Held at Bellator 101. Yet, when it comes to the stand-up game, Sarnavskiy holds the edge.

This should be a fun and competitive affair, but somebody has to win. Sarnavskiy has more avenues to victory, and he will claim the decision.

Joe Schilling makes his return to MMA. The skilled kickboxer is lined up with Rafael Carvalho, yet another fighter who will look to stand and trade with the dangerous striker.

There really isn’t much that needs to be said about Schilling. He has one go-to game plan, and that is to knock out his opponent. Schilling is definitely one of the most skilled strikers on Bellator’s roster. The 31-year-old knocked out Melvin Manhoef in his last fight, which took Combat Press honors as the “Knockout of the Year” award-winning stoppage.

Carvalho won’t look to take this fight to the ground either. The 28-year-old does have almost a three-inch reach advantage, which, if he were to try to take it to the ground, could certainly help. The Brazilian might want to consider that avenue to victory, but it won’t happen. He is coming off a first-round knockout over Brian Rogers, another fighter with power, and that will only increase his confidence when it comes to trading blows with a kickboxer. Carvalho is capable of scoring the knockout in this fight — Schilling did get rocked against Manhoef, after all — but the Brazilian doesn’t carry the same power as Manhoef.

Schilling has tremendous heart, as seen in the Manhoef fight. He seemed to be on his way out in the first round, but he was saved by the bell. Then, he rallied back to secure the knockout very early in the second round.

I regrettably picked against Schilling in his last fight. I won’t make that mistake twice in a row. So, Schilling claims the win here by knockout in the second round.

Alexander Volkov returns to Bellator for the first time in a year. He’ll face Tony Johnson, who is making his first appearance for the promotion since 2011.

Volkov has fought a couple of times outside of Bellator, including a headlining fight for Union MMA Pro in February. The 26-year-old fought in his home country of Russia, where he was able to take the unanimous decision victory over Alexei Kudin. Volkov is a huge heavyweight who stands 6-foot-7 and checks in with an 81-inch reach. Opponents have always struggled to overcome Volkov’s length. The height advantage gives the Russian the ability to outstrike his adversaries — he has stopped 17 opponents by knockout. He is riding a five-fight winning streak heading into this fight.

Johnson is giving up six inches in height, and the size differential could be detrimental to his chances of victory. If Johnson can’t break into Volkov’s range and establish an inside presence by pressuring Volkov against the cage or in the clinch, then the ONE FC veteran could be in trouble. Johnson has four knockouts on his record, and he’ll seek to add to that total when he squares off with Volkov.

Johnson could very well be a positive addition to a weak heavyweight division, but Volkov should take this fight with his rangey style. He’ll snag the win, either by decision or via knockout.