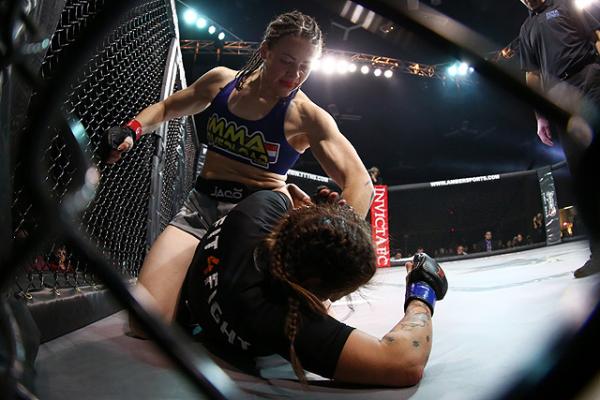 Invicta FC 12 has added another bout.

On the same day that news broke that the event would take place in Kansas City, Mo. on Friday, April 24, Combat Press has learned through sources close to the situation that featherweights Faith Van Duin and Amanda Bell will square off at the event.

New Zealand’s Van Duin was originally expected to make her promotional debut at Invicta FC 10 in December of 2014 against Charmaine Tweet. However, the Texas Department of Licensing and Regulation refused to medically clear Tweet and Van Duin was pulled from the card. The 28-year-old Kiwi has amassed four wins in her professional career, including three before the final bell. The fight will mark her first bout in the United States.

Bell, meanwhile, made a triumphant return to the Invicta cage in September, stopping Maria Hougaard Djursaa by first-round TKO. The 26-year-old made her professional debut at Invicta FC 4, but fell short against Tamikka Brents. She also dropped a bout to the aforementioned Tweet, but has rebounded with a vengeance over the last year. The Animals MMA product has scored three straight wins, including a violent knockout of Marina Shafir last August.

Invicta FC 12 takes place from the Municipal Auditorium in Kansas City, Mo. The event will air live on UFC Fight Pass. In the night’s main event, Finnish strawweight champion Katja Kankaanpää squares off with unbeaten Brazilian Livia Renata Souza. More bouts for the event are expected to be revealed in the coming weeks.