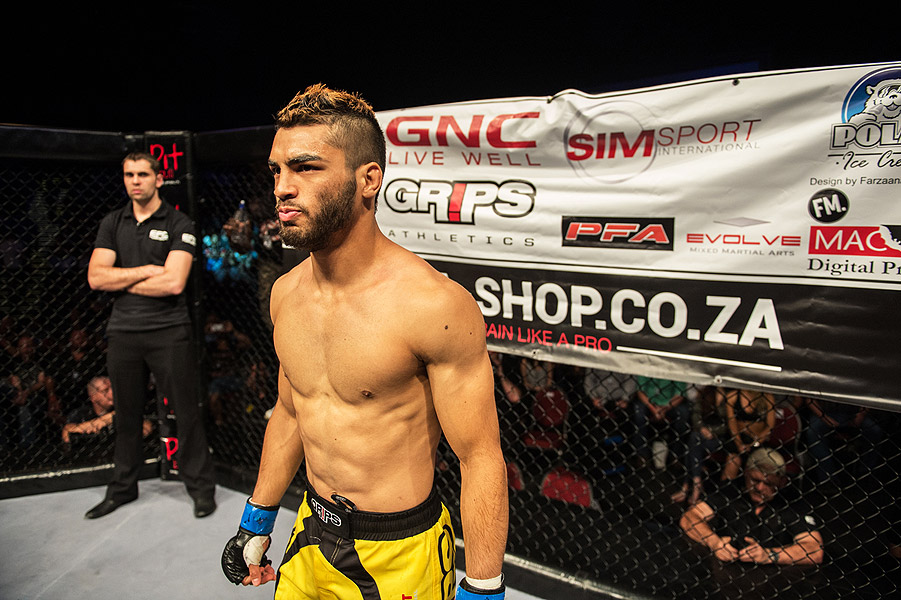 EFC’s Irshaad Sayed: Sacrificing a Title Shot for Something Bigger

Since making his Extreme Fighting Championship debut at EFC 28 on March 27, 2014, Irshaad Sayed has remained undefeated inside the Hexagon. He is currently riding a three-fight winning streak, with two first-round submissions included in his current run. The dominant victories earned him a shot at undefeated bantamweight champion Demarte Pena. The shot at the EFC bantamweight championship was due to take place later this year, in either June or July. Then, Sayed walked away from the opportunity.

That’s right. He turned down a title fight.

Sayed is a devout Muslim, and the timeline for his championship bout was not going to work because he was observing the religious practices around Ramadan in that same time period. In Sayed’s mind, he was not going to be capable of training at an elite level. Therefore, he relinquished his title fight and accepted a catchweight contest with Nkazimulo Zulu at EFC 39 instead.

After losing the EFC bantamweight title to aforementioned current kingpin Pena, Zulu dropped down to flyweight. In his first contest in his new weight division, Zulu asserted himself as a true contender at 125 pounds when he defeated Francois Groenewald by unanimous decision. Zulu could have began working his way towards the flyweight title, but now he moves up from flyweight to meet Sayed in their catchweight bout.

Sayed has put his guaranteed title shot on the back burner. Now, he simply looks to continue his winning ways inside the Hex. He may not be competing against a current bantamweight contender, but a win over the former champion is sure to help with his title aspirations, even if holding the belt isn’t in his immediate future.

“I’m not really worried, to be honest. I take it one fight at a time,” Sayed told Combat Press. “Right now, my focus is on Zulu. We are both high-level strikers, but I feel my overall MMA game surpasses him in all aspects. I’m sure both Zulu and myself will give a ‘Fight of the Night’ performance for the fans.”

There is a certain percentage of fighters who would have waited on the sidelines for their title shot. Sayed is not one of those people. He wasn’t going to let a scheduling conflict get in the way of his opportunity to fight on Africa’s biggest mixed martial arts stage.

“I took this fight, as I wanted to remain active,” Sayed admitted. “I really enjoy training alongside my other teammates on the Evolve Fight Team and, of course, I enjoy competing as well. I didn’t want to sit around and wait for a title shot.

“Every fight is important for me, regardless of the weight. Zulu is a former champion, and I feel that this could potentially be a really exciting fight between the both of us.”

Although Zulu is in his immediate future, Sayed still looks to what is in store for him at a later date if he does get the chance to meet Pena in the Hex.

“It will be greatly satisfying to be the first athlete to be able to break Pena’s undefeated streak,” Sayed proclaimed. “I believe that I have what it takes. It’s just a matter of time before that happens.”

With Sayed stepping aside from his title shot, fellow contender Cedric Doyle steps in to take Sayed’s place. For Sayed, it’s not so much about the opportunity that he is missing out on. Instead, it’s about ensuring that his career continues on the path that he wants.

“Cedric was next in line for the EFC bantamweight title, so it makes sense that he gets his shot,” Sayed explained. “There are many athletes that would’ve done the same given the situation. It’s just a matter of priorities.”

A win in his catchweight bout over a former EFC champion will extend Sayed’s current winning streak to six, with his last loss taking place in 2012. Sayed’s chances at one day fighting for the bantamweight gold can only be strengthened if he remains undefeated inside the Hex. Win or lose, Sayed’s future still looks bright. Bright as gold, even.

“I don’t think it changes much,” Sayed admitted. “I’m still heading for the EFC bantamweight title.”

Irshaad would like to thank all of his coaches and training partners on the Evolve Fight Team at Evolve MMA in Singapore. He would also like to thank Grips Athletics Africa, mma-shop.co.za, Polar Ice Cream, GNC and Simsport for their continued support. Follow Sayed on Twitter: @IrshaadSayed
Advertisement