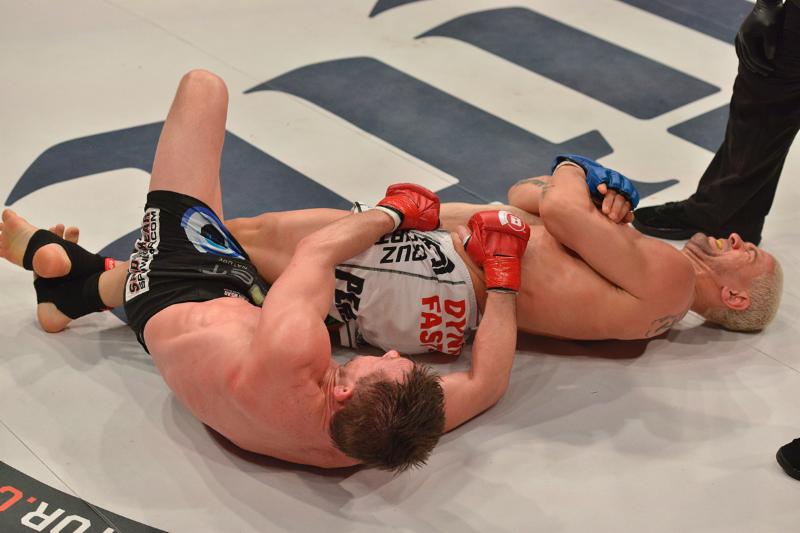 The event was headlined by a bantamweight title fight between champion Joe Warren and challenger Marcos Galvao. The pair met previously at Bellator 41 in 2011. That night, Warren, who held the featherweight title, took a controversial decision win. Since then, however, Warren had officially moved to 135 pounds and unified the bantamweight belt by defeating Galvao’s pupil Eduardo Dantas in October. Galvao, meanwhile, entered the contest riding a three-fight winning streak. His last loss came against the aforementioned Dantas via knockout.

The main card also featured a number of notable names. Former WEC fighter L.C. Davis looked to establish himself as the No. 1 contender for the bantamweight belt as he clashed with Japan’s Hideo Tokoro. Middleweight Francis Carmont made his promotional debut as he took on Brazilian Guilherme Viana. Finally, UFC and Strikeforce alum Ryan Couture locked horns with TUF: Live and RFA veteran Dakota Cochrane.

The event kicked off Friday with a preliminary card stream on Spike.com at 6:30 p.m. ET. The four-fight main card followed at 9 p.m ET on Spike.

Joe Warren met Marcos Galvao four years after stealing a decision victory, but met a different fate in the second go. Galvao and Warren traded takedowns to start the first round, but Warren made the first round dirty and used his wrestling to apply pressure to Galvao. The second round didn’t last long as Galvao and Warren went to the mat where Galvao grabbed onto one of Warren’s legs. Galvao tightened the grip and applied tremendous pressure using a kneebar on Warren. Controversy arose as Warren did scream out constituting a verbal tap that caused the referee to step in and end the fight. Warren wasn’t happy with the referee stepping in, but nonetheless, Galvao is the new Bellator bantamweight champion.

Hideo Tokoro started off quickly by throwing a flying knee at L.C. Davis to start the fight. The two fought a close first round that saw Davis land more efficiently, but Tokoro landed the more flashy shots. Tokoro hurt Davis to end the round with a quick punch. Davis landed a right hand that dropped Tokoro in the second round. Davis quickly pounced on Tokoro, but Tokoro defended with an inverted heel hook that Davis slipped out of. Tokoro dropped Davis to start the third round and quickly landed in half guard. Tokoro had Davis in multiple bad positions in the third round setting up two armbar attempts, a kimura and a headkick that hurt Davis. Davis ended the round with a tight guillotine, but Tokoro’s heart in the third round was unrivaled and Tokoro was able to finish the round. Tokoro fought a high intensity fight, but Davis was able to match it and scored the split decision victory.

Francis Carmont returned to the cage for the first time since his departure from the UFC. Carmont opened the first round as the aggressor. Guilherme Viana started off slowly and couldn’t find an answer to Carmont’s strikes. Carmont attempted a takedown near the end of the round, but Viana was able to stuff it. The second round saw a slower pace that tilted in Viana’s favor. Viana was able to press Carmont against the cage and hang on Carmont before the referee stepped in to separate the two fighters. Immediately following the separation, Carmont landed a strong right hand that backed Viana up. Carmont caught Viana against the cage, followed up with some shots and instead of going for the finish, Carmont took Viana down with a double leg. Carmont instantly was put in trouble in the third round. Carmont shot for a takedown and ended up on top. Viana was able to sweep into mount where Carmont gave up his back. Viana spent the better part of the round on Carmont’s back. After about three minutes fending off a rear-naked choke, Carmont escaped back into the guard of Viana and finished the round unscathed. Carmont snapped a three-fight losing streak with the unanimous decision victory.

Ryan Couture made his Bellator return and earned his fourth rear-naked choke victory in the process. Couture pulled a page out of his father’s playbook and pinned Dakota Cochrane. Couture worked some dirty boxing in and eventually brought the fight to the ground. Couture had a great transition to take the back of Cochrane. Couture went for a body triangle on Cochrane, easily sliding his arm underneath Cochrane’s chin and finally forcing the tap in the first round.