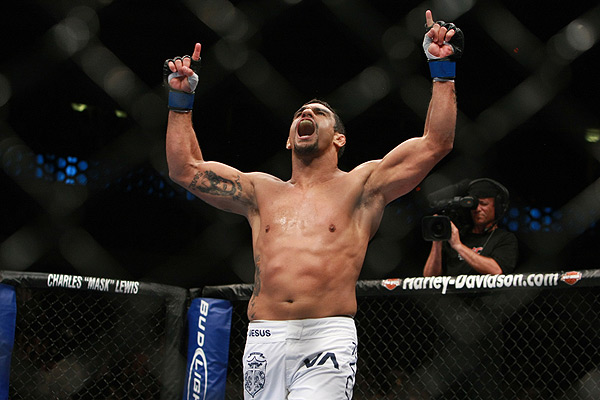 For UFC’s Vitor Belfort, the Time Really is Now and He Shouldn’t Waste It

UFC middleweight challenger Vitor Belfort recently saw his third scheduled meeting with champion Chris Weidman evaporate before his eyes when Weidman, who is dealing with fractured rib cartilage, was pulled from their UFC 184 bout, scheduled for later this month. Despite lacking the ability to move effectively, Weidman was still reportedly up for the title defense that has been over a year and a half in the making, but the bout was canceled by the UFC medical staff. With the UFC reportedly offering several replacement opponents, along with an interim middleweight title, should Belfort accept and fight as planned? Or would the better option be to wait for the true champion to heal?

As of this writing, Belfort has gone on record that he has no desire to fight for an interim middleweight championship. But is that the best option for him? While it will not be the true championship Belfort so desires, there are benefits of holding such a title. Foremost among them would be that it guarantees him the first shot at Weidman when Weidman finally returns. The distinction of “being next in line,” as they say, can change from one moment to the next, but we have yet to see an interim champ get passed over for the first crack at a returning champion. On a certain HBO drama, it is commonly said that “words are wind,” and while Belfort on his own might be passed over for, say, Ronaldo “Jacare” Souza or Yoel Romero, a gold belt around his waist would make him the only logical candidate for a title contest.

Fighting for the interim title also has the added benefit of allowing Belfort to actually, you know, fight. Belfort last fought in November 2013, a gap of nearly 15 months by the time UFC 184 rolls around. While all MMA athletes should be keenly aware of their limited time for both professional and financial success in the sport, Belfort, at age 37, should be even more concerned. It is not unrealistic to think that Belfort might only have two to three more years of elite-level competition left in him. He can ill afford to sit on the sidelines waiting, as he has done for the past year. There is nothing to guarantee when Weidman will come back, or to prevent Weidman from incurring some other type of injury. The bout has already been scheduled three times, and therefore a fourth reschedule should not be ruled out.

Regarding Belfort’s window of opportunity, it should also be noted that if he felt the need to use performance-enhancing drugs in years past, what does that say about the confidence he has in his abilities as he ages? Belfort has twice tested positive for PEDs in his career, the second time being as recent as February 2014. He is clearly attempting to keep his window pried open by any means necessary, and sitting around waiting for an as-yet-to-be-scheduled title fight with Weidman should be the last thing he wants to do.

As the UFC is so fond of telling us lately, the time is now. Belfort needs to take every opportunity given to him, most importantly a UFC middleweight interim title shot. Assuming he can win and hold on to such a belt, it is the only thing that will guarantee a shot at the legitimate champion upon Weidman’s return. Belfort quite simply cannot afford to wait for anything less than a concrete opportunity, and the interim title is that opportunity. Time is running out on Belfort’s career, and sitting on the bench for another four to six months should not be even be a consideration. An interim title win over Souza, Romero or even Gegard Mousasi would be a perfectly credible win, and it would allow Belfort to step back in the cage for the first time in over a year. Belfort’s priorities right now should be to shake off ring rust and prove himself as a clean athlete. He shouldn’t be worried about whether the title has the word “interim” in front of it.