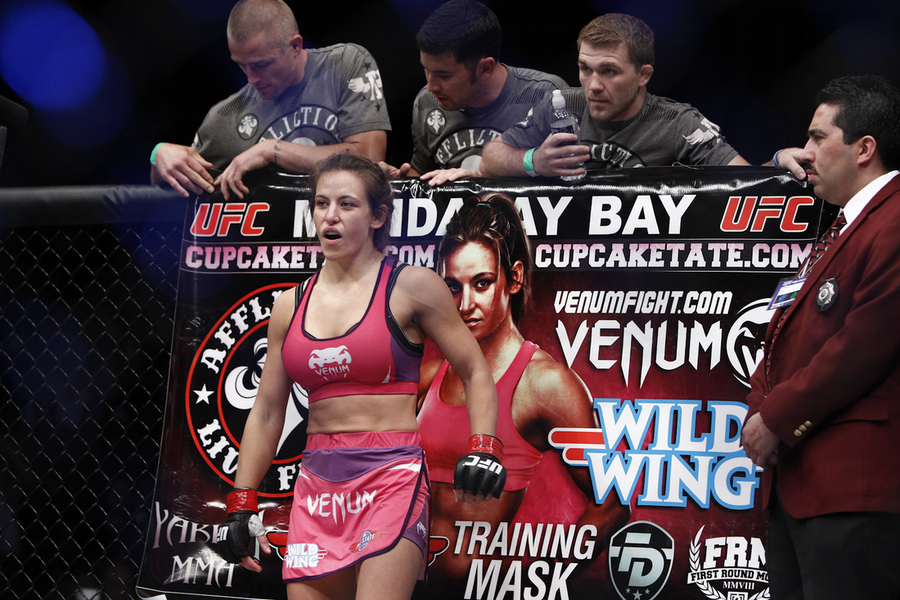 With the women’s lightweight division, you shouldn’t expect huge moves every month. It’s the least inhabited of the divisions Combat Press covers and fights come at a slower pace. That said, there were two bouts in January that contained ranked lightweights. Jozette Cotton moved up to 170 pounds for a one-off fight to defeat Kilastina Makihele. The unanimous decision continues to prove that the undefeated Cotton may be one of the best in the heavier weight classes, if not the best. The biggest move of the month saw unranked Charlene Donahue upend Jessica Halverson to storm into the rankings. It was an upset that shocked many and put Donahue on the map at 155. February’s action includes top-ranked lightweight Charmaine Tweet moving back to 145 pounds in an attempt to take Cristiane “Cyborg” Justino down. If you’re a fan of the lightweight ladies, be patient. It’s possible Invicta will start incorporating more 155-pound fights eventually.

It was a quiet month for the featherweight division, but it’s just the quiet before the storm. With a victory over Lacie Jackson in January, Gabrielle Holloway solidified her spot in the rankings. February brings the aforementioned storm with some big fights in the division. Cristiane “Cyborg” Justino will defend her Invicta featherweight championship against Charmaine Tweet on the same weekend as UFC 184. It is speculated that a win that weekend for both her and Ronda Rousey, who is set to defend her bantamweight title against Cat Zingano, could set up a meeting later this year. Also, two top featherweights will collide in Bellator when Brazilian grappling specialist Talita Nogueira makes her American debut opposite Canadian star Julia Budd. Needless to say, the top of the featherweight rankings will be in the spotlight this month.

Speaking of quiet months, the most popular weight class in women’s MMA was not entirely busy in the month of January either. However, Miesha Tate was able to get back into the top three with an impressive decision victory over fellow top contender Sara McMann. Tate recovered after getting rocked on the feet early and out-grappled the Olympic-caliber wrestler. Though she has two losses to top dog Ronda Rousey, Tate appears to be Rousey’s greatest opponent to date. Now, she is gunning toward a third match with the champ. February will be a crucial month in this division. Rousey defends her title against Cat Zingano in the main event of UFC 184. It is a huge fight, with Zingano standing as another opponent fans think can match Rousey on the ground. In the co-headliner feature, world-class boxer Holly Holm makes her promotional debut opposite Raquel Pennington in a bout that will test Holm’s prospects in the UFC waters. The champion boxer that has been unstoppable since entering into MMA competition. Jessica Andrade also returns to action in February. She looks to continue her meteoric rise against proven challenger Marion Reneau, whose UFC debut was incredibly impressive in the way she dismantled Alexis Dufresne. Strap in for a big month in the 135-pound division.

Do these rankings look the same? That shouldn’t be surprising, as the flyweight division found itself in hibernation to start off 2015. Outside of Brenda Gonzales, who scored a win in her return to the division and lingers just outside of the top 15, there wasn’t much of note happening in the flyweight division. In February, top-ranked 125er DeAnna Bennett has her eyes set on the greener pastures of the 115-pound division. She takes on Lynn Alvarez at Invicta FC 11, potentially looking to score a contract with the UFC in the process.

Like the flyweight division, the strawweight division was all quiet on the western front. That’s because December showcased most of the ranked fighters in the division. They are now looking for a quick break before getting back to the action. While they rest up, two additional top strawweights will throw down in Poland in February. Karolina Kowalkiewicz looks to continue her impressive run up the top against top Brazilian Kalindra Faria in a bout for KSW gold. Stateside, Mizuki Inoue will look to get back into the win column when she takes on surging Mexican striker Alexa Grasso, who is fringing the top 15. The pair meet under the Invicta banner. Those two fights should suffice fans’ appetite for 115-pound violence, as well as shape up the rankings in a big way.

Following the trend of most of the other weight classes in an uneventful January, none of the top-15 atomweights were in action, leaving the rankings a carbon copy of the month before. However, February should be a big month for this division. Satako Shinashi looks to continue her winning ways since returning to MMA when she meets Emi Yamamoto in Japan. Also in “The Land of the Rising Sun,” there will be an atomweight tournament under the Deep Jewels banner. Though match-ups are yet to be set, Mina Kurobe will be involved, as well as other women on the fringe of breaking into the 105-pound rankings. Don’t be surprised to see some new faces in the top 15 next month.