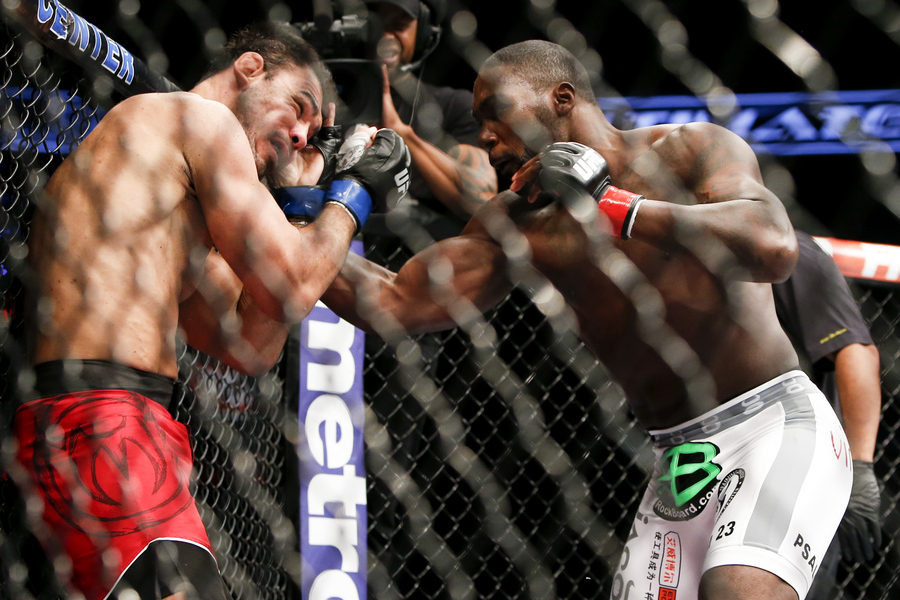 Anthony ‘Rumble’ Johnson Can Dethrone Jon Jones, But Don’t Count Out the Champion

It took all of two minutes and 15 seconds for Anthony “Rumble” Johnson to completely shake up the UFC’s light heavyweight division on Saturday night by knocking out Alexander Gustafsson.

The undisputed No. 1 contender now has a date with destiny. He’s next in line to challenge one of the pound-for-pound best fighters in MMA today, UFC light heavyweight champion Jon Jones. It’s a fight that Johnson should enter with an all-time high level of confidence.

At one point in time, Johnson was among the top contenders in the UFC’s welterweight division. However, his string of weight-cutting issues, combined with poor performances, led to his release from the UFC in 2012. This would prove to be Johnson’s turning point, something he mentioned in the leadup to his showdown with Gustafsson.

“After the Vitor Belfort fight, I stopped listening to the world and started to listen to what I needed to listen to. I think I was very selfish with the Vitor fight, and I was just young, dumb and didn’t want to pay attention. I thought I knew it all… Obviously I didn’t,” said Johnson.

Since the Belfort loss at UFC 142, Johnson has yet to leave a cage without having his hand raised. His winning streak currently stands at nine victories, with six of them ending by way of knockout or TKO. Rumble virtually restored his stock with MMA fans by dominating talent on the regional level initially, but also on the national level in the World Series of Fighting promotion. Since returning to the UFC’s active roster, he has done nothing but impress in every way possible.

Johnson’s return fight was against former NCAA Division I wrestling champion Phil Davis. Rumble negated Davis’s takedown attempts and battered the former top contender, winning a unanimous decision in the process. He followed up the impressive victory with another, as he completely laid waste to the remnants of Antonio Rogerio Nogueira. Yes, Rumble was expected to win against the Brazilian, but nobody expected the fight to last just 44 seconds.

Now, Johnson has added a victory over the consensus top contender (pre-UFC on Fox 14) to his accomplishments. Rumble’s run has been extremely impressive, and the fact that he’s at this level despite his earlier struggles speaks volumes about his mental toughness. However, can he be the man to dethrone Jones?

The relatively easy win against Gustafsson is a huge feather in Rumble’s cap. The Swede shares similar measurements with Jones in terms of height and reach, but Johnson was able to negate those with relative ease. Gustafsson is also widely believed to have better overall footwork than Jones, yet Johnson closed the distance well and landed power shots at will.

With that said, Gustafsson’s attack is primarily based upon his boxing skill set, but the Swede failed to implement the jab, a tall fighter’s best weapon. With virtually nothing stopping Rumble’s advances, the Blackzilians fighter could move forward without having to worry about anything coming back at him. Jones isn’t going to let that happen.

One can assume with almost certainty that Jones will look to employ his infamous oblique kicks and utilize his “Thai block” to protect his chin and keep a lead hand in Johnson’s face. Rumble has a history of having issues with eye pokes — it once cost him a fight in 2008 — and the champion has a knack for leaving his fingers extended, so Johnson will have to be careful as he navigates his way inside.

There’s also the wrestling ability of Jones. Johnson didn’t have to worry about wrestling and takedowns in his last two fights. Even NCAA champ Davis has struggled to implement his wrestling prowess in MMA, so one could say Rumble hasn’t had to deal with a real threat of going to the mat since returning to the UFC. Jones may not be blessed with a power double, but he is extremely crafty at utilizing the clinch for throws and trips. Furthermore, the champ was able to out-wrestle perhaps the most decorated wrestler in the division, Daniel Cormier.

Jones knows he can go through five tough rounds and still emerge victorious. Rumble, meanwhile, has yet to go five rounds in his entire career and gassed out badly in his WSOF 2 contest with former UFC heavyweight champion Andrei Arlovski. Johnson has had cardio issues in the past, but that was also when he was competing at a weight class well below the one for which he is best suited. Exhibiting a much more deliberate pace in recent years, Johnson has finally learned to throw his power shots with efficiency over volume. The old Rumble would have spammed punches and kicks with reckless abandon once he had Gustafsson hurt on Saturday night. Instead, the new Rumble walked the Swede down and used a measured approach to finish the fight.

Just as Johnson has grown as a fighter, so too has Jones. Each fight looks different than his previous outing. The champion has routinely unveiled new techniques in his title contests. Against Glover Teixeira, he used a shoulder crank to injure the Brazilian and superior hand-fighting to batter Teixeira in the clinch. Against Chael Sonnen, Jones showed that he can be an effective fighter moving forward, along with fighting at distance. He showed a submission game against Belfort and Lyoto Machida and showcased his oblique kicks against Quinton “Rampage” Jackson. Each title defense presents a riddle for Jones and his coaching team to solve. Each time they came up with a viable solution.

One thing is working in Rumble’s favor, though. Jones has proven to be hittable in his last few bouts. According to Fight Metric, the champ was hit 58 times against Cormier, 53 times against Teixeira and 110 times against Gustafsson. While being hit an average of 10 times per round in his last two bouts is nothing to worry about, Jones cannot afford to eat as many strikes against someone with the power of Johnson.

The bottom line is quite obvious. How many times have fans claimed the next challenger as the guy to dethrone the seemingly unbeatable champion? Jones has faced nearly every type of fighter there is to compete against. He has beaten them all. Rumble does present a new challenge. He is by far the quickest, most athletic fighter Jones will face. There’s also the issues Jones has faced outside of fighting, which could impact his training regimen. However, if Jones comes into his showdown with Rumble with a clear mind, and if he is focused on the task at hand, it’s hard for anyone to bet against the champion. Rumble is an intriguing challenger who certainly has the skills to dethrone the king of the 205-pounders, but that’s the same thing we have said about everyone else who has faced Jones.