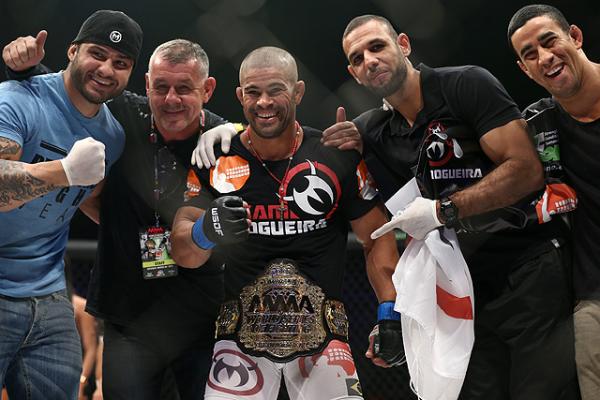 World Series of Fighting adds to the MMA excitement this weekend with a Saturday night card containing two title fights. On Dec. 13, the WSOF heads to the McClellan Conference Center in Sacramento, Calif., for WSOF 16.

UFC veterans Rousimar Palhares and Jon Fitch headline the card. Palhares submitted Steve Carl at WSOF 9 to win the welterweight belt, and he will make his first defense against fellow grappler Fitch.

In the co-main event, featherweight champion Rick Glenn takes on Team Alpha Male’s Lance Palmer. Glenn is also defending his belt for the first time after he defeated Georgi Karakhanyan at WSOF 10. This will be Palmer’s second title shot under the WSOF banner.

WSOF 16 starts at 7 p.m. ET with an eight-fight preliminary card on NBCSports.com. The five-fight main card begins on the NBC Sports Network at 9 p.m. ET.

The welterweight championship will be on the line when UFC veterans Rousimar Palhares and Jon Fitch meet in the evening’s main event.

Fitch and Palhares excel in one area: grappling. Fitch is known as more of a lay-and-pray fighter who mainly wins his fights on the judges’ scorecards. Fitch is very good at controlling his opponents on the ground and defending against submissions. Fitch has won his last two fights for the WSOF after quickly dropping his debut to Josh Burkman by first-round submission.

Palhares is also a skilled grappler, but he is mostly known for his ability to secure leg locks. He can and will submit opponents if they leave their leg open for the taking. The 34-year-old showed just that at WSOF 9 when he submitted Steve Carl with an inverted heel hook to win the welterweight title. He has also recorded numerous submissions by kneebar or heel hook in the UFC.

These two will not trade on the feet for long, and it’s difficult to give either fighter a significant edge in that department. This fight will hit the mat, and Palhares will submit Fitch to retain his welterweight title.

Glenn is no stranger to great camps, either. He fights out of the highly regarded Roufusport gym. Glenn’s great kickboxing skills have led him to eight victories, including a win in his WSOF debut against Alexandre Pimentel. Glenn will enjoy the size advantage in this fight. He is six inches taller than Palmer and will benefit from a comfortable reach advantage with his lanky limbs.

Glenn’s superior height and reach will make it difficult for Palmer to stick with what he knows and what could be his biggest advantage—his wrestling. Palmer is a four-time NCAA Division I All-American wrestler out of Ohio State.

Glenn is going to create a different pace here that Palmer may not be able to handle. Glenn is going to be aggressive with his striking and use that reach to his advantage. Glenn takes the fight by TKO in the third frame.

Sheymon Moraes looks to continue his unbeaten streak against Gabriel Solorio, but Solorio is a tough out here for Moraes.

Solorio fought Shawn Albrecht around this time last year in his WSOF debut and took home the unanimous decision victory. That victory was a hard-fought win and it put Solorio’s toughness on display. Solorio bounced back after a first round that saw him almost get submitted with a rear-naked choke. Solorio survived despite his deficiencies in the grappling department (six of Solorio’s seven losses have come by submission). Luckily for Solorio, Moraes is a striker and not a grappler.

This fight will most likely be contested on the feet. Moraes is a Muay Thai fighter, which means he has a wide-ranging arsenal of strikes. The 24-year-old ended his last fight with an elbow that earned him the clean knockout victory.

Moraes is too good of a striker to bet against here. It will be the first time in his MMA career he travels outside of Brazil, but he’ll do just fine. Moraes will earn the knockout victory.

Brenson Hansen will look to end Josh Berkovic’s unbeaten streak in the second fight of the night.

Hansen opened up his WSOF career with an amazing flying-knee knockout against Tom Marcellino at WSOF 2. Since then, Hansen has gone 2-1 with all three fights going to decision. Hansen beat Boostayre Nefarios in his last fight in March at WSOF 9. The 25-year-old will also have the added benefit of training out of Xtreme Couture. Hansen is a good striker and likes to trade on the feet. The flying-knee knockout is the lone finish on his record, though, so expect a full three rounds out of Hansen over a finish.

Berkovic, on the other hand, has four finishes on his record—three by submission and one by knockout. He hasn’t been out of the first round in his past three fights. Berkovic’s last fight, which came against Anthony Avila, is his only outing against an opponent whose record is above the .500 mark.

This will be a great fight between two prospects, but it’s Hansen who should emerge with the unanimous nod.

Lewis Gonzalez is looking to get back in the win column following his first-round knockout loss in August. UFC veteran Justin Buchholz stands in his way.

Gonzalez is most likely going to look to use his wrestling here and stay away from the stand-up game. Gonzalez is a two-time high school state champion wrestler and certainly has the skills to bring this fight to the mat. The 27-year-old has defeated Antonio McKee and Justin Baesman in his career, and those remain his two most notable wins.

Buchholz is another veteran who can be added to Gonzalez’s list if he is not careful. Buchholz is coming off a year-long layoff since he lost by split decision to Clay Collard. The 31-year-old has gone 6-3 since leaving the UFC in 2010. His strengths lie in his jiu-jitsu and in his striking, which has provided him with seven wins by some form of knockout.

Buchholz will need to stick with his striking in this fight. He comes in with a lot of energy in his fights and his striking arsenal seems endless. Buchholz’s 2011 knockout of Steve Lopez still sticks out as a highlight-reel moment three years later. It was a beautiful front-kick knockout.

Gonzalez’s wrestling cannot be ignored, though. He probably learned his lesson from his last fight and will avoid having a second straight knockout end his night early. Gonzalez by unanimous decision.