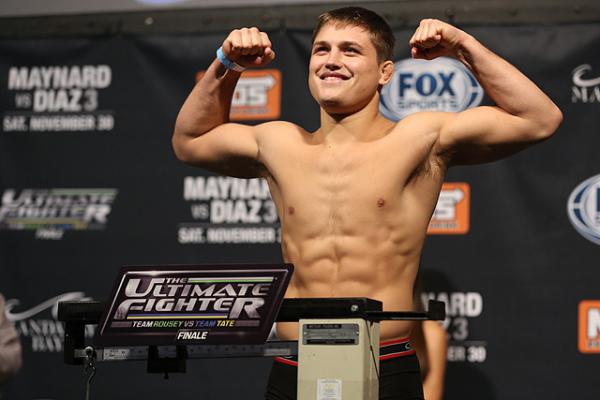 What does the average person accomplish by the time they’re 26 years old? Master of the beer bong? College degree? Skip college to start a business or maybe a first job? Even if a kid trucks through college in four years, it would be a push to even have five years of work experience by age 26.

Of course, there are plenty of accomplishments that can be fit into the short time period between the ages of 18 and 26, but UFC combatant Drew Dober has set that bar extremely high.

Dober made his amateur MMA debut in 2006, shortly before his 18th birthday. He was 17 years old when he stepped into the cage and knocked out Shain Castillo in the first round of their Omaha Fight Club bout. For the sixth fight of his amateur career, he knocked out Lumumba Sayers at 16 seconds of their Strikeforce bout.

The Nebraska native finished his amateur career before his 21st birthday with a 9-0 record and an amateur title, and he jumped right into the pro arena. By the age most kids graduate from college, Dober was 6-2 as a pro, having finished his opponent in all of his wins. His only two losses were by decision. At 5-foot-8, he is by no means a tall lightweight, but the one thing all of his opponents will attest to is that he’s tough as nails.

After two more wins and one loss (the first and only time he has ever been stopped), Dober decided to try his hand at The Ultimate Fighter: Live. He dropped a one-round decision to Daron Cruickshank in the fight to make it into the house, but his name was getting out there at the young age of 23.

The loss to Cruickshank was a tough one, but Dober knew he was young and had plenty of time to earn his spot on the UFC roster. That’s exactly what he did. After six more wins, including one for the Prize Fighting Championship lightweight title, and one loss (to current reigning Bellator lightweight champ Will Brooks), Dober got the call from the UFC brass.

In his Octagon debut, the youngster walked away with a decision loss. However, he fought outside of his weight class and walked through Sean Spencer’s best shots like a cyborg from The Terminator. Spencer threw everything he had at the much smaller Dober, and the kid kept coming as if unfazed. In his second UFC bout, he flew across the pond to fight Nick Hein on his home turf. While he again walked away on the losing end of the affair, it was a great learning experience.

“I was in Germany, fighting a German, and I shouldn’t have left it to the judges,” Dober told Combat Press. “I feel like I put on an exciting fight. I kept on moving forward. Obviously, there were some things I could’ve done differently to get the win. I think I needed to fight a little harder for the finish, rather than trying to win by points.”

For his last fight, Dober spent some of his training camp at the Elevation Fight Team in Denver. After the fight, he made the move out to Denver to permanently train with one of the best up-and-coming teams in the game. His next fight is tomorrow night at UFC on Fox 13, which takes place in Phoenix.

“Training’s going great — just getting punched and punching others,” said Dober. “I’ve got great training partners that beat the crap out of me every day. I feel like I’m improving.”

“I told the UFC I was ready for a fight,” explained Dober. “I moved out here, got settled in, and started training hard. I asked the UFC for a fight, and they shot me the offer of Jamie Varner in September, and I gladly accepted.”

Varner is a huge step up in competition for Dober. The polarizing former WEC lightweight champ is on a three-fight skid, left his old team to train exclusively at his own gym, Impact MMA, and badly needs a victory to keep his job. The Nebraska transplant knows Varner’s back is against the wall, but he also knows that can make him vulnerable.

“I’ve seen him perform at his best, and I’ve seen him perform not like he should,” Dober said. “So, Varner’s obviously got his ups and downs, so I’m preparing for the best Jamie Varner possible. I’m super excited about this match-up, because I know Jamie will stand there and trade. He’s an emotional brawler. He comes forward. He doesn’t try to outpoint people instead of the finish, so this has ‘Fight of the Night’ written all over it.”

Varner and Dober will enter the Octagon pretty evenly matched up from a size perspective, but Varner is clearly the more experienced fighter. He has faced some of the best lightweights in the world, and he has picked up wins over guys like Donald Cerrone, Edson Barboza and Rob McCullough. However, Varner’s last fight ended in a pretty nasty ankle injury.

“The biggest challenge is that he’s an explosive and athletic guy that goes for the kill,” Dober said. “I need to weather the storm or just implement my storm before he gets his going. I think the first round will be the toughest, but I think, as the fight goes on, it’s going to complement me more.

“I feel like worrying about his two hands isn’t as bad as worrying about the eight limbs of Muay Thai. But, he throws hard and he boxes well, so it’s really dangerous even though he doesn’t kick or knee much. But, who knows? He might come into this fight kicking or throwing elbows. You never know in MMA.”

As young as he is, Dober knows that, even with his own contract on the line, he has a lot less to lose than Varner. That being said, the youngster will come out swinging for the fences, as he has plenty of career left to recover from a loss. A dazzling win will only shore up his current situation as he builds a name for himself in the Octagon. Fortunately, he has a great support system in Denver that has helped him with a smooth transition.

“I’m still Seth Daniels’s basement troll,” Dober admitted. “He’s helping me out a ton, and I’m really privileged to have someone so amazing help me out and make my transition to Colorado easier. Out here, the weather seems to be gorgeous. Of course, the scenery’s gorgeous. I’m training with high-level caliber guys, so it couldn’t be more perfect.”

Tomorrow night, Dober will face the biggest test of his career, as Varner is more experienced and has everything to lose. The move to Denver has really boosted the quality of Dober’s training. He looks forward to reaping the rewards of his hard work. A win over Varner would be another amazing accomplishment in his young career.

“This time, I’m coming in with new abilities, more conditioning [and] more strength. The change I’ve made in my training camp is really going to show. It will be the same tenacity with a lot more talent.”