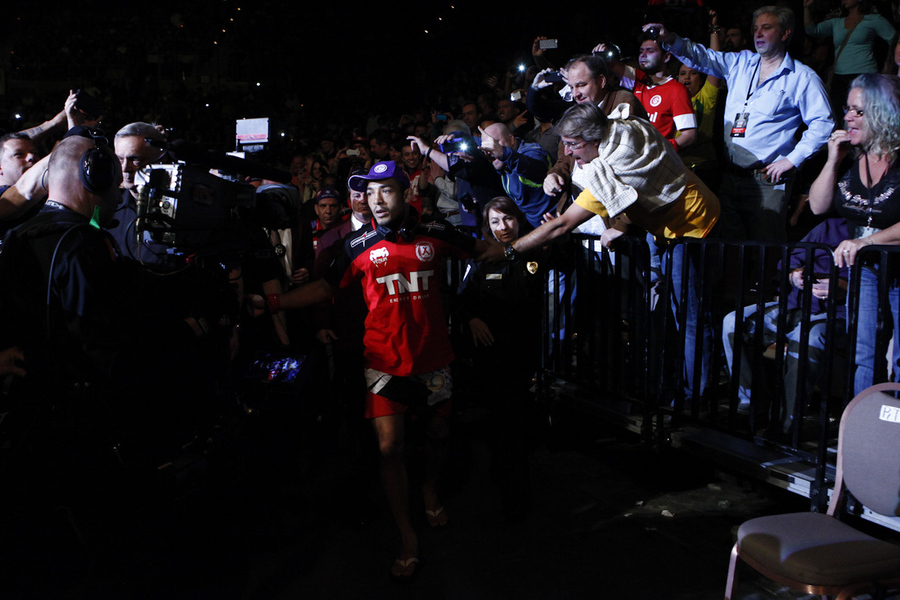 On Saturday, Oct. 25, the UFC hosted UFC 179: Aldo vs. Mendes 2 from the Maracanazinho Gymnasium in Rio de Janeiro, Brazil.

In the main event of the evening, featherweight champion Jose Aldo defended his 145-pound title against challenger Chad Mendes in a rematch of their UFC 142 clash which Aldo won via first-round knockout. Since then, Aldo had defended his belt three times. The Brazilian edged former lightweight champion Frankie Edgar and Ricardo Lamas by decision, while stopping Chan Sung Jung by strikes. Mendes, meanwhile, had been red-hot. The Team Alpha Male product rebounded from the first loss of his career to reel off five straight wins, including four by knockout.

The co-main event featured a pair of light heavyweights looking to get back in the win column as Brazil’s Glover Teixeira locked horns with Phil Davis. Both fighters had been out of action since UFC 172 in April when Teixeira was battered by champion Jon Jones for five rounds, while Davis was outclassed by Anthony “Rumble” Johnson.

UFC featherweight champion Jose Aldo faced the toughest test of his career, but retained his title with a unanimous decision win over Chad Mendes. The rematch began with Mendes pressuring the champion and looking to land his right hand. Mendes scored with kicks, but Aldo countered with combinations. A left hand from Mendes sent Aldo to the mat, but he quickly recovered. An eye poke from Mendes woke up Aldo, as the champion scored a violent combination late in the opening round. Aldo mounted Mendes briefly and delivered a combination as the bell sounded. Round two was very close, as the pair traded shots on the feet, but Aldo’s jab was the difference. Round three was a back-and-forth affair as both fighters came close to finishing. Mendes rocked Aldo with an uppercut and a left hook, but as he ran forward Aldo countered with a massive right hand that sent Mendes crashing to the mat. Aldo then looked to finish, but the round expired. Mendes found his rhythm in round four, repeatedly backing up the champion with punches. With the fight potentially in the balance, Mendes opened the final round with a takedown, but he was unable to hold the Brazilian down. When the fight returned to the feet, Aldo repeatedly landed combinations. The pair traded wildly late, but the champion’s striking prowess was the difference. All three judges scored the fight in Aldo’s favor.

Light heavyweight Phil Davis sent a statement to the rest of the 205-pound division with a dominant decision win over former title challenger Glover Teixeira. The Brazilian Teixeira stalked Davis early, but it wasn’t long before Davis shot for a takedown. Once on the mat, Davis took control. He was able to keep Teixeira on his back and deliver a steady stream of right hands. In round two, Teixeira landed a solid combination, but looked for a guillotine choke that allowed Davis to gain top position yet again. Davis chained his wrestling to prevent the Brazilian from getting back to his feet. It was more of the same in the final stanza, as Davis even put Teixeira in a cradle at one point. When the final bell sounded, there was no doubt that Davis had won.

Brazilian light heavyweight Fabio Maldonado gave the crowd something to cheer about with a come-from-behind TKO win over Dutchman Hans Stringer. Stringer put the former boxer on his back just seconds into the fight. Maldonado struggled to get back to his feet and absorbed numerous elbows from Stringer. In round two, Stringer again scored with a takedown, but he was unable to keep Maldonado pinned on the mat. Maldonado managed to escape to his feet and push Stringer to the canvas. Once on top, Maldonado flurried with punches and elbows, forcing the referee to waive off the bout.

It wasn’t pretty, but featherweight Darren Elkins was able to stifle the Muay Thai attack of Lucas Martins and claim a split decision win. Elkins latched onto a single-leg takedown and put Martins on his back immediately. The Brazilian bounced back to his feet, but Elkins kept the pressure on. Elkins used his wrestling and pressure to frustrate Martins throughout. The majority of round two was spent in the clinch along the fence, with Elkins scoring with short shots. Martins connected with a head kick late in the frame that rocked Elkins, but the American survived. Round three saw Martins land knees early, but Elkins continued to force the fight against the fence, earning the win on the scorecards.

Lightweight Beneil Dariush handed Brazilian Carlos Diego Ferreira the first loss of his career with a unanimous decision win. From the opening bell, it was apparent that Dariush was the more comfortable fighter on the feet. He score with multiple leg kicks to keep Ferreira from coming forward. When Ferreira did close the distance and look for a takedown, it was Dariush that landed on top. Dariush continued to score on the feet in the middle frame before again putting Ferreira on the mat. Ferreira came out firing in the final round, but Dariush neutralized that with another takedown and was able to smother the Brazilian until the final horn.

Welterweight Neil Magny earned his fifth straight win, all in 2014, to tie a UFC record. The Colorado fighter started slowly, but battered Brazilian William “Patolino” Macario to earn a third-round TKO. The opening round was close, as both fighters looked to find their range and failed to earn takedowns. Magny’s output increased with each round and he scored a takedown late in round two. Once on the ground, Magny moved to mount and rained punches. Patolino survived the second frame, but in round three, Magny’s assault from the top was too much.

In his lightweight debut, Brazil’s Yan Cabral showcased a superior ground game to submit Naoyuki Kotani with a second-round rear-naked choke. Cabral opened up aggressive on the feet and looked for a takedown. Kotani was able to reverse the takedown attempt and landed on top. Cabral escaped back to his feet and capitalized on a slip from Kotani to gain the top position. In round two, Cabral was able to drag Kotani to the mat again and take his back with both hooks. The Brazilian sunk in the choke and Kotani tapped.

Brazil’s Wilson Reis made Scott Jorgensen pay for missing the flyweight limit, submitting the American with an arm-triangle in the first round. Jorgensen dropped Reis early with a right hand, but Reis recovered. Reis looked for a takedown, but Jorgensen was able to keep the fight upright. A thundering body kick from Reis hurt Jorgensen, allowing Reis to take the fight to the ground. He flurried with punches before slapping on an arm-triangle choke and forcing Jorgensen to submit.

Featherweight Andre Fili returned to the win column, scoring a unanimous decision win over Brazilan Felipe Arantes. The pair traded wildly on the feet early before putting on a brilliant display of ground transitions. Arantes was able to mount Fili briefly in round one and opened up a big cut on Fili with an elbow. Fili was unfazed and scored with multiple takedowns in each round. Arantes was game, however, as he frequently reversed positions on the Team Alpha Male product. When it was all said and done, Fili had done enough to earn the win on the scorecards.

Brazilian Gilbert Burns electrified the Rio crowd with a first-round submission of newcomer Christos Giagos. Giagos opened with a fluid combination, but Burns changed levels and took the fight to the mat. Burns patiently passed the mount and then took the back of Giagos. Giagos tried to stand escape, but as the first round expired, Burns transitioned to an armbar and coerced a tap.

Lightweight Tony Martin earned his first Octagon victory, submitting Brazilian Jiu-Jitsu black belt Fabricio Camoes with a first-round kimura. After a feeling out process on the feet, Martin scored with a big takedown and landed in the half guard of Camoes. Camoes looked for a kimura from his back, but Martin flipped the table on the Brazilian and attacked his left arm. Camoes fought off the submission for as long as he could, but eventually was forced to tap.