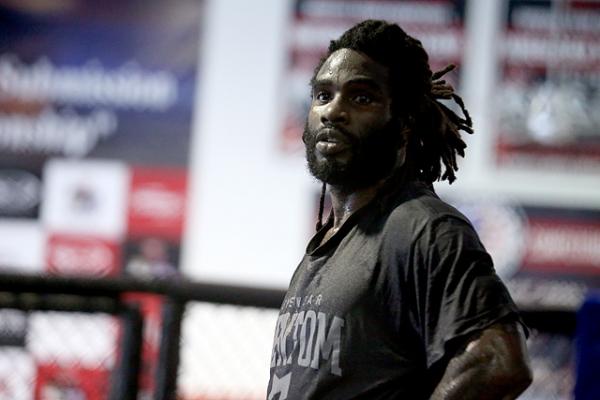 On Oct. 3, Bellator enters its last month of weekly cards when Bellator 127 rolls into Temecula, Calif., at the Pechanga Resort and Casino. Bellator 127 has a four-fight main card headlined by a non-title fight between two top featherweights.

Daniel Straus will headline Bellator 127 in his first fight since losing in the first defense of his featherweight title. He takes on Strikeforce veteran Justin Wilcox.

In the co-main event, an injury has forced Marius Zaromskis off the card and Fernando Gonzalez has stepped in to replace the former Dream champion. On a week’s notice, Gonzalez will face former UFC fighter Karo Parisyan.

The card will be rounded out by one fight at middleweight and another at bantamweight. In the bantamweight battle, Rob Emerson takes on Rafael Silva. In the middleweight fight, Kendall Grove takes on former Bellator light heavyweight champion Christian M’Pumbu.

Daniel Straus looks to rebound after his short-lived reign as Bellator featherweight champion was brought to an end by Pat Curran. Justin Wilcox will be his opponent. Both men will attempt to capitalize on the opportunity at hand and make a case for a shot at the featherweight strap now held by Patricio “Pitbull” Freire.

Straus uses a grinding fight style to wear his opponents down. The 30-year-old also does a good job using his strikes to set up the takedown. He beat Curran in their first title fight by neutralizing Curran, but he seemed to stray away from that plan in the second fight and couldn’t retain the belt against a hungry Curran.

If we learned anything after Bellator 126, it’s that you really can’t count out anybody, no matter who the favorite is or how good one fighter may be. Wilcox is a tough out. He has a strong wrestling base, a trait he shares with Straus. Wilcox sets up his takedowns nicely and is more than capable of bringing the fight to the ground. In comparing their wrestling ability, I would give the edge to Straus, who has dominated fights on the ground.

This fight is going to go to the guy who can capture the first round and keep the pace for the rest of the fight. Straus is that guy. He is coming off two consecutive title fights, but he’s now going back to a three-round affair. That will certainly help him keep up a high tempo for the duration of the bout.

With Fernando Gonzalez replacing Marius Zaromskis on a little more than a week’s notice, this welterweight contest has become the most intriguing fight on the bill. Gonzalez steps in to meet former UFC fighter Karo Parisyan. Parisyan will look to extend his winning streak to three fights here and stake further claim to his spot in line for a title bid within the Bellator welterweight division.

Parisyan made short work of Phil Baroni in his last fight, knocking out Baroni in the first round. Parisyan is known for his judo, but he used his striking to defeat Baroni. The 31-year-old was able to soften Baroni before finally getting the “New York Bad Ass” into his range and finishing the fight with a TKO. With his striking, Parisyan is a dangerous man in the first round. If Parisyan finally has his cardio in check, he will be a legit threat throughout the fight.

Gonzalez is looking to cause a second straight upset over a big name. At Bellator 122, he topped Karl Amoussou via decision. Gonzalez tested Amoussou significantly in that fight by being quicker, landing big shots and generally outlasting his opponent.

Parisyan isn’t a guy known for his cardio, and he will certainly have to look out if Gonzalez uses the same plan he implemented against Amoussou. Gonzalez showed he can wear out the best in the division, and Parisyan hasn’t shown in previous fights that he can consistently keep it together over three rounds.

This is really a big trap fight for Parisyan, who could make something of himself at 170 pounds with a win. Gonzalez doesn’t have the big name of many of the opponents on Parisyan’s resume, so Parisyan could easily overlook him.

Gonzalez has good hands, and Parisyan’s trouble with heavy hitters is well documented. Parisyan’s experience is too much to overlook, though, and he really is a skilled fighter when he wants to be. Parisyan by TKO in the second round.

Rafael Silva will look to get back into winning form when he fights Rob Emerson on the second fight of the main card.

Silva largely relies on his grappling ability to be successful. Joe Warren beat Silva at Bellator 118 when the interim bantamweight belt was on the line and never really let Silva’s game get going that night. Silva has shown he can be the better grappler when facing other fighters known for their grappling. The 29-year-old was able to outwrestle Anthony Leone at Bellator 102 and even submitted Rodrigo Lima at Bellator 97. He just bit off more than he could chew against Warren. Silva does have decent striking, but to rely on that would be a mistake. His grappling skills are what will win him not only this fight, but any fight he takes.

Emerson is riding a long winning streak. He has won five straight fights since his loss to Justin Salas in 2011. Emerson is 7-1 since leaving the UFC in 2010. He has good hands, and his game plan will be to use them in this fight.

Emerson has improved his grappling in recent fights, but Silva is clearly better on the mat. Silva has nine submission victories, including two under the Bellator banner. Going to the ground with Silva could be a nightmare for Emerson.

Emerson isn’t an easy guy to finish by any stretch of the imagination. In fact, through his 12-year career, he has only been stopped once, in a submission loss to Kurt Pellegrino inside the UFC’s Octagon.

Silva will take Emerson down and overwhelm him on the mat en route to the unanimous decision victory.

Former Bellator light heavyweight champion Christian M’Pumbu will fight once again in 2014 when he takes on Kendall Grove.

It doesn’t feel like that long ago when M’Pumbu was champion and had the potential to be one of the top guys on Bellator’s roster. But in 2011, Travis Wiuff dominated M’Pumbu on the ground and wrestled the life out of M’Pumbu’s career. M’Pumbu has only fought twice since then, and both fights were losses to top Bellator talent in Quinton “Rampage” Jackson and Attila Vegh.

This will be M’Pumbu’s first fight at 185 pounds. That is probably a better weight class for the 37-year-old, who was a small light heavyweight. It’ll be interesting to see just how his new division treats him. Will his cardio be intact? Will he be in peak fighting condition come fight night after the weight cut?

That aside, M’Pumbu’s skill comes from his striking, but he could struggle to utilize that approach in this fight. Grove has ridiculous range, which could very well hurt M’Pumbu’s chances. Grove is good at keeping strikers at bay with that ridiculous reach. However, he hasn’t really used his range to its full potential.

Grove only has a two-inch reach advantage, and that makes a huge difference in a fight like this where M’Pumbu needs to outstrike him. Grove has crafty submissions thanks to his lanky frame, and it will play to his advantage here.