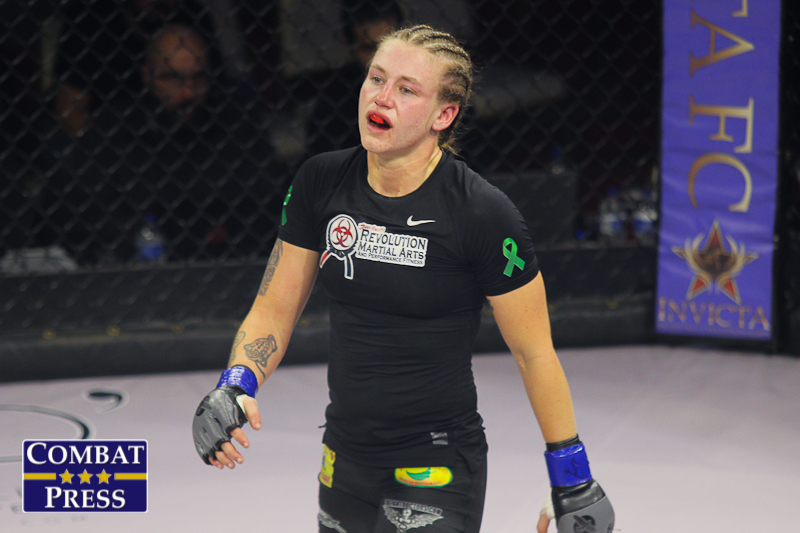 Every fighter has a reason why they fight. There must be some sort of motivation that helps them endure the pain and sacrifice they go through. For some, the money is simply enough. For others, the allure of notoriety and fame drives them. For some, the reason is more personal.

Take Alexa Conners, a 4-1 pro fighter. She fights to help bring to an end a stigma that needs to all but vanish, for it has destroyed lives for far too long.

“My father — this September, it’s been two years — he battled a mental-health illness his whole life and never got help for it,” Conners told Combat Press. “He never got counseling, and eventually it got the best of him. He killed his own girlfriend and then took his own life.

“That, obviously, was a life-changing event for my whole family. So, one of my things is ‘fight the stigma.’ I want to help spread mental-health awareness and try to help people or at least get our government to start talking about it [and] actually put money out there for people to get help, because it’s ridiculous. Our mental-health system sucks.”

Conners is taking a brave stance, showing the type of selflessness that has converted many a fan. America’s mental-health system is, to be frank, lacking and in need of repair. There’s solace to be taken in people like Conners using her platform to spread awareness and bring hope to those who thought it was all but gone.

“Everyone has something, even if it’s just a small thing of anxiety or a bout of depression,” said Conners. “Everyone has felt that, and it’s just sad. You look at the Linkin Park singer [Chester Bennington] taking his own life. What do you need to see, or what else more needs to happen, for people to finally give a shit?”

Since making this her prerogative, Conners has seen the impact it has had on others.

“Oh yes, all the time. All the time. I love it, because they see that I really do care,” she admitted. “I’m doing it for all of us. Every single fight, I will tell my father’s story. I will tell my family’s story. Then, hopefully, people will be outspoken for themselves. People will tell you until you’re blue in the face to go to counseling, but unless you finally do it, nothing will change.”

With others now counting on her, Conners has a burden to carry.

“It’s a fire that stays burning inside me,” said Conners. “[There are] days where it’s so hard and I just want to sleep and not go train, but people are counting on you. It’s not about me anymore. It’s about everyone else.”

As a fighter, Conners is preparing herself to take this platform and raise it. Though she trains out of Spartanburg, S.C., at Revolution Martial Arts, the bantamweight fighter took a few weeks to get out of her comfort zone and test herself alongside the best that women’s MMA has to offer. She made the trek to Florida and the renowned American Top Team gym.

“At first, it was like, holy shit, I’m actually working with these girls,” Conners said. “I’ve looked up to most of them. Even the coaches, I’m like, wow, I’m actually here. Just learning from them was awesome. Getting a chance to be around, like, Amanda [Nunes] — I didn’t get a chance to work a whole lot with her, but just seeing how she works out. Joanna [Jędrzejczyk] was there, so watching her and how she works and carries herself being a champ.

“I appreciate them there. They took the time to teach me stuff and were willing to help. Amanda and I got time to do some positional grappling, so again, I appreciate that.”

It’s the training and sacrifices she’s making as a fighter that Conners hopes will culminate in her reaching a goal few have achieved. Her journey continues on Thursday, when she fights Katharina Lehner at Invicta FC 25.

“I just have been able to do this full-time since about April,” said Conners. “I used to do engineering sales, but I quit that and accepted the fact that I need to commit to MMA and make this my full-time life. Thank god that people have believed in me and invested in me so I’m able to train full-time.

“The goal is to obviously get in the UFC. That would be a dream come true. I’m going to continue to trust in the process, and my time will come.”