Comfort is something that MMA fighters just can’t afford. When fighters get comfortable, they lose their edge, and then when someone gets them out of that comfort zone, things can get hairy very quickly.

Longtime Victory Fighting Championships competitor Ryan Roberts has been pushed out of his comfort zone many times in his nine-year professional fighting career. Sometimes it was for the better and sometimes for the worse, but in the long run, it has shaped him into the solid competitor he is today.

In the last decade, he has dealt with addiction, the loss of his sister, the near loss of his mother, and a handful of losses in the cage. On that same note, he is a father who has a full-time job outside of MMA, holds 21 pro wins, has fought in over a dozen different promotions including Bellator and Titan FC, and eventually returned to the VFC in 2012 to capture the bantamweight title, which he has defended three times. Like a true professional, he is ready to be pushed out of his comfort zone once again. 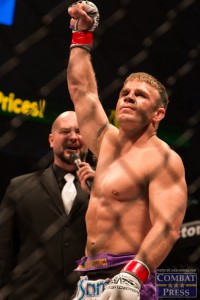 A couple days before his last title defense in late July, he was contacted by the Resurrection Fighting Alliance with a new opportunity. Considering that the RFA has been sending quite a few fighters to the UFC, it was an opportunity he could not pass up.

“I wanted to know the details, like whether or not they were trying to compete with [Ryan] Stoddard and Victory, and they said not at all,” Roberts told Combat Press. “That’s why it’s in a different location in a different town. They just wanted to offer me some different exposure.”

It was a bit of a sticky situation for the incumbent VFC champ, but nobody could expect Roberts to sit in the VFC forever, so he took the challenge and got right back into camp for RFA 30, which takes place Friday night at Pinnacle Bank Arena in Lincoln, Neb.

The Nebraska native trains at Premier Combat Center in Omaha, but he had previously trained in Denver, where he lived for some time back in his twenties. A pre-planned family outing happened to coincide with this camp, so he took advantage of some cross-training in the Denver area.

“I’ve known them all for a long time, and when I used to train out there — I’ve done a few training camps out there — I got to know Trevor [Wittman] and everybody from Grudge [Training Center], and it kind of evolved,” Roberts said. “I had a family vacation planned before I knew about this fight, over Labor Day weekend up in Breckenridge, so I decided to fly out there at the beginning of the week, and my family could just fly out there Thursday and I’ll just pick them up and we’ll shoot up there.

“It worked out well. I was able to shoot up there and hit seven gyms in five days and got some really good training in. I got some great sparring in with some tough guys and definitely was getting pushed outside of my comfort zone, which was what I was hoping for. And I didn’t get injured.”

Denver has a deep stable of coaches and training partners spread out over more than a dozen different top-level gyms. In addition to some conditioning and CrossFit facilities, Roberts was able to train at Grudge, Easton Training Center with former UFC fighter Eliot Marshall, the MusclePharm facility where the Elevation Fight Team conducts wrestling practice, and at Duane Ludwig’s new gym, Ludwig Martial Arts.

“I really liked Duane’s Holland drills class,” Roberts said. “Like, the way that was set up, that sucked for me, because I’m not used to moving that way with a lot of my combinations, but it forced me to concentrate. I felt the flow.

“Every gym I went to — whether it was Easton BJJ in Denver, MusclePharm, then down at Grudge — they all had good aspects. I was fortunate enough to tag along with guys like Drew [Dober] and Duane. Every practice was great. There’s a lot of killers out there.”

Roberts was at a higher altitude, out his comfort zone and getting a lot of different looks. That is the type of cross-training that makes good fighters great. Coming out of his last bout, he needed that extra boost.

In that last fight, Roberts found himself in a relatively strange place. He was unusually chilled out and that actually worried him.

“I was pretty nervous,” admitted the VFC champ. “[Ramiro Hernandez Jr.] is definitely not an intimidating figure to look at, but I knew how tough he was. I was kind of worried going into that fight, because I was just so calm. Normally, I would start getting focused, start getting worked up [and] start getting pissed off, but I stayed really calm. It was a surreal feeling. When I stepped in there, I felt calm, I felt collected, and I felt in control. I was just ready to go.”

All that worry was for nothing. Roberts picked up his first TKO in five years at 2:12 of the first round. Maybe it was what he had just gone through with nearly losing his mom, or just his general comfort level in the cage, but it was his most dominant performance in a long time. That’s a great tune-up for his RFA debut tomorrow night.

A few weeks ago, Roberts learned that his opponent would be Tennessee’s Adam Townsend, who trains at D-Evil Fight Team. He’s currently sitting at 13-3 in his three years as a pro, and he’s on a seven-fight winning streak with most of his wins coming by submission. The self-proclaimed redneck immediately started discounting his opponent and feels that he is an all-around better fighter and athlete. Roberts does not agree.

“They actually had thrown me a different opponent, but then they presented Townsend, and I didn’t know anything about him, but thought that was a good opponent and he seemed like a tough guy,” said the champ. “Then I started hearing some of the shit he’s been saying, and I was like, ‘Wow, this guy sounds like a stupid redneck.’ He’s pretty ignorant, and it doesn’t sound like he’s very smart or experienced. He’s been training for five years and he’s a know-it-all already. He’s got it all figured out and doesn’t need any training any place but in his hometown. He’s going to keep getting the same looks, and that’s going to make it easier for me.” 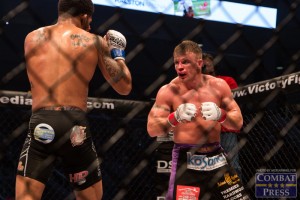 In some of his interviews, Townsend has pretty much said that he’s going to walk right through Roberts, but that’s a pretty tough claim when stepping into the cage against a 33-fight veteran. Roberts has faced top-level guys like Chase Beebe, L.C. Davis, Rick Glenn and the aforementioned Ludwig throughout his career. Townsend has had one mid-level fight against Yuri Villefort, who he couldn’t finish. Tomorrow night, the talk will end. Roberts plans on this being the beginning of a great run with RFA.

“I hope they get me some fights and keep me busy,” Roberts said. “I’d eventually like a title shot. I hope to have a good relationship there and have them catapult me to the next level. I would like to fight with UFC, and, really, I would love to fight in ONE FC. I’d love to finish my career with ONE FC.”

Well, the future will hold what it will for the 37-year-old, but the next step is Townsend at RFA 30. Roberts is constantly being pushed out of his comfort zone, and his five-fight winning streak speaks for itself.

“Hell week is the last two weeks of my training camp, and you’re pushing so hard and getting outside your comfort zone, and you’re sore as shit every day. Not a lot of people like to do it, but I need to take an ice bath every other day. It sucks so bad. It’s so hard to get comfortable. If you make it five minutes, you’re numb, but up to that you’re shivering and you lock up. Then you get into a zone and it’s not nearly as bad.”

That doesn’t sound very comfortable, but then comfort is a luxury Roberts cannot afford.

Roberts would like to thank his coaches and training partners at Premier Combat Center, the guys who welcomed him to seven different facilities in Denver, his family, friends, fans and his main sponsor, Truck Center Companies. Follow Ryan on Twitter: @AreYouReadyMMA